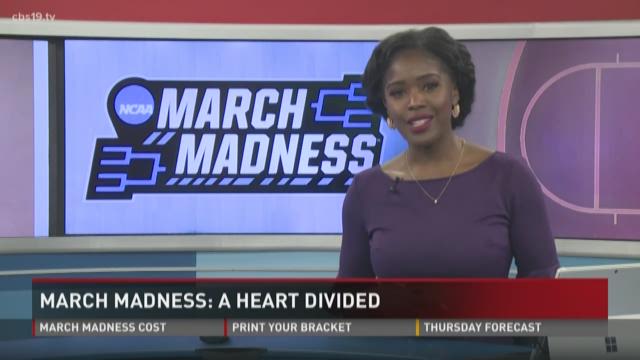 To say that SFA Lumberjack fans were excited ahead of the Big Dance was an understatement. The same went for the Red Raiders.

Fans wore their hearts on their sleeves -- and they were either red or purple.

Rachel Clark's sleeves, however, were both red and purple on game day.

Raised in Nacogdoches, Clark lived in Lubbock for six years while she attended Texas Tech. Now, she is the Coordinator of SFA's Student Publications.

As the 14th seeded Lumberjacks geared up to open the first round of March Madness against 3rd seeded Tech in Dallas, Clark said she started getting the question.

"Everyone is asking who I plan on rooting for," she said. "I'm torn, let's just be honest, im torn."

In her life, the two schools go hand-in-hand. Without one, the other would not be possible.

“Being a Texas Tech Red Raider can sometimes be a little hard because the purple pride runs deep here,” she said. "But I have a passion for SFA athletics. We moved here in the late 90's and I had the opportunity to be an SFA lady jack ball girl whenever coach Royce Chadwick was here."

“It's gotten them this far and I would love to see them go even further,” she added.

For her, the not-so-simple answer became simple.

"Wreck 'em Jacks!" she said laughing. "Here at SFA we say 'Axe 'em Jacks,' but in Raiderland they say 'Wreck 'em Tech,' so I've just merged those two and I've decided im going to root for both teams."

To make things more interesting, Clark's parents are Aggies, and her husband is a Baylor Bear. Game days with the family can get tense and when the ball's in play, there is only one way to handle it.

"There is a lot of smack talk that goes into leading up to the game, during the game and after the game," she said. "Especially if my team wins."

Clark's 4-year-old daughter is already having to ponder some tough decisions.

"My child bless her heart, shes gonna be able to pick whatever she wants to and at least somebody's gonna be happy," she said.

As for Clark, she picks both purple and red. She has a message for those who say she has to choose.

She loves both, and nothing is going to change her mind.

►Make it easy to keep up to date with more stories like this. Download the KYTX CBS19 News 2 App now.