SFA and Texas Tech go head-to-head this Thursday in the NCAA tournament. The winner will go on to the Sweet 16. 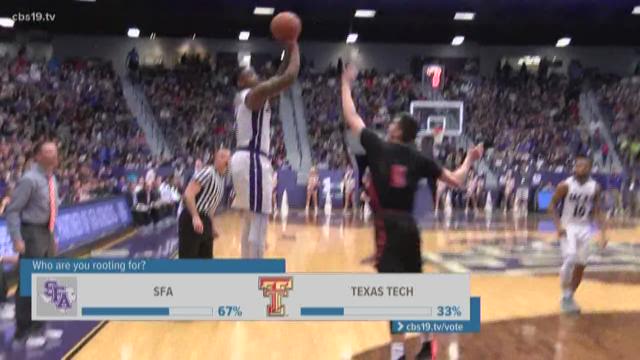 Seven teams from Texas are on the way to the NCAA tournament.

It's all part of March Madness and one of the big match-ups Texans are looking forward to is coming up quick!

SFA is the underdog in the match-up but they are known for their upsets in the tournament.

"We're known to be the Cinderella in the entire tournament." Jose Castenada an SFA alumni told CBS 19.

This is the 4th time they've made it to the tournament in the last five years.

With coaching staff and players changing out in the last year Mat O'Brien, a current SFA student, wasn't expecting them to make it.

"This team now is very young so the fact that we made it this year is very surprising," he said.

O'Brien believes SFA can make it into the Sweet 16 and even further if they play together and their leaders step up, referencing TJ Holyfield and Shannon Bogues.

►Make it easy to keep up to date with more stories like this. Download the KYTX CBS19 News 2 App now.