There's a nationwide push to allow pets in women's shelters

Purina and Red Rover are teaming up with talk show host Tamron Hall to shine light on the issue. 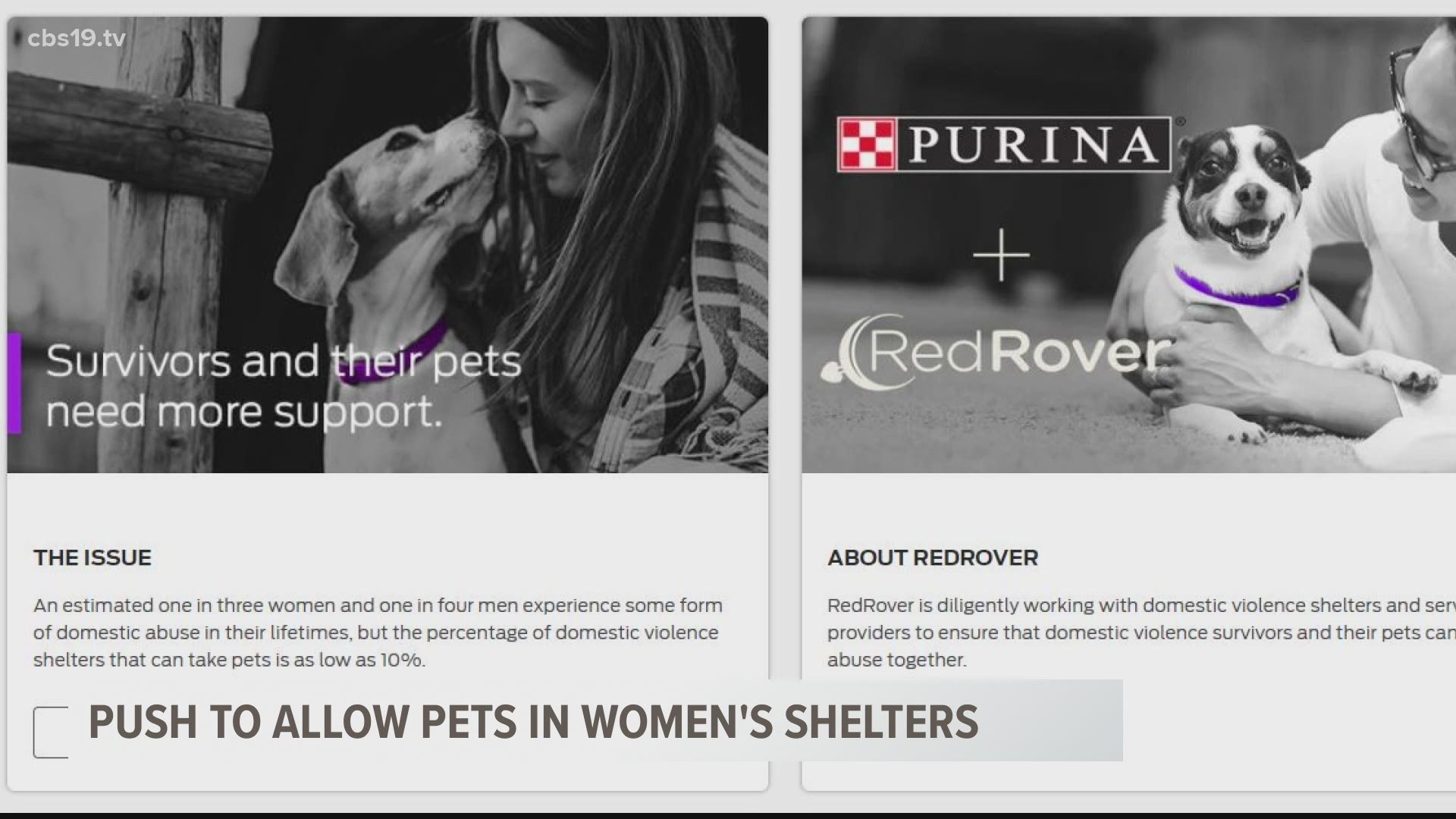 TYLER, Texas — According to the National Council of Domestic Violence Advocates, one-in-three women and one-in-four men have been physically abused by an intimate partner.

There are several reasons why people may be scared or worried about leaving a violent situation, but one shockingly reoccurring one, is the fear of leaving a pet behind.

It's something advocate and Women's Center of East Texas supervisor, Tommie Lilly knows all too well.

"For years, and all the time, we talked to women on our hotline that just totally refused to come in, if they if they can't bring their pet," said Lilly. "To hear a woman say, well, if I can't bring my dog, I'm just gonna have to stay here. But then on the other hand, she's also afraid of her partner hurting her dog. So she'll stay to protect the dog. "

Lilly says the fear of leaving a pet behind is a very common problem so just last year, their shelter was able to build a kennel, thanks to the Longview community.

"We've got this kennel, and it's really, really nice. It was built by Leadership Longview, you know so I have to give them the plug. And they dedicated last year," said Lilly.

The Women's Center of East Texas is one of only 10% of women's shelters across the country that allow pets. So pet brand Purina and talk show host Tamron Hall are trying to change that through the Purple Leash Project.

"Around 48% of survivors of domestic violence delay leaving a violent home because they don't want to leave their pet family member behind," said Hall. "The goal with the Purple Leash Project and Purina is to provide grants to shelters to be able to renovate, to have outdoor indoor pet areas to have privacy areas where owners can spend some bonding time with their pets as well and just make this as easy of a transition as possible."

Hall is a Texas native and has been an advocate in the fight against domestic violence for years -- ever since her sister, Renata, was killed in 2004.

"Knowing at the time that she was the victim of domestic violence, I really felt helpless," Hall said. "I didn't know what to do. And over the years, I grew in confidence to speak up about this problem and talk about how I felt and how I did not know how to react to it. I did not know how to support I did not know what to say. So on my journey of educating myself and growing, to feel more aware of how to deal with this and help other people, I learned about the Purple Leash Project."

The project's goal is to provide funding to shelters to build pet facilities in 25% of all of the women's shelters in the country by 2025.

"Knowing that when you leave that home, where your life is in danger, you don't have to leave your pet behind," Hall said. "And that's the goal of the Purple Leash Project."