Ziggy's Refuge Farm Sanctuary gives special needs farm animals the opportunity for a better family. It's a labor of love for the farm's co-owners. 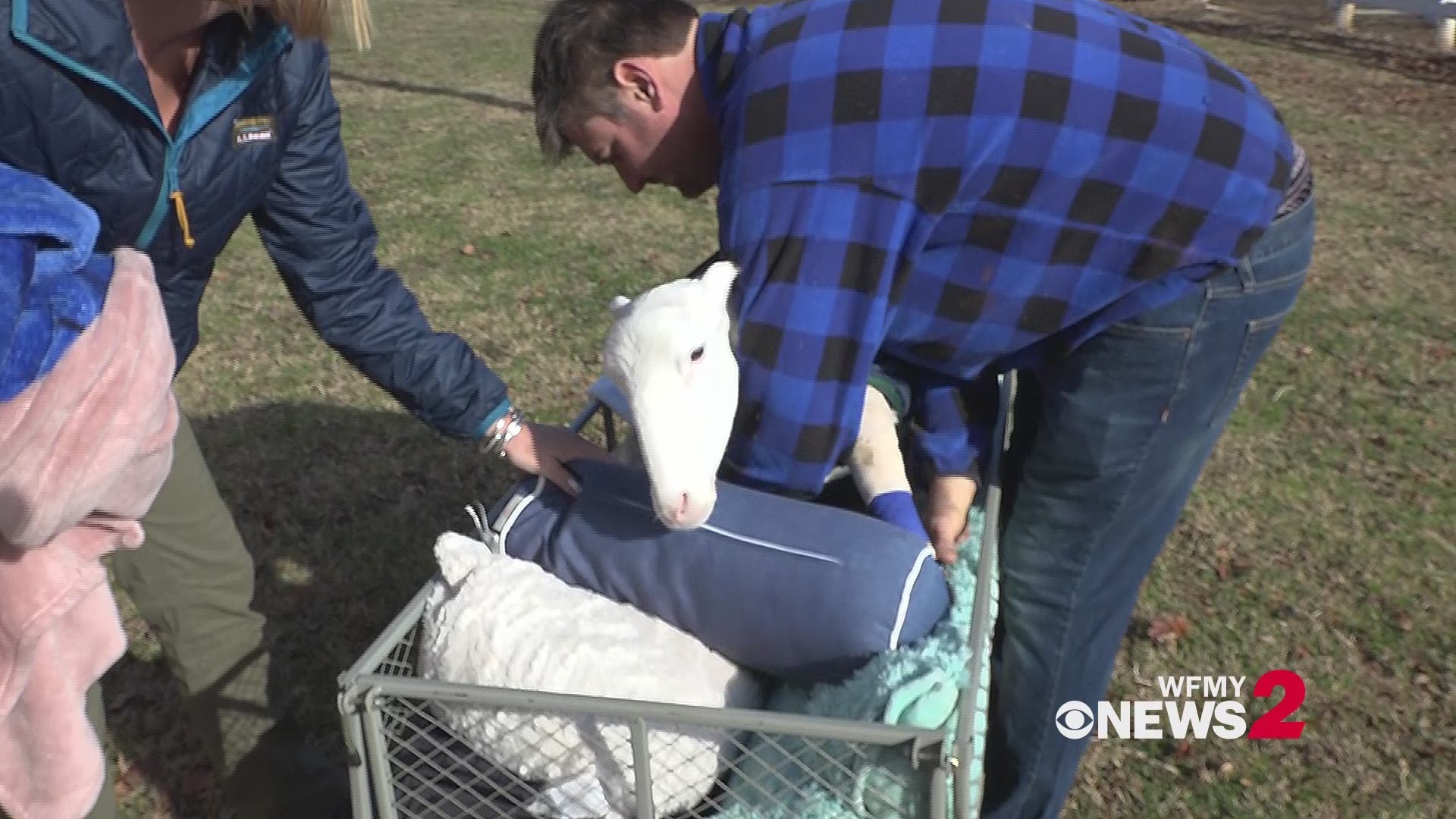 PROVIDENCE, N.C. — There's a king who governs a large plot of land a few minutes south of the Virginia-North Carolina border in Providence, NC, which is less than an hour from Greensboro. This king presides over three ponds, two barns and a white-paneled house with a sprawling front porch. He's a 300-pound spotted pot-bellied pig. His name is Ziggy. He rules here with an iron snout.

"Life around here kinda revolves around him," said Jay Yontz, one of Ziggy's subjects, "and he knows it."

"Most days, we're up around five-thirty in the morning because that's when Ziggy gets hungry," adds Kristin Hartness, Jay's fiancé.

Ziggy's regality comes with a sense of entitlement. He can be snooty, jealous and "an outright brat," Kristin said. But for all his faults, Ziggy's doting parents love him the same.

His name, after all, is part of what pays the bills around here.

"It's the life we've chosen. We wouldn't want it any other way," said Jay.

In the internet-animal community, Jay and Kristin are somewhat of celebrities. 'Step 1' to become an internet-animal celebrity: own a cute animal. Ziggy rose to internet-stardom four years ago when Kristin and Jay's engagement photos went viral. People were stunned to see in the photos, situated between smiling Kristin and smiling Jay, the heir to the throne himself.

RELATED: Ziggy's Refuge Farm Sanctuary: A place of hope and healing for animals with special needs

Endearing and comical, sure, but a laughable twist in genetics should get the credit for the smiles. Kristin obtained Ziggy nine years ago thinking he was a 'teacup' mini-pig. Nature's practical joke changed the proud pig mom's life as Ziggy grew to the size he is today.

"He already came with us everywhere, even vacations. So yeah, I just started posting it," Kristin said.

Traveling the country in a mobile home, Ziggy, Kristin and Jay began pursuing speaking opportunities as animal rights and veganism activists. Their profile continued to grow, but a new idea from Kristin gave them a chance to find a life more stable than pig pictures could provide.

"The more sanctuaries we visited, the more we realized, 'This is what we want to do.'" said Jay.

Today, their white-paneled farm home with the sprawling porch functions as one of the few special needs animal sanctuaries in the United States. It is named after their sassy landlord: Ziggy's Refuge Farm Sanctuary.

"We take in the un-adoptable animals," Kristin continued.

Every day, the pair attend to 65 animals with special needs. Blind cows, a piglet with paralyzed hips, a double-amputee goat; they all receive individualized physical therapy, food and medicine. Volunteers help with daily care, but the sun usually sets long before the day's tasks are completed.

Yet, cheeriness permeates from the walls inside the couple's home. Goats in diapers nap with Jay. Kristin shares chapstick with Hope the piglet. A wooden, hanging mural of Toby, a turkey, welcomes guests near the door. There's love here, and plenty of it.

The love can be seen as Jay feeds vegetables by hand to Moko, the double-amputee goat. The love smells like the mud and feces Kristin patiently cleans from the dining room floor. It can be heard as the pair recounts Toby's death ("one of the hardest things we've gone through," Kristin said.)

"We have 65 kids," Kristin laughed, "our parents weren't so sure about this whole idea, but now when they visit, these are their grandkids."

None of the animals are put up for re-adoption. Instead, after they recover, the animals remain under the domain of Ziggy and the patch of paradise his parents maintain.

A day in the life at Ziggy's Refuge Farm Sanctuary

"Kristin, she's the rock. I love her," said Jay, "but sometimes, I notice the stress."

Kristin handles the fundraising and social media that puts both hay in the barn and bread on the table. She's regularly is awake until early in the morning researching opportunities, despite Jay's concerns.

Bills, however, can pile up. Medical bills from complex animal surgeries cost upwards of $10,000. Local veterinarians know the pair by name. Animal food is more expensive when you can't find it at Petsmart. The hydro-therapy tank wasn't cheap either.

If an animal falls ill or fundraising efforts fall short, the realities of non-profit work can hit hard.

"When it rains around here, it tends to pour, is what we've noticed," said Jay.

Forced to shoulder those realities, the pair often have to make difficult decisions. The price of paradise is taxing, but the animals, Kristin vows, will never feel the difference.

"We make a promise to the ones that we take in. We believe we are doing what's best for the animals who can't make those choices. We want to give them the opportunity for a good life. We're not going to jeopardize their care, by taking on too much," she said.

"The self-care side of things is difficult because [the work] is never-ending. There's always something that needs to be done, someone that needs something," Jay said.

Kristin, perpetually upbeat and affectionate, lights up when talking about animals and her ideas. She sees her effort, and the toll it takes on her, another way.

"You have to make your own opportunities. If something goes wrong, I always tell people, 'It's up to you to make those opportunities.' So that's what I'll do if I have to," Kristin said.

"It's so exciting, taking these animals in the worst situations, and seeing where they can go. That's my mental health. Seeing them succeed makes me happy."

Kristin's positive attitude is seemingly the force keeping the sanctuary intact. The daily chores hum along with purpose and pep. Kisses and head pats are liberally applied to animals receiving attention. Visiting the farm, there's no indication of stress and no mention of bills.

The good parents are keeping their promise to their kids.

Next, they want to seal the promise they have made to each other.

If evidence of the sacrifices Jay and Kristin have made exists, it sits on their ring fingers.

"We've been engaged for four years," Jay said, "but since we moved here, we got too busy to actually plan a wedding."

The rings are a reminder: life is different now. The time they used to spend together has been replaced with time caring for their family.

"We don't get to go anywhere together anymore. One of us has to be here when one of us is on the road," Kristin continued, "you can never just sit back and completely relax."

"If there's anything I miss, it's that."

In the living room of the white house, Jay leans back into his seat, exhaling in agreement. After a moment, he turns to Kristin beside him.

"That isn't said as a complaint," he clarified, "yeah, it's 24/7. We'll have to get up in the night to turn Moko over. We don't get off the farm very often unless it's an emergency."

Kristin nods. The smile returns to her face.

"And then ya' gotta keep Ziggy happy," she said, punctuating her words, "and as you can tell: Ziggy. Is. Needy. He's just as much work as the rest of them, and there ain't nothing wrong with him!"

Jay and Kristin burst into laughter. They're tired. They don't seem to mind.

RELATED: Ziggy's Refuge Farm Sanctuary: A place of hope and healing for animals with special needs

RELATED: Pigs Do Fly! Hope The Piglet With Deformed Legs Flown From NC to Pennsylvania For Possible Surgery