2020 Miracle Child said to light up room with infectious smile

According to her parents, Kimber's favorite phrase is, "I do it!" They say she doesn't allow her disability to limit what she can do. 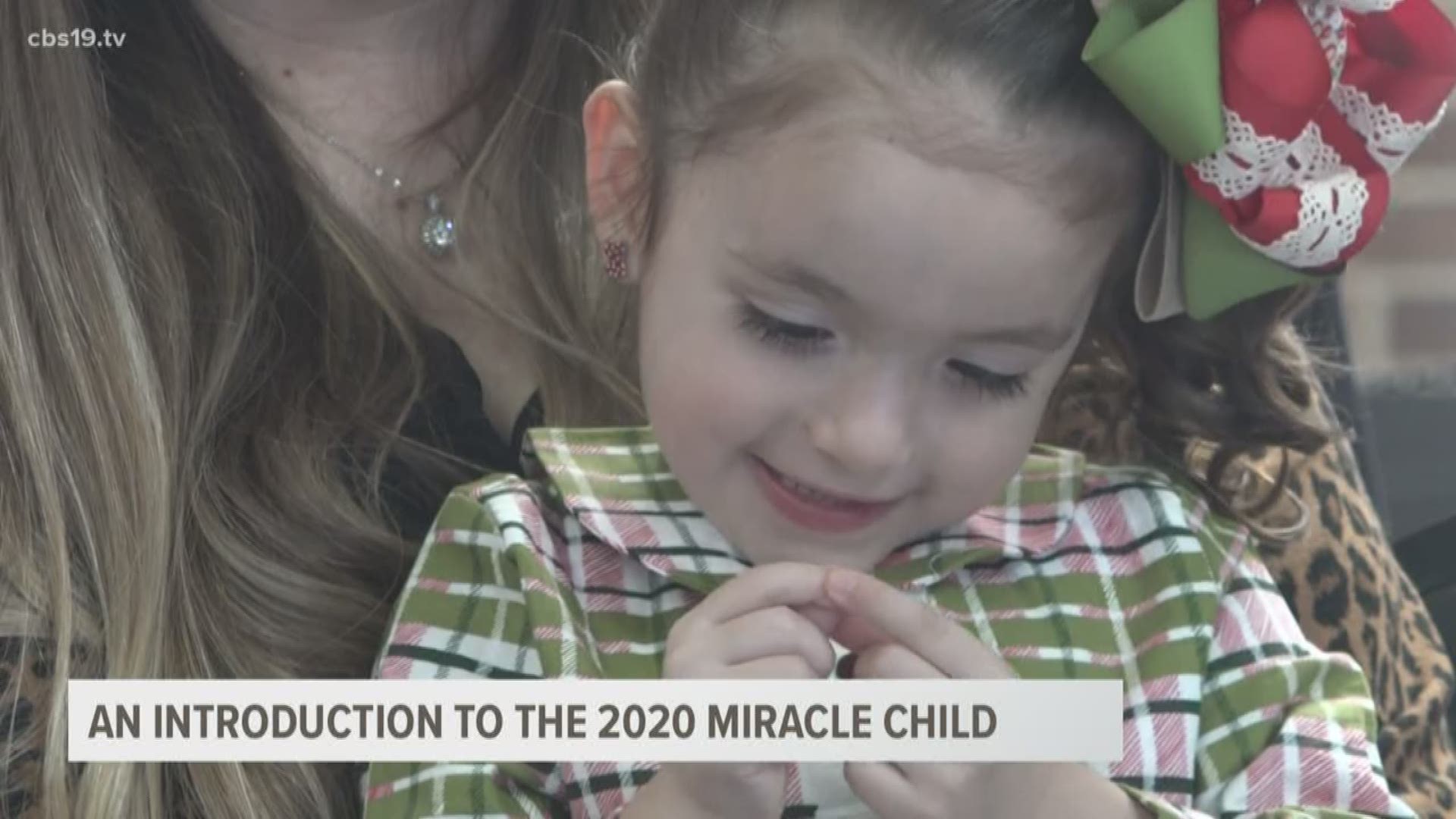 TYLER, Texas — Many would say the Christmas season in Tyler does not officially began until the city's official Christmas tree is lit. The annual tree lighting ceremony will take place this Thursday on the downtown square following the Tyler Christmas Parade.

However, in keeping with tradition, CHRISTUS Trinity Mother Frances-Tyler Hospital and Children's Miracle Network Hospitals named its latest Miracle Child, who has the honor every year of joining the mayor in lighting the city's Christmas tree.

"We feel extremely blessed that she was chosen," said Hollie De La Cruz. "The NICU at CHRISTUS Trinity Mother Frances means so much to us, because she spent the first 84 days of her life there."

Her youngest daughter, Kimber Jane De La Cruz, was named Tuesday as the 2020 Miracle Child for the hospital.

She's a 4-year-old little girl who's said to light up a room with her infectious smile.

"She was the icing on the cake for our family, the grand finale."

Kimber was born premature at 27 weeks. She weighed only 1 lb. 15 oz. and measured only 13.5 inches long. Her list of medical challenges while in the NICU included frequent oxygen saturation and heart rate drops, three blood transfusions, several days on a ventilator and months on oxygen support.

"At nine weeks, we had a follow-up head ultrasound that came back that she had some white matter damage to the left ventricle of her brain," said Hollie. "With that diagnosis, it is a wait and see diagnosis that we'd just have to wait until she got older to see what she could do and what she couldn't do."

In the months after, Hollie says she and her husband began to notice developmental delays in their daughter, and before turning one, Kimber was diagnosed with hemiplegic cerebral palsy.

"From the outside, you can't tell that she has much delay," said Hollie. "She walks a little bit different than her peers and she has a slight speech delay, but we're so blessed."

"The doctors, nurses, staff, the respiratory therapists are just wonderful people, so anyway that we’re able to give back in some small part will just be icing on the cake.”

Hollie says even through her daughter's struggles, the youngest of her four children does not let her disability limit what she can do.

"I think that’s been a blessing for her that she has those siblings that push her, to not take it easy on her, to not give up on her," Hollie said. "She’s a very independent, feisty little girl in herself."

According to her family, Kimber's favorite phrase is, "I do it!" They all say, she does it, whether asked or not.

"I hope when she’s older, she can look back and realize that hopefully she makes an impact on another family’s life, at some point,” Hollie explained.

Kimber and her family will join Tyler Mayor Martin Heines Thursday night in lighting the city's Christmas tree in a ceremony that begins at 6 p.m. at the T.B. Butler Fountain Plaza.