The plan includes optimization of the Barbara Jordan Terminal and preparing for a new Midfield Concourse with more than 10 new gates and two new taxiways. 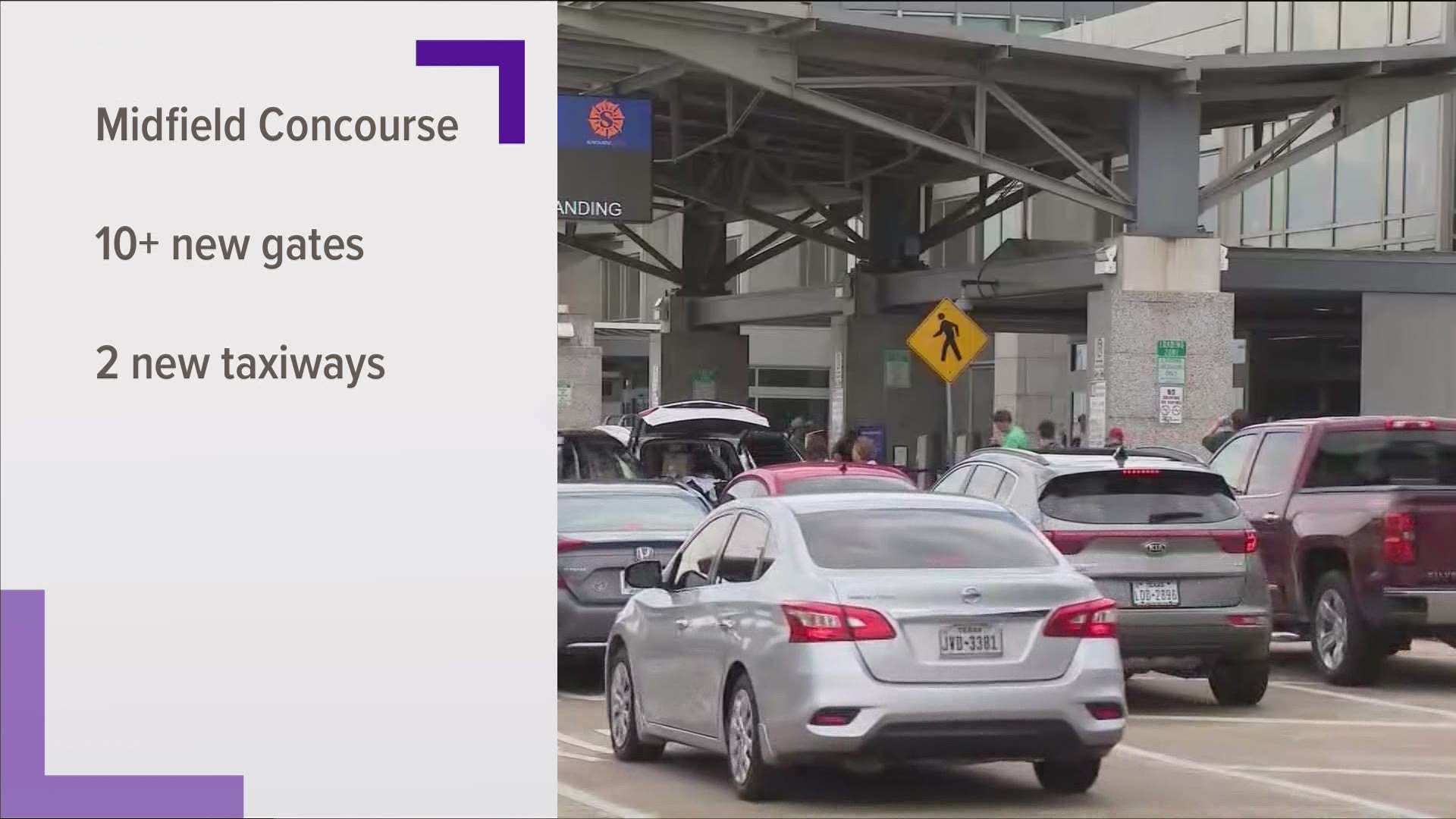 AUSTIN, Texas — The Austin-Bergstrom International Airport (AUS) announced on Tuesday the launch of its "most extensive improvement program in its history."

Since March, the airport has seen significant and consistent passenger growth. Summer travel activity is on track to match or exceed the activity of 2019. As the airport continues to experience a post-pandemic rebound, the planned improvements "will be scalable to meet a range of forecasted growth profiles and provide a foundation for future growth and development."

"With this program, we are transforming the future of AUS – without the need for taxpayer funding," said Jacqueline Yaft, chief executive officer of AUS. "We will create the infrastructure and facilities needed to support our growing city and our airline partners as they continue to invest in Austin. The Program will help us build a better airport and deliver an upgraded passenger experience – one that is not only safe, comfortable, and convenient, but also reflects the city’s distinct culture and community."

The program will include:

To prepare for the new Midfield Concourse, The South Terminal at Austin's airport will have to close and be removed within the next two years, according to a memo Yaft wrote to Austin city leaders.

"It is imperative that the South Terminal Facility be removed in a timely manner so that the development of the Midfield Concourse B can be completed in a timeframe to match the forecasted growth of the airlines at AUS," Yaft wrote.

The City owns the South Terminal, but leases it to an outside business operator who manages operations at the terminal, so it will have to negotiate "a fair and amicable result" to regain the facility, Yaft wrote. The terminal is currently managed by an outside entity, known as Highstar Capital/Lonestar Airport Holdings.

NEW: On Tuesday, the @AUStinAirport announced the launch of its most extensive improvement program in its history. Owned & operated by the City of Austin, the D2 based airport is an economic engine for Central TX – supplying over 74,000 direct & indirect jobs in the region. (1/2)

A source familiar with Lonestar Holdings told KVUE that the company was surprised by Tuesday's announcement and is exploring all options to preserve the company’s rights under their 40-year-lease agreement with the city.

As part of the process, Yaft said Austin's airport staff will work with airlines and South Terminal tenants to accommodate the change. The airlines that use the terminal, Allegiant and Frontier, are not expected to experience any service interruptions.

The businesses that operate inside The South Terminal could have future opportunities in the Barbara Jordan Terminal, Yaft wrote.

Editor's note: A previous version of this story said LoneStar was the owner of the terminal. It has been edited to reflect the City owns the terminal, while LoneStar operates the South Terminal but is not the owner.

'They will be arrested.' Gov. Abbott responds to Texas Democrats' flight to Washington, D.C.

Texas House votes to 'send for' Democrats who flew to Washington, D.C., arresting them if necessary