The Cedar Park City Council voted to approve the deal on Thursday. 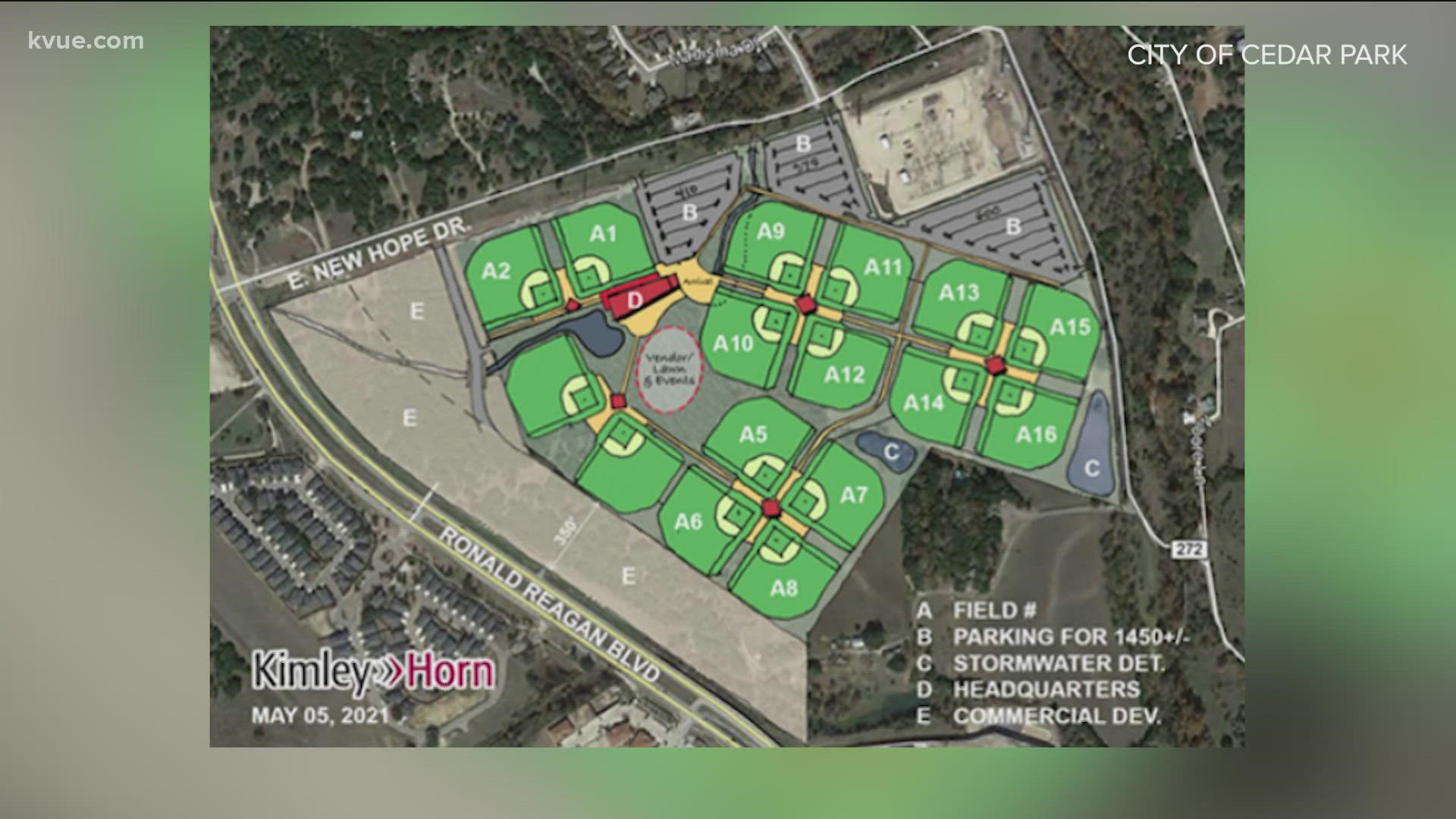 CEDAR PARK, Texas — Following ongoing issues with plans to build in Hutto, the developers of the new Perfect Game headquarters are now going with another nearby city – Cedar Park.

According to a press release from the City of Cedar Park, Perfect Game, the "world's largest and most comprehensive" youth baseball and softball scouting organization, will be building its headquarters within the city. This comes after the Cedar Park City Council voted to approve the deal on Thursday.

"Perfect Game's mission is to promote the games of baseball and softball now and in the future, by hosting the highest quality amateur events while providing meaningful opportunities and information to players, families, MLB organizations, college coaches and fans. Under the agreements, Perfect Game will lease an 80-acre City-owned tract from the City’s 4B Community Development Corporation through the next 20 years; PG Group purchased an adjacent 30 acres of land for commercial development," the City said in a press release. "Both will be located on a 112-acre tract the City’s Type B Community Development Corporation recently purchased from the Krienke family. It is located near the northeast intersection of Ronald Reagan and Whitestone Boulevards."

“Economic vitality is one of our City Council’s strategic goals, and this partnership with Perfect Game literally hits it out of the park. This project with the leading baseball and softball scouting organization in the country will generate more than $20 million in new net revenue to the City of Cedar Park and will attract an entire new economy that expands employment and business opportunities for decades to come.”

City leaders said the project is expected to help attract and grow major hotel and convention space and other destination projects.

"Teams from around the nation will come to Perfect Game’s complex for tournaments, resulting in 60,000-plus room nights in the first year and around 150,000 room nights by year 10," the press release states. "Perfect Game will also allow the City use of the ball fields for the community, local nonprofits and governmental entities for a minimum of 25 days per year with no cost to the City. The turf will be synthetic, limiting the need for landscape irrigation. Perfect Game will make an estimated capital investment of $4 million and hire 40 full-time employees."

Construction is expected to be launched in June 2022 and completed by March 2024.

KVUE last reported on the project in February 2020, when the City of Hutto dropped a lawsuit against a developer linked to the project. Hutto terminated its contract with Legacy Development due to timing and funding issues.

According to the City of Cedar Park, PG Cedar Park Group LLC will develop, operate and maintain the new headquarters.

The City of Hutto released the following statement:

"The City of Hutto is excited about the announcement last evening that the Perfect Game project will be happening in Cedar Park.

"In 2019, Hutto had planned to partner with Perfect Game to jointly develop a large-scale project including baseball fields and multi-use amenities in Hutto. As plans progressed it became clear the project was not in the City’s best interest at that time.

"This project will positively impact Williamson County, which is on the rise in the region. Hutto is excited to be part of this regional economic development that benefits all of our communities."