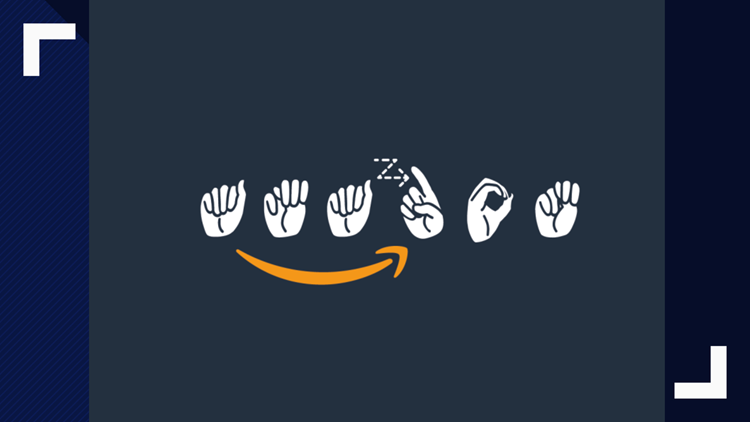 Photo by: The Amazon Blog Day One

'We wanted to create something that would be culturally positive and demonstrate Amazon’s commitment to embracing employees for who they really are,” Brendan Gramer commented in Day One blog post.
Author: KYTX Staff
Published: 7:40 PM CDT April 29, 2019
Updated: 7:54 PM CDT April 29, 2019

Amazon is introducing the American Sign Language version of its logo.

According to the Amazon blog Day One, the logo is set to help support the ASL community at Amazon, such as deaf and hard-of-hearing employees.

Brendan Gramer, a senior UX designer on Amazon's Customer Payments team led the design of the logo with a group of designers, accessibility leaders, and others.

“We wanted to create something that would be culturally positive and demonstrate Amazon’s commitment to embracing employees for who they really are,” Gramer commented in a blog post. “Because AmazonPwD was already engaged in promoting ASL as a language, creating an inclusive identity for the deaf community felt like a natural starting point.”

In his nearly 10 years at Amazon, the blog says Gramer has helped lead efforts to connect Amazonians of all abilities by helping launch the AmazonPwD (People with Disabilities) affinity group.

Gramer has been deaf since birth. However, his parents raised him orally, meaning he learned how to speak and red lips rather than sign language. Later in life, he learned ASL and realized how much he had been missing.

“I would often miss homework assignments because teachers shouted them out as the bell rang,” Gramer said.

The blog says Gramer's passion for innovation and his own experience lead him to organize a group for Amazonians interested and practicing ASL. The team worked together to accurately illustrate the ASL handshapes and fingerspelling movement, translating it to its English letter equivalent.

“The logo isn’t just symbolic, it’s a useful tool. For example, at our Post-Holiday Party, the logo was worn by interpreters to help deaf attendees find communication assistance,” Gramer said.

The blog says in addition to driving awareness and adoption of the ASL logo within Amazon. They are continuing to hire in-house ASL interpreters to work with candidates and employees.

According to Forbes, since the launch of the ASL Interpreter Program, more deaf and hard-of-hearing people have been seeking employment at Amazon, and more of them are finding placement at the company.