Are political endorsements allowed in the Catholic Church?

Bishop Joseph Strickland of the Diocese of Tyler tweeted his support of Father Altman’s video where he proclaims no Catholic can be a Democrat. 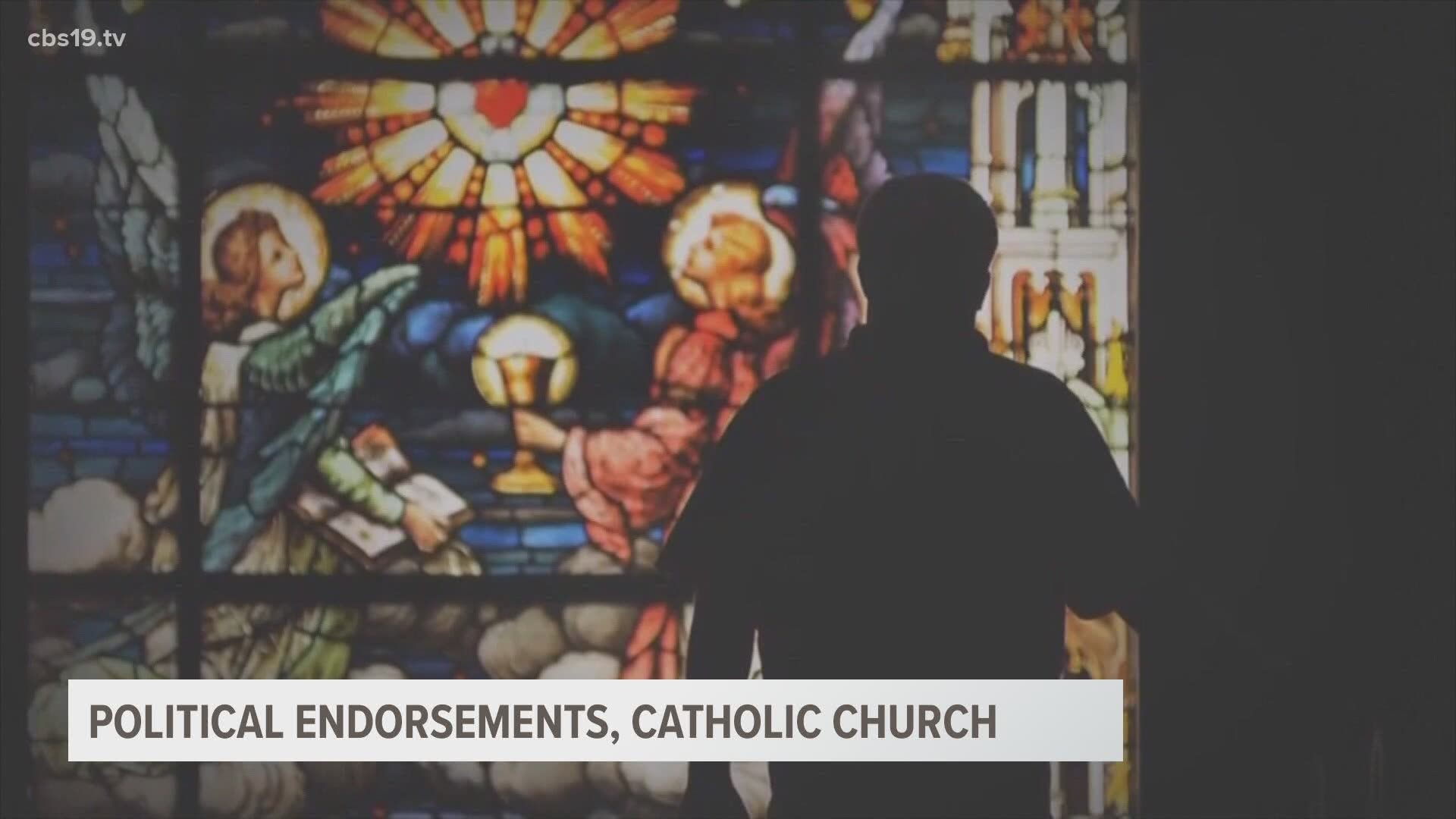 TYLER, Texas — In a viral video message, a Wisconsin priest, Father James Altman proclaims no Catholic can be a Democrat. The video has sparked thousands of comments and conversations about politics and their place in the Catholic Church.

"We're supposed to teach and let people come up you know use their own conscience to make up their own minds," said Father James Martin, editor at Large of America Media. “The church is not Democrat nor Republican neither liberal nor conservative it's Catholic."

Bishop Joseph Strickland of the Diocese of Tyler tweeted his support of Father Altman’s video in the beginning of September.

As the Bishop of Tyler I endorse Fr Altman’s statement in this video. My shame is that it has taken me so long. Thank you Fr Altman for your COURAGE. If you love Jesus & His Church & this nation...pleases HEED THIS MESSAGE https://t.co/D413G0lfQV

“As the Bishop of Tyler I endorse Fr Altman’s statement in this video. My shame is that it has taken me so long. Thank you Fr Altman for your COURAGE. If you love Jesus & His Church & this nation...pleases HEED THIS MESSAGE” According to the Catholic Church’s official code of Canon Law, Canon 287 states that priests “are not to have an active part in political parties and in governing labor unions unless, in the judgment of competent ecclesiastical authority, the protection of the rights of the Church or the promotion of the common good requires it.”

Father Martin said the U.S. Conference for Catholic Bishops and the Pope have both declared endorsing or even seeming to endorse a political candidate or party is not something church leaders should do.

In a statement to CBS19, Strickland reiterated his support of the video’s message.

“I support Fr. James Altman's video because I believe, not only Catholic Christians, but ALL God's people must ask themselves some tough questions each time they prepare to cast their vote in any local, state, or national election. Voting is not an easy task nor one to be taken lightly. On the contrary; it requires research, prayer, and discernment. We must ask ourselves- Do we believe in God. Do we as a nation believe in God?

Bishop Strickland went on to add Catholics must also ask themselves if they believe in God's commandment's and in Catholic Tradition.

“Are we willing to acknowledge our sins and seek repentance and reparation as individuals and as a nation? Are we casting our vote through the lens of Jesus Christ and his Teachings? If my support of Father Altman can prompt meaningful conversations and prayerful discernment about these questions, then I am at least beginning to fulfill my role as a pastor of souls and a disciple of Jesus Christ.”

Father Altman’s bishop released a statement which stated he would be trying fraternal correction and speaking with Altman about the video and why it violates Catholic Canon Law before taking further action.