The woman plans to speak with state legislatures about allocating funding for traumatic brain injury treatment options before the Texas legislature meet. 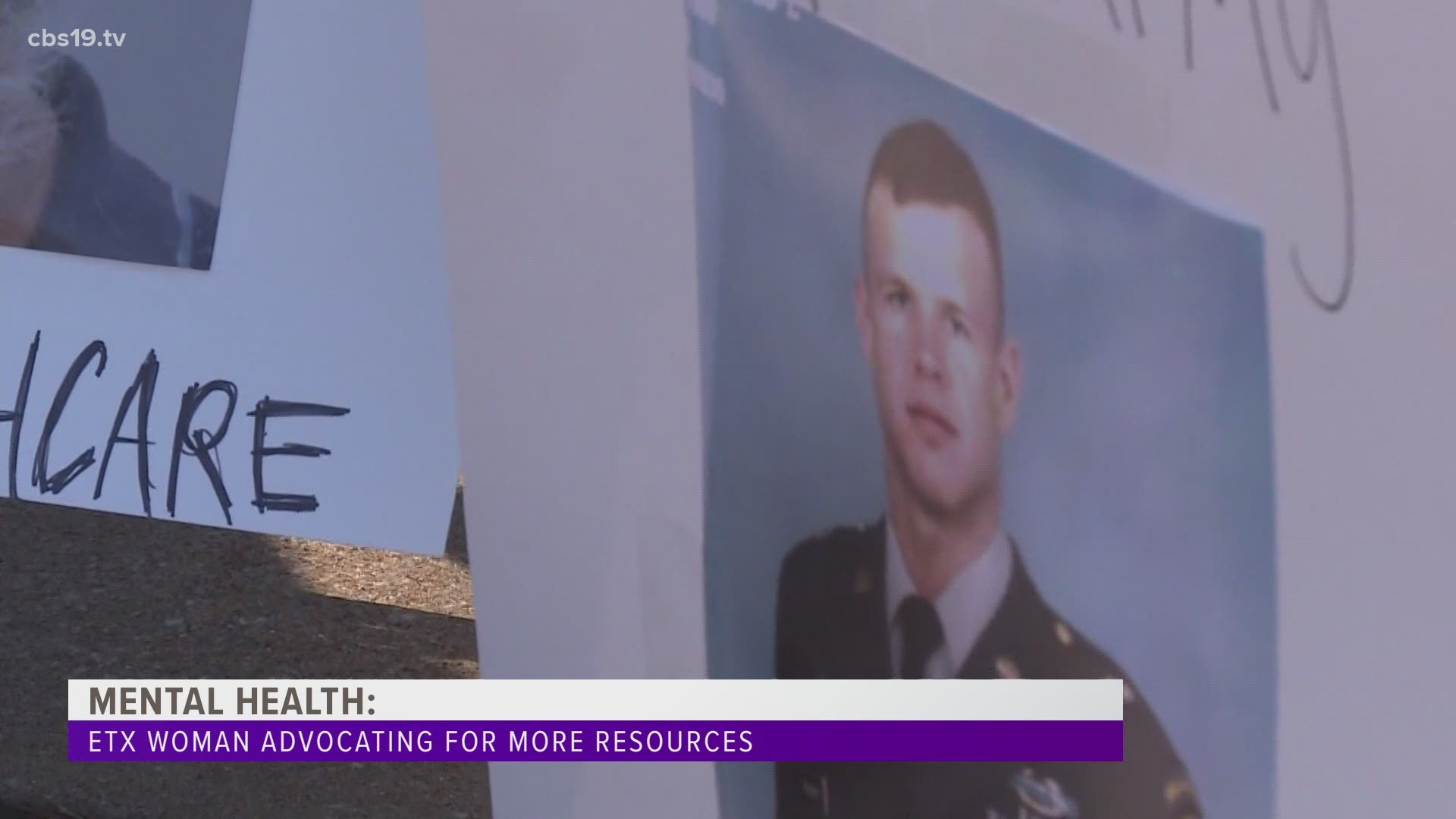 TYLER, Texas — Tara McSwain made a vow for better or for worse 18-years-ago with her husband Chris, and it's a promise she intends to keep. It is why she decided to tell his story by starting her own demonstration outside of the Smith County Courthouse on Thanksgiving and expected to last through the weekend.

She explains to people who stop to ask her what she's doing, that the couple's marriage hasn't been without its ups and downs, Chris suffered a traumatic brain injury (TBI) after serving 22 years as an Army captain.

By 2007, Chris was officially retired out of service. Doctors gave him a 50% chance of living more than 5 years with his TBI as well as Post-traumatic stress disorder. Tara says he was also then diagnosed as Permanent and Total (P&T), which means there's no chance of recovery.

"Chris has a problem communicating, and we've been together for so long that I can usually finish his sentence," she said. "Little imbalanced, you know, tripped a little bit here and there, but he wasn't weak or depressed or [had] given up."

Chris has made it 13 years since his diagnosis. Tara says they've spent their time focusing on raising their three children. However, she feels over the last 18 months Chris' illness has affected him more than usual.

"We've had some problems lately with combativeness, but he's not a mean man," Tara said. "He's the most kind father, husband anybody could ask for."

After two incidents involving his wife, Chris wound up spending the last four months in the Smith County Jail. The McSwain's haven't been able to communicate during that time.

During a court hearing in September, a judge granted Chris to be mentally evaluated after his wife advocated on his behalf. The next month, a doctor determined he was incompetent to stand trial.

"I was told that within 90 days he will be transferred to another facility to be restored," she said. "This is what hurts my heart, the VA [Veterans Affairs] has told me my husband is permanent total, there's no chance of recovery. Why in the world would they send him to restoration on taxpayer money when we know he's not going to get better?”

Now, the veteran joins a long list of other Texas inmates awaiting a bed in a state mental health facility.

Before Chris was booked into the Smith County Jail, their family and Veterans Affairs office had looked into a nursing facility for him. Tara says 18 rejected him because of his military background and there are no facilities in Texas for someone with his injury.

"He's gonna be sitting there for two years waiting for this restoration process that the state believes that he needs after being declared incompetent by a doctor,” Tara said. "I know he didn't want to hurt us, but I also understand it is time to put him somewhere where he can get the correct treatment."

There are nearly 1,500 people awaiting a transfer ahead of Chris. Tara is fearful of her husband's physical and mental health will deteriorate before he leaves the county jail.

"We need to find a treatment facility where he can live that gives them dignity and a purpose," she said. "Some people can be restored because they don't have a head injury and that process works. But the people that don't have any resources with real injuries, they need to have some other options.”

She's teamed up with, Dalila Reynoso, an advocate with the Texas Jail Project for the demonstration. The pair held up posters late into the evening on the holiday.

Reynoso says they plan to stay at the courthouse until when business hours on Monday.

The pair plan to speak with state legislatures about allocating funding for traumatic brain injury treatment options before the Texas legislature meets in January.

I’ve just received this picture from Dalila Reynoso with the Texas Jail Project. Reynoso and Tara McSwain plan to demonstrate all weekend long outside of the Smith County Courthouse. (Story coming shortly) pic.twitter.com/BecvKXzZUI

RELATED: Mental health expert on coping with seasonal depression and holiday changes amid a pandemic