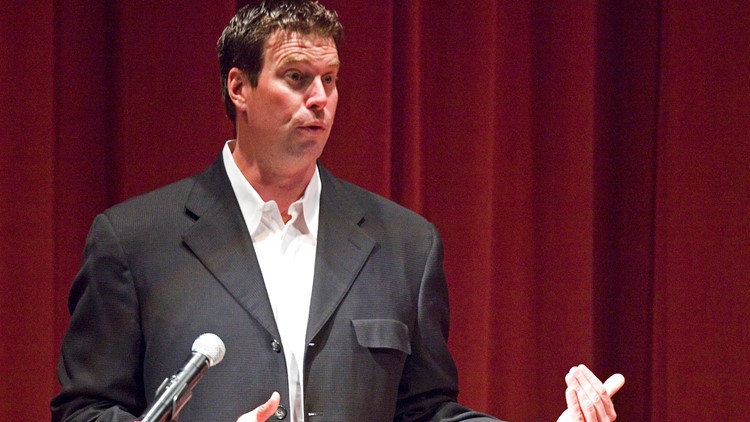 Photo by: AP
FILE - In this Oct. 13, 2011, file photo, former Washington State quarterback Ryan Leaf speaks about his first book, "596 Switch," in Pullman, Wash. Leaf has been hired by ESPN to be a college football analyst, another step in the remarkable comeback of the former Washington State star who has battled drug addiction and served time in prison. (Dean Hare/The Moscow-Pullman Daily News via AP, File)

According to the Riverside County Sheriff's Office jail roster, Leaf was arrested at 1:59 p.m. on Friday by the Palm Desert Police Department on a charge of misdemeanor battery of a spouse, ex-spouse, fiance, dating partner or co-parent, more commonly known as domestic battery.

Leaf was booked into the Larry D. Smith Correctional Center at 3:32 p.m. on Friday, according to the records. He was released on  Friday night with a $5,00 bail and awaits a September 25 court date.

Leaf played for the Cougars from 1995-1997, and led the Cougs to their first Rose Bowl appearance since 1931. He was later drafted with the second overall pick in the 1998 NFL Draft by the San Diego Chargers.

Leaf became addicted to prescription pain medication after he retired from the NFL and was arrested several times on burglary and drug charges. His last stint in prison ended in 2014 and he has maintained a clean record since then. Leaf also got sober after he was released from prison and has spoken at many events about his story.