WITHOUT A TRACE: Dozens of East Texans missing with no evidence left behind

Over the last 15 years, dozens of people have disappeared. Rusk County Sheriff Jeff Price says many of them vanished "without a trace." 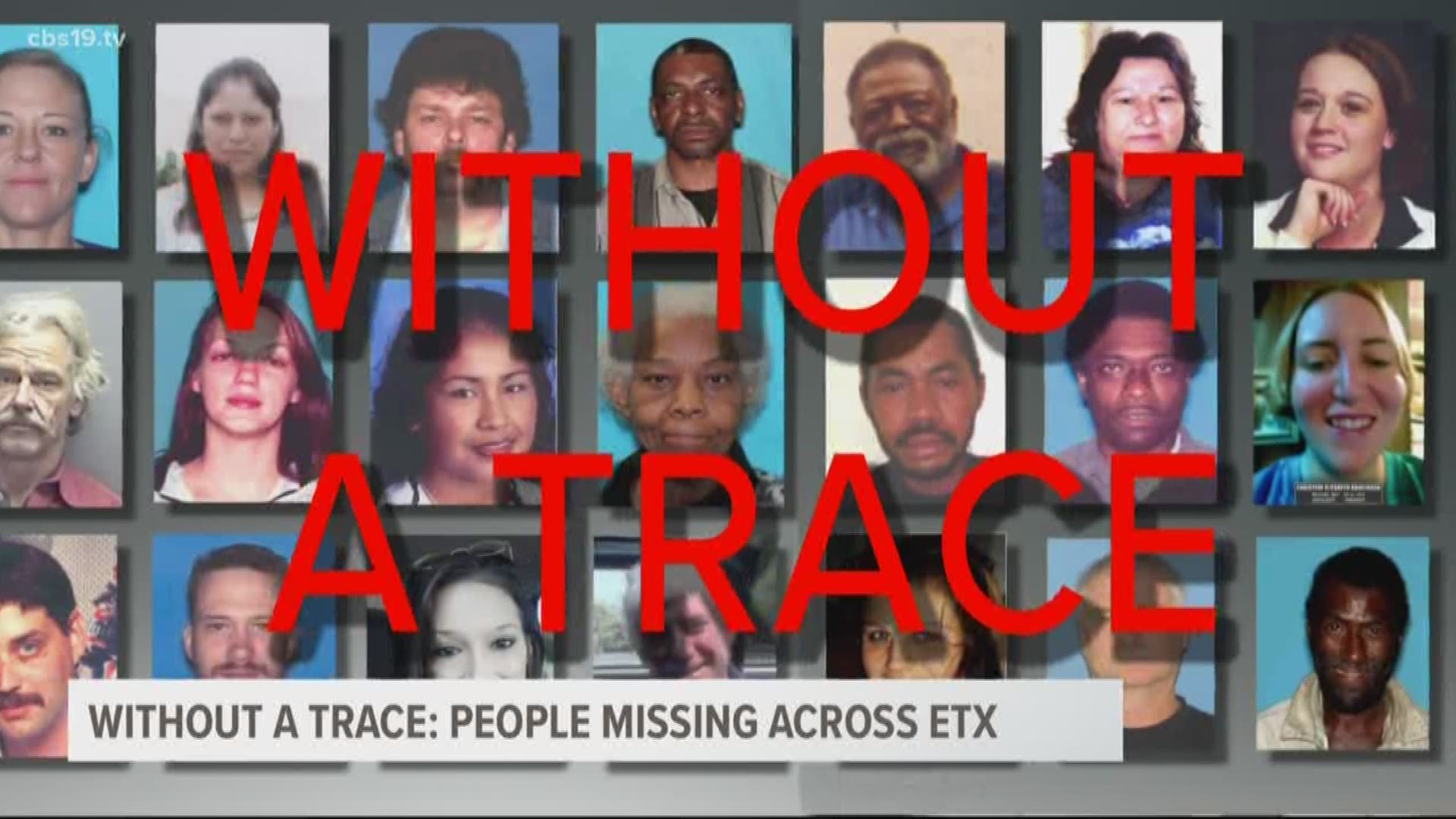 TEXAS, USA — Kim Flint, Shirley Hunt and Jimmy Tidwell are just a few of the people who are missing in East Texas.

Over the last 15 years, dozens of people have disappeared.

Rusk County Sheriff Jeff Price says it is like they vanished "without a trace."

Rusk County has one of the highest numbers of missing persons with eight unsolved cases since 2014.

Sheriff Price explains this does not just happen in Rusk County.

"I think most people will be shocked at the number of people that are actually missing, active open missing person cases in the East Texas area," Sheriff Price said.

Many of go missing with no body, no suspect and practically no evidence, as they disappear from country roads and highways across the region.

THE CASE OF KIM FLINT

One of the more recent cases in Rusk County is the disappearance of Kim Flint almost nine months ago.

RELATED: MISSING: After more than 170 days son refuses to give up search for missing mom

"We located her vehicle that was involved in a wreck, one vehicle wreck on a bridge," Sheriff Price explained.

Sheriff Price explains his deputies and others have searched hundreds of acres multiple times trying to find even the slightest hint of where Kim went or what happened to her.

"She was just wasn't there," Kim's son, James Flint said. "My mom is somewhere, something happened to her."

"That area down there where she came up missing has been searched probably 20 times or more with everything from horseback to drones, helicopters to multiple sets of dogs," Sheriff Price explained. "Track dogs bloodhounds, cadaver dogs, just every kind of a track dog that you can think of in that whole area has been covered multiple times. Never came up with any anything."

Due to not being able to discover anything in the woods surrounding the roadway, they believe she was picked up by someone.

A witness believes he saw her speaking with someone in a white pickup truck.

"If she got to ride with that guy in a truck, whether it was a Good Samaritan just giving her a ride to a different location, or whether it was somebody that picked her up and took her off," Sheriff Price said. "We don't know."

The sheriff's office is hoping the driver of that truck will come forward with more information.

THE CASE OF SHIRLEY HUNT

Another woman in Rusk County disappeared off another county road years before Kim did.

In June 2017, Shirley Hunt went for a walk and never returned.

"It was like, she made it to that one spot and then disappeared," Sheriff Price explained.

"Saw her when they(students) were getting off school bus and then she went around the corner and another man saw her. And that's the last anybody ever saw her," Shirley's husband, Bobby Hunt, explained.

Its something he thinks about every day.

"We actually had a helicopter out, we had trackers out, we had several K-9 units that were out," Price, who was not sheriff at the time of Shirley's disappearance, said about the search. "Everybody tracked her back to a specific spot and then at that one spot, we lost her."

She was never seen again.

"You never get over it. If you could just find out what happened you know, I think I can get over it but like it is, I just can't get over it," Bobby said as he described the heartache he still feels regarding her disappearance.

Like Kim Flint, they believe she got into someone else's car.

THE CASE OF JIMMY TIDWELL

That beings us to Jimmy Tidwell.

His little sister says, without a shadow of a doubt, there is no way he would have disappeared willingly.

Due to discrepancies in people's stories, all that is known about his case is that he left work and never returned.

During a search for Jimmy, they located his truck on the corner of State Highway 315 and Highway 95.

"We found his truck, we've never found him," Sheriff Price said. "So we have no clue what could have happened to him at that point."

The truck showed no signs of foul play.

While questions remain, Lynn says she does not believe Jimmy is alive.

When he disappeared she believed he was already dead due to how close the siblings were.

"I didn't believe it from the beginning, he didn't just vanish willingly," Lynn said.

People have asked questions as to why certain steps and measures have not been taken in the cases, and while Sheriff Price wishes he could do more, there are certain rules in place.

"It's not illegal to be missing," Sheriff Price explained.

That means if there are no signs of foul play, they cannot send anything off to be analyzed at a lab. They have to go off of witness testimony and information from loved ones.

So in the days, months and years that follow they re-canvas the area, talk to family and reach out to possible witnesses hoping someone might remember even the most minute detail.

"It's hard to believe of somebody, but you know we've had several people in Rusk County that have disappeared," Bobby Hunt said, "She's [Shirley] just one of several."

Kim Flint, Shirley Hunt, and Jimmy Tidwell are just three names out of more than 50 people that have gone missing in East Texas over the last 15 years.

More than 1,000 people are missing in Texas at this time.

CBS19 combed through national records, state databases and have collected information from local authorities to get an idea of exactly how many East Texans have disappeared in the last 15 years.

The following are the names we have collected:

RELATED: Mother of missing ETX woman: "If this is her then God has answered our prayers"

RELATED: Authorities searching for woman missing for more than 24 hours

RELATED: MISSING: After more than 170 days son refuses to give up search for missing mom

If you have a loved one who has gone missing in East Texas within the last 15 years, please reach out to CBS19's Darcy Birden at dbirden@cbs19.tv to have them added to the list.