On Thursday, the Democratic Club of East Texas plans to protest again outside of Rep. Gohmert's office in Tyler. 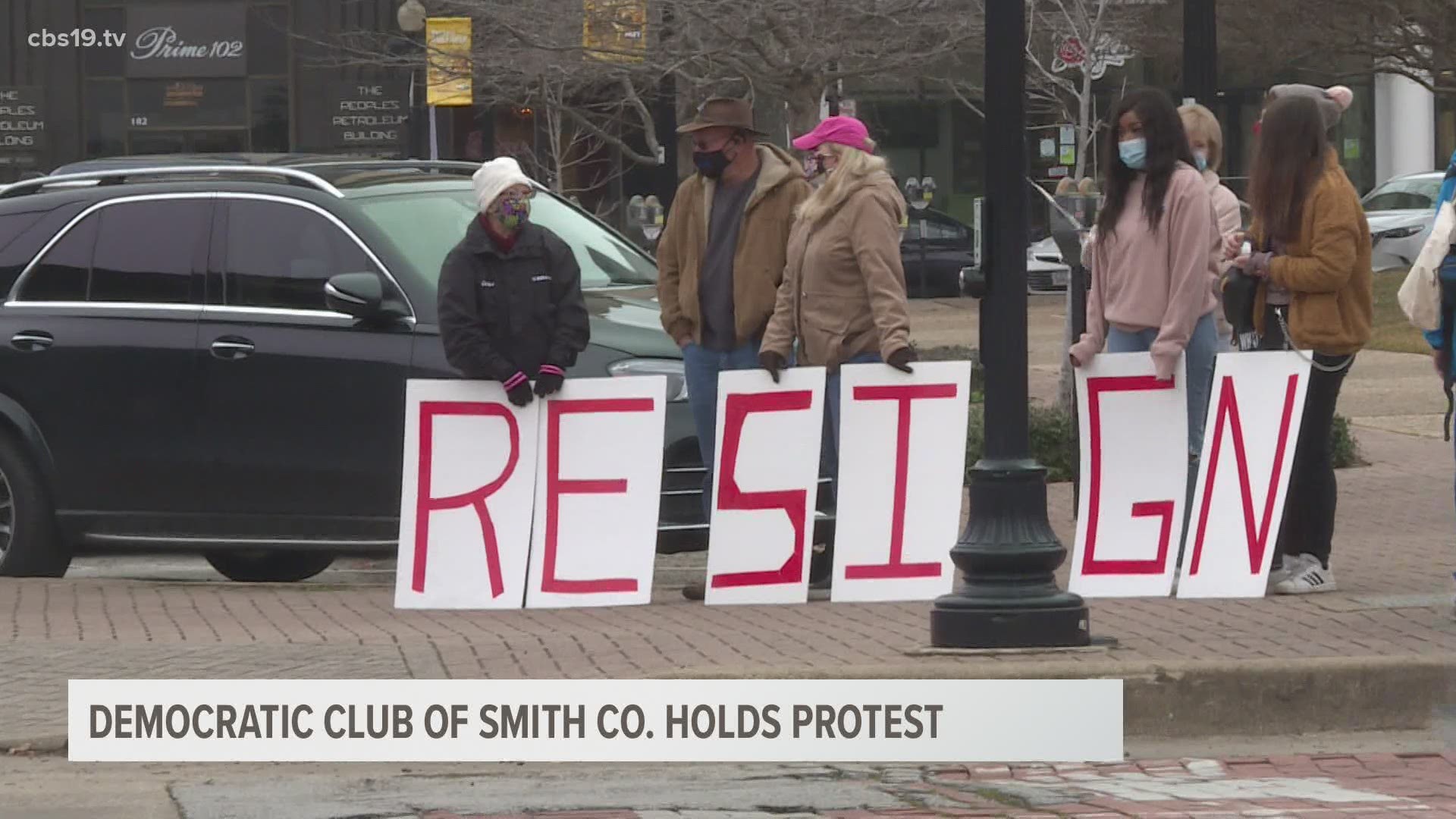 TYLER, Texas — Members of the Democratic Club of Smith County gathered at the Downtown Tyler Square Tuesday for one of two scheduled protests.

The group was protesting the recent actions Texas Senator Ted Cruz and U.S. House Rep. Louie Gohmert have taken in regards to verifying votes and filing lawsuits for the presidential election, as well as the riot at the Capitol.

There were people coming and going as the organization protested for a couple of hours in the early afternoon with the largest crowd at one point being 15.

Larna LaCroix, Precinct 77 chair for the club, said while she knows their actions today most likely will have no impact on Cruz or Gohmert, they felt it was still important to make their voices heard and to let others know they aren't alone.

"Accountability with the community is where it's going to start," LaCroix said. "Then we can vote him [Gohmert] out."

This isn't the first time the democratic club has been upset by the actions of the elected officials, but the protest comes about six months after the one last summer that turned violent.

LaCroix was in attendance for the summer protest called 'Protest Portland' organized by Hank Gilbert, Gohmert's opponent at the time for the 2020 election. During the event, a counter-protest was started by Gohmert supporters and a fight broke out, which resulted in Gilbert's campaign manager being assaulted.

Gohmert told CBS19 after the incident, "I don't know what was in the mind of the East Texas organizers, but to say you wanted to protest Portland sounds like you wanted to bring the violence from there to East Texas."

LaCroix said after the protest turned violent, several members of the democratic club began trying to reach out to Gohmert's office, but it wasn't easy to get ahold of the elected official.

Staci Oller Smith, the precinct 56 chair for the club, said for years it's been hard for any East Texas democrats to contact their representative.

“We basically just kind of stopped because we knew that we weren't going to get any movement," Smith said. "They totally ignore their own voters, they don't care."

On Thursday, the Democratic Club of East Texas plans to protest again outside of Rep. Gohmert's office in Tyler.

Back in 2017, more than 50 people came together for a protest in Tyler regarding Gohmert not holding town hall meetings to speak with constituents.

In 2005, Gohmert was first elected U.S. Representative for Texas Congressional District 1, which covers Tyler, Longview, Marshall, Lufkin, and Nacogdoches. His current term is set to expire in 2023.