The City of Garrison and Nacogdoches ISD fell victim to ransomware attacks in February. 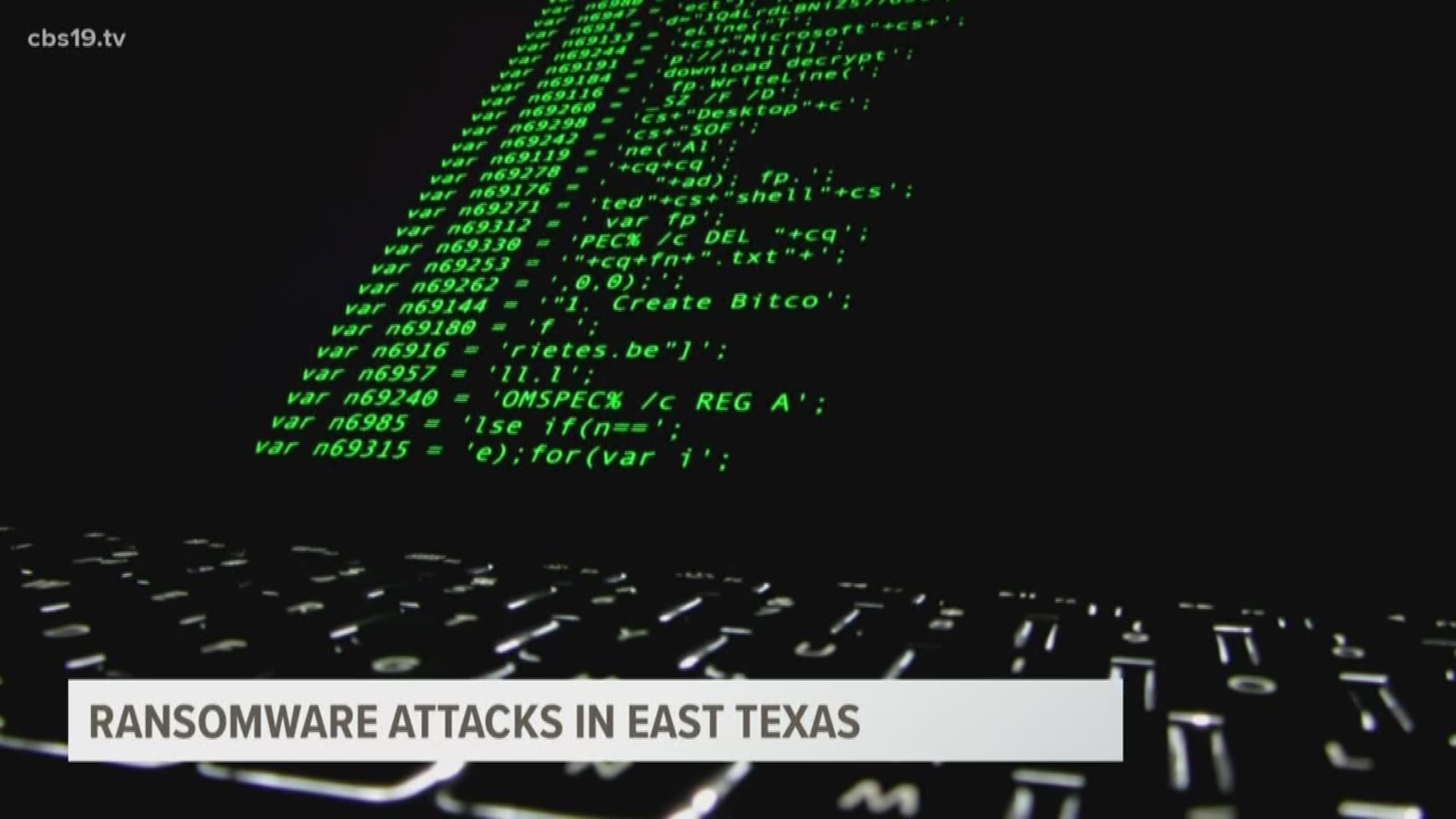 TYLER, Texas — Ransomware attacks in the U.S. are up by 41% from last year, according to security firm Emsisoft.

In February, Nacogdoches Independent School District notified parents and students they had been hacked.

"Windows would start popping up, for all intents and purposes saying your files have been encrypted," Nacogdoches ISD Executive Director of Communications Les Linebarger said.

According to Linebarger, this inconvenienced the district for several days.

"We're still slowly recovering from it. There's still PCs in the district that can't be logged on yet."

The same week, about 20 miles away, the city of Garrison was hacked.

Most of the municipal court's information is stored on its computer system, according to Wright.

"It's people's tickets," said Wright. "It's citations, fines. So, that was the biggest hit."

Despite the inconveniences, both the city and the school district are confident no information was stolen.

But ransomware is not your typical computer virus. It's a type of malicious software that uses encryption to hold your information hostage.

LeTourneau University Associate Professor of Computer Science Dr. Glyn Gowing said in order to do this, hackers target both human and technical weaknesses.

"Basically, it comes down to either you were tricked into running something or it got pushed onto your machine due to a security flaw in your web browser," Gowing explained.

Hackers then demand money to return access to users' files. For some, paying the ransom may seem like the best option.

However, Gowing said there is no guarantee hackers will cooperate.

"You have no idea if they're going to send the key or not," said Gowing. "So, the advice these days is don't send the money."

This lucrative system is one reason why Gowing says ransomware attacks are becoming more frequent.

"There's usually the profit motive," Gowing said. "But, the other motive, sometimes people just want to disrupt for whatever reason."

According to the Texas Department of Information Resources, at least 22 Texas cities were targeted in coordinated ransomware attacks in August 2019.

This followed recent attacks in other cities across the U.S. which prompted Governor Greg Abbott to order a "Level 2 Escalated Response," the second-highest level in Texas' emergency response protocol.

Law enforcement investigating February's attacks in East Texas do not believe they are related.

"The single biggest thing that you can do is actually the least expensive thing, educate your users," Gowing explained.

He said it's important to update your software regularly and to keep backups of your information. Gowing also recommended users be wary of suspicious email attachments or links.

"If it sounds too good to be true, it probably is," said Gowing.

LeTourneau University also offers a certified cyber security specialist program for the public. It consists of a series of courses, designed to teach people about attack and defense on networks. To learn more, visit their website.

The U.S. Department of Homeland Security also offers additional tips to hep reduce the risk of a ransomware attack. Visit their website to learn more.