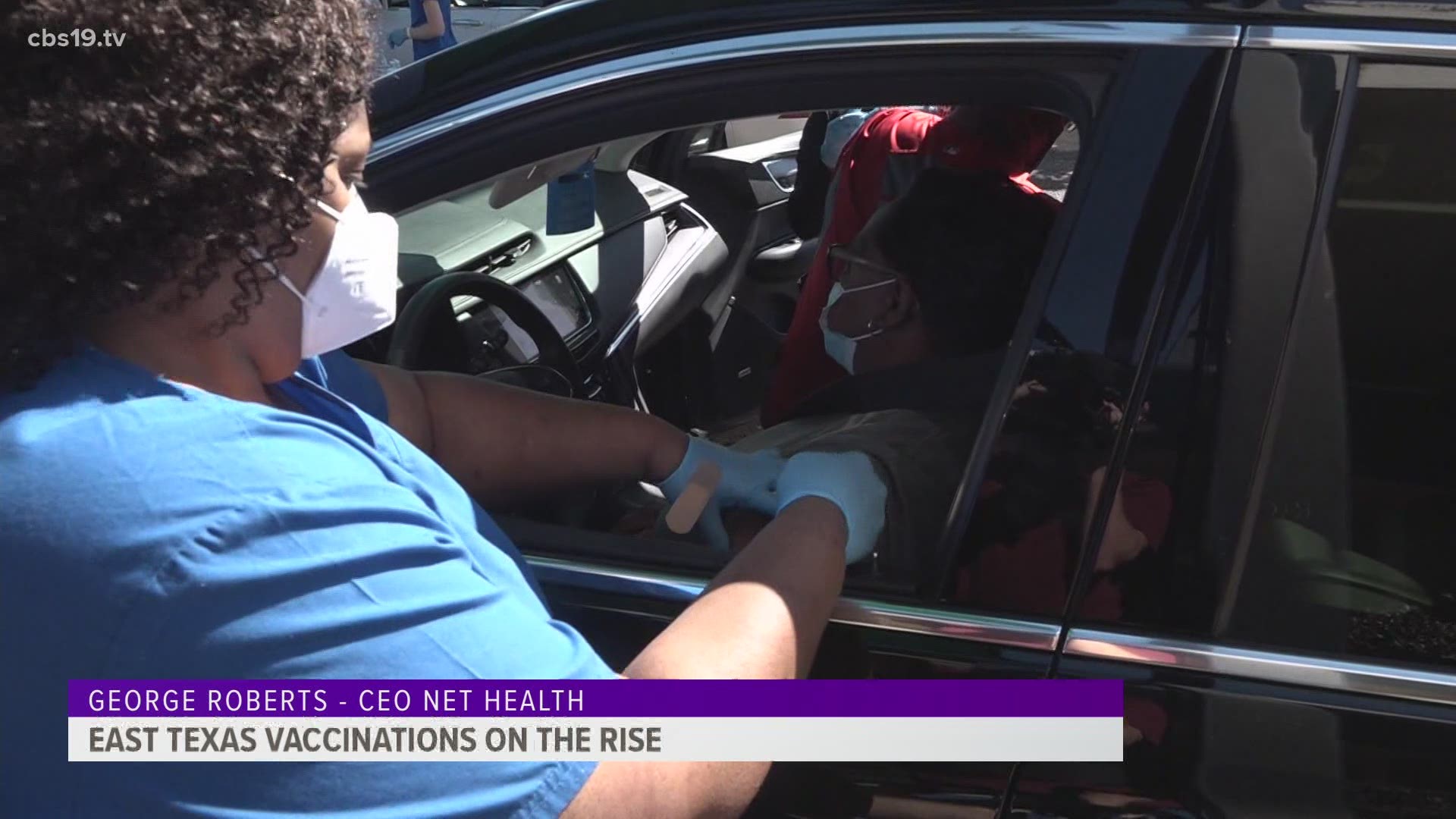 TYLER, Texas — When the first COVID-19 vaccine became available in December, Net Health CEO George Roberts says they began hosting clinics twice a week and were able to give out 500 to 600 shots a day.

Now, with three options on the market and supply easier to access, vaccine clinics have increased to five days a week with 1,500 to 2,000 vaccines administered each day.

"If you count, the total number of doses we've given, counting first and second doses, is close to 30,000 through December,” Roberts said.

NET Health received a shipment of 3,510 Pfizer doses for this week. Roberts says the state switched the health department from Moderna several weeks ago because the Pfizer vaccine would be easier to provide.

"We now see a better supply and we're more confident of supply that we're receiving," he said.

However, the February snowstorm led to shortages of the Moderna vaccine for people needing second doses through NET Health. Roberts says they now are in good stock and encourages people to come and complete their vaccination no matter when they received the first one.

"I've never heard anything from the CDC that says, well if you're delayed on getting your shot, you need to start your series over again,” he said.

Recently, Texas opened up eligibility to K-12 school teachers as well as anyone 50 and older.

NET Health was able to vaccinate people about 50 people from a vulnerable population as well on Saturday with the help of the Tyler Street Team.

Callynth Finney with the Tyler Street Team, a nonprofit that focuses on homeless resources, says it took two weeks of going out into the community and identifying those without a home who would be interested in receiving a vaccine before they were able to make it happen.

"There were a lot more than that, that we asked, but several of them were scared to do that [vaccine], you know, believing that it would harm them," Finney explained. "I'm hoping that we'll have another opportunity, that they will see that those that did [get a shot] are okay and that they will decide maybe to take the next opportunity for that."

She says the Tyler Street Team plans to go back out into the community at some point to see if more people without a home would be interested in receiving the shot. Finney estimates there are about 300 people in Smith County who fall into the homeless category after a recent survey conducted over one day, counted 200.

Roberts says the goal of getting vaccines out to everyone in the community is getting closer.

"We're starting to see some real impact to the vaccine right now," Roberts said. "We're seeing the numbers in the hospital go down and that people are less sick. That's one key element, I think we can point to.”

As the amount of vaccinations increase, the number of COVID-19 testing for the NET Health region has been on the decline. From Sept. 13 through March 15, there have been 191,961 tests.

"It seems like the positivity rates are going down, so I think that you know adequate testing is going on right now,” Roberts said.

Roberts says even though the positivity rate is down, people should continue to be cautious and practice social distancing.

RELATED: Over 7,000 vaccines wasted in Texas; Here's what went wrong