Lots of teens are vaping THC and if they bring it to school in Texas, it's a felony

The CDC and the Food and Drug Administration said Friday that they are investigating 215 possible cases of severe lung disease linked with vaping. 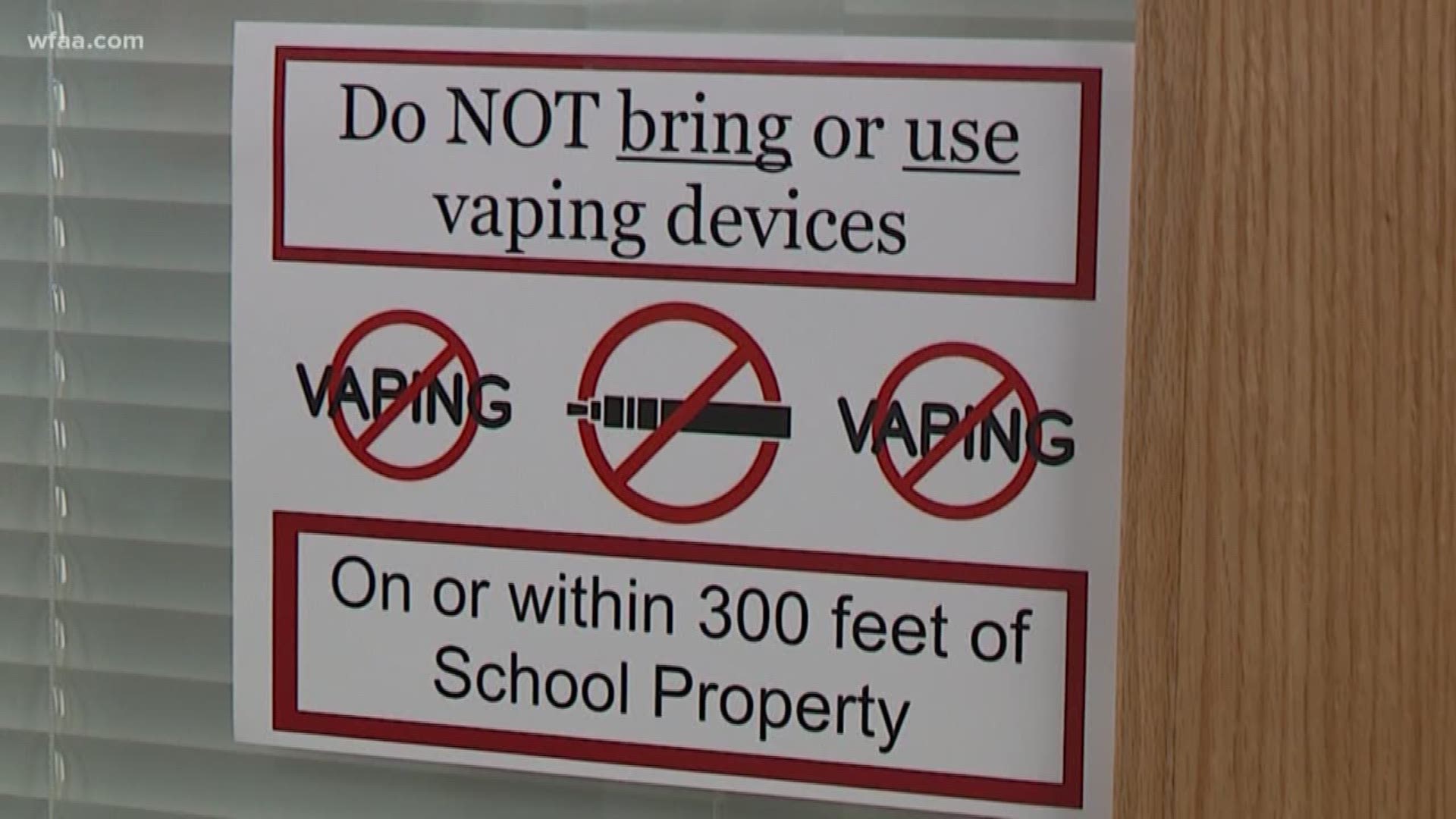 RICHARDSON, Texas — It's short, but Richardson ISD is making students watch a nearly three-minute video that explains how vaping an illegal substance on campus could result in jail time.

It's a fact that 23 students had to learn the hard way when they were charged with possession felonies and expelled during previous and current school years.

On Friday, The Centers for Disease Control and the Food and Drug Administration that they are investigating 215 possible cases of severe lung disease linked with vaping in 25 states.

As of Tuesday, the Texas Department of Health and Human Services is investigating 13 cases, two of which have been confirmed.

Doctors say the illnesses resemble an inhalation injury, with the lungs apparently reacting to a caustic substance. So far, infectious diseases have been ruled out.

Symptoms include shortness of breath and chest pains and some patients have experienced vomiting and diarrhea.

The FDA is testing products that were used by sick patients to see if there's a common link in any e-cig compounds or if those compounds are illegal in nature.

"Even though cases appear similar, it is not clear if these cases have a common cause or if they are different diseases with similar presentations, which is why our ongoing investigation is critical," the statement said.

Some recurring e-cig compounds aren't harmless and can contain heavy metals, cancer-causing chemicals, volatile organic compounds and some flavoring that might cause pulmonary issues.

At this time, officials haven't identified any specific product or substance as the cause.

But, the CDC and FDA said Friday in a statement that in many of the cases they're investigating that, "patients have acknowledged recent use of tetrahydrocannabinol (THC)-containing e-cigarette products."

Even though officials are investigating whether nicotine products or THC products are to blame, the CDC warned to not purchase any products "off the streets."

Vaping THC not only has a possible health setback, but it's also a quick way to get charged with a felony in Texas if you're a student.

But not a lot of people know that, including 23 students at Richardson ISD who were expelled last year and this year for bringing a vape that contained an illegal substance.

A district spokesperson said the students faced expulsion after they were arrested on felony drug charges.

The district is tracking all things e-cig and told WFAA that it confiscated more than 200 vaping devices during the previous school year.

Since school has started, the district has taken up six e-cigs from students.

School leaders handed out 114 disciplinary actions to students who had e-cigs since the previous school year, according to a district spokesperson.

"The THC, the marijuana derivative is a huge concern for ours," Gibbins said. "You would be amazed at how many students and parents simply did not know that could result in a felony arrest."

Dallas District Attorney John Creuzot said he will not prosecute low-level offenses but in the State of Texas, bringing an illegal substance to a drug-free zone, such as a school is a state jail felony.

If convicted, it could put someone in jail for up to two years.

Richardson ISD is educating its more than 35,000 students about that in a new video they require them to watch.

The video depicts the health dangers of e-cigs and how a student is arrested because they brought a vape with an illegal substance to school.

"We want to make sure that we’re educating the whole child and not just focusing on that one area of academics," Gibbins said.