DONATE: Family with father in ICU speaks out about antibody shortage in East Texas

As COVID-19 cases rise, East Texas hospitals are in critical need of convalescent plasma donors. A family speaks out about their father who is fighting for his life. 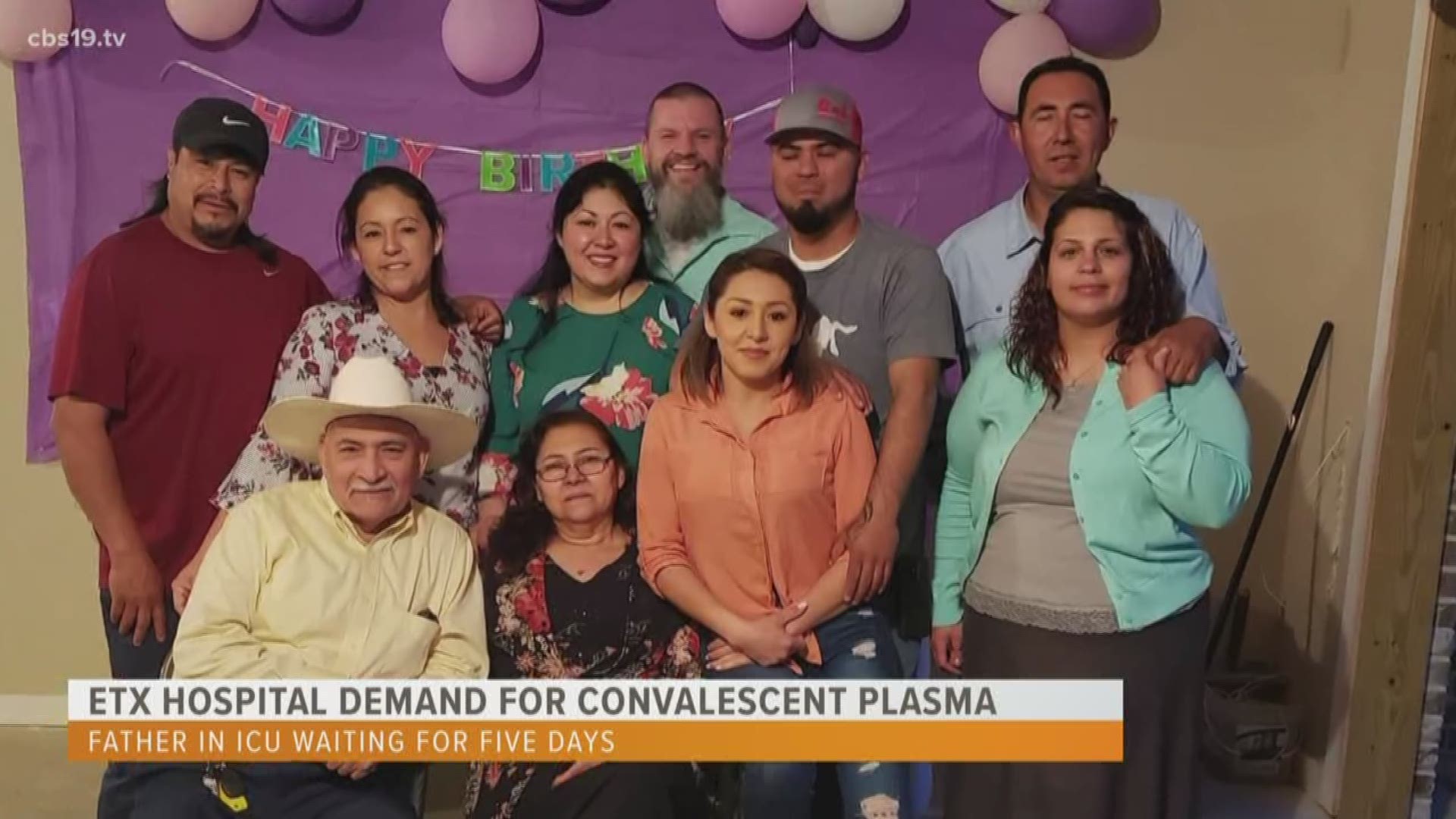 While there is no drug that can treat COVID-19, those who have already had the disease have antibodies that can boost patients' with severe cases of the disease ability to fight the disease. These antibodies are called convalescent plasma.

As COVID-19 cases surge in East Texas, and across the country, there is a critical need for more convalescent plasma donors. Two East Texas families know that reality as much as anyone.

“When I arrived [at the hospital], they just looked at him and they go like, you know, he's dying,” Dolores Price, whose father Jose Gonzales is an ICU patient at CHRISTUS Trinity Mother Frances, said. “I’m like what do you mean he is dying? They're like he's not getting any oxygen in his body."

Following the 4th of July weekend, members of the Gonzales and Price family began testing positive for COVID-19. Husband, father and grandfather Jose Gonzales was eventually taken to the hospital.

“How quickly it progressed,” Jose's son-in-law Hunter Price remembered. “He wasn't feeling well for a while, but then, with the changing color and everything like that, and then it turned out initially when I checked into the hospital, that his O2 stats were down to about 78%. I mean, that's organ failure range.”

"He has the ventilator,” Dolores said. “I asked, you know, like, I don't even know what to ask anymore because they're just pretty much telling us, you know, he's still alive."

Gonzales is on a waiting list to receive convalescent plasma for five days now, and is one of more than 100 people that Tyler Carter Bloodcare says are in need.

"We went from, you know, distributing probably 25 to 35 doses per day, all the way until about the middle end of May,” Clinton McCoy, director of operation at Tyler BloodCare said. "Then as the cases have increased, we've gone to where now hospitals are ordering 120 doses per day."

Carter BloodCare says orders from local hospitals for CCP are four times greater now than in early June. They are currently averaging about 10 to 12 donors per day, but they need 40 to have optimal supply.

"With every plasma donation, we can get usually between three and four doses off of one one donor,” McCoy said. “One person comes in, they're going to help out three to four people with their donation. We get 40 a day. That's 40, 80, 120, 160 doses a day we'd be collecting. We'd be actually ahead of the ballgame on meeting hospital demand."

"You can literally say that you're saving lives,” Dolores said “I told him, I love the way that he put it. I mean, you have the gift of healing flowing in your veins. Who wouldn't want to say, 'I gave blood and I saved three lives?'"

Dolores said while she hopes to see her father receive the donation he's been waiting for, sharing his story could help hundreds of other patients in need.

If you or someone you know has recovered from COVID-19 and would like to donate convalescent plasma, visit carterbloodcare.org to learn more. CCP donors must meet other blood donation eligibility requirements.

You can also donate at the American Red Cross.