Decades of mistreatment at the hands of doctors and the federal government have led to distrust among African-Americans that lingers today. 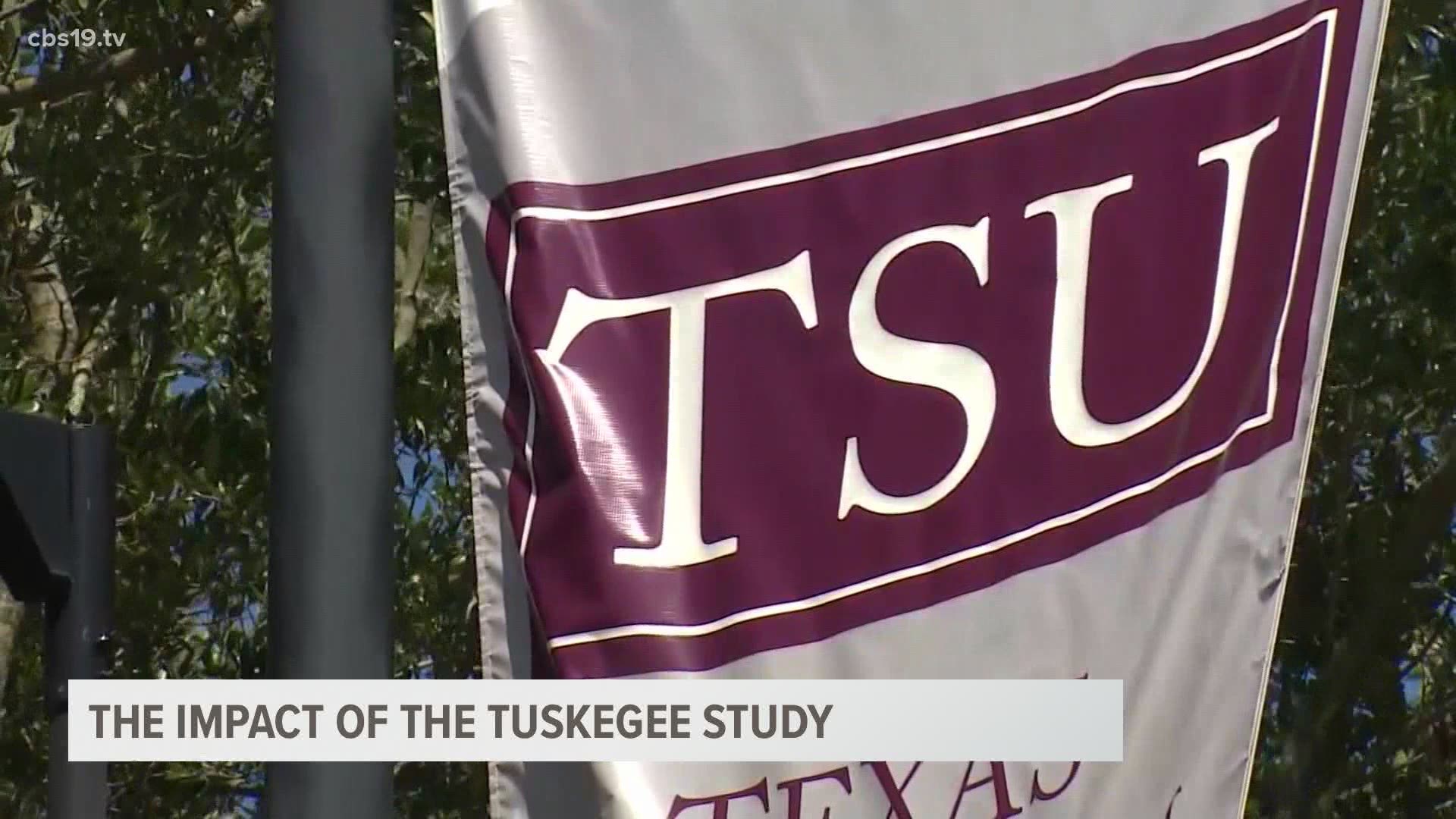 TYLER, Texas — Vaccine hesitancy is one of the things public health experts worry could prevent us from putting a stop to COVID-19. There are lots of reasons why someone would want to wait a while to get vaccinated, or not want it at all.

African-Americans as a group report being less interested in getting the shot than other racial or ethnic groups and an old experiment is often cited as an explanation.

In a game of word association, if someone said, “Tuskegee,” most people would think of the Tuskegee Airmen, America’s first Black fighter pilots. But, as celebrated as they are, on the other end of the spectrum in American history is the Tuskegee Study.

It came from the same town, but instead of showing America at its best, it’s one of the ugliest chapters in the nation’s history.

“The actual title of that experiment,” Tomiko Meeks said, “was the Tuskegee Study of Untreated Syphilis in the Negro male.”

Meeks, a professor of history at Texas Southern University, is teaching about the experiment in one of her courses this spring. She says few of her students knew about it entering the lesson. “Out of those two sections,” she said, “probably in a total of like, 75 students, probably 10 [knew about it].”

The experiment began in 1932, so it is hard to blame young adults for not knowing much about it. “And what the way that is starts,” Meeks said, “really, is that they were trying to, I would say, do good.”

The U.S. Public Health Service, the precursor to today’s Department of Health and Human Services, chose Tuskegee, Alabama as the location in which to study syphilis because it had a high number of cases at the time. 600 participants were chosen.

“There are about 400 men who test positive for syphilis, right,” Meeks explained. “And then you have this control group of about 200 men who do not have the disease. And so, the whole idea behind the study is to not treat the men who have syphilis and to follow them until they expire.”

Meeks says the theory at the time was that syphilis might affect African-American men differently than White men. In White men, the disease was presumed to cause insanity, but since Black men were thought to be less intelligent but physically stronger, doctors thought it might cause greater damage to their hearts.

The study was initially funded in large part by Julius Rosenwald, the president of Sears, Roebuck, & Co. and one of the most generous philanthropists of the time. Meeks says he paid for museums and schools and was interested in the betterment of Black people in the south. He would eventually stop giving money to the study as the Great Depression continued, but that was not enough to stop the doctors in charge of it. It continued through World War II, as well. Meeks says the study’s subjects were kept from registering for the Armed Services so they would not be treated for their illness.

“Then 1947 is another moment,” she said, “because that's when penicillin becomes available and you can treat them. But again, they're not receiving the treatment.”

The experiment continued all the way until 1972, 40 years after it began when a whistleblower within USPHS told a reporter from the Associated Press and got the story published in newspapers across the country.

Not surprisingly, most of the subjects died before the study ended, especially those who were positive and untreated. A document created in 1968 showed that, of the 182 men in the initial control group, more than 53% had died. Of the 443 who had syphilis, more than 62% had died.

“There wasn't even an apology for the experiment until Bill Clinton became president,” Meeks said. “So not even in ‘72 when the experiment comes to an end, right? Not even then did anyone apologize. Like, the history of African- Americans of having atrocities perpetrated upon them, and no one apologizes for that? No one, you know, is trying to atone for these heinous acts that are perpetrated on black bodies.”

The federal government eventually agreed to a $10 million settlement with the subjects and their families.

While Meeks says most of her students had not heard much about the experiment, the distrust of the government and health care system it created have been passed down from generation to generation. Now, they collide squarely with the COVID-19 vaccination effort.

“And then all of a sudden, right, we have a vaccine,” she said of a common feeling among African-Americans. “It feels like all of a sudden, but in reality, right, this is research that they have been working on for years. And so, it does come out much quicker than, you know, normally a vaccine that would maybe take 10-20 years [to] come out.

“And so, when you have someone say to you, ‘oh, no, no, no, no, I'm not taking that vaccine because I remember Tuskegee,’ it's like this historical memory that African-Americans have experimentation on Black bodies.”

She noted that, just as syphilis could affect anyone but was more prevalent among Black people, COVID-19 has more severely impacted Black people and people of color, adding to the skepticism many have.

Like many other systemic challenges, Meeks believes representation is the best way to change opinions about the importance and value of the COVID-19 vaccine. People need to have, “doctors who look like you, other health care professionals who look like you,” she said, “and you feel comfortable, right, going in and talking to those individuals.”

A recent survey from the Kaiser Family Foundation showed that African- Americans are becoming more likely to want the vaccine but are still less likely than White or Hispanic people to say they will definitely get it.