Schaefer, a leading member of the Texas Freedom Caucus, said Gov. Abbott's order to close all bars would have devastating consequences 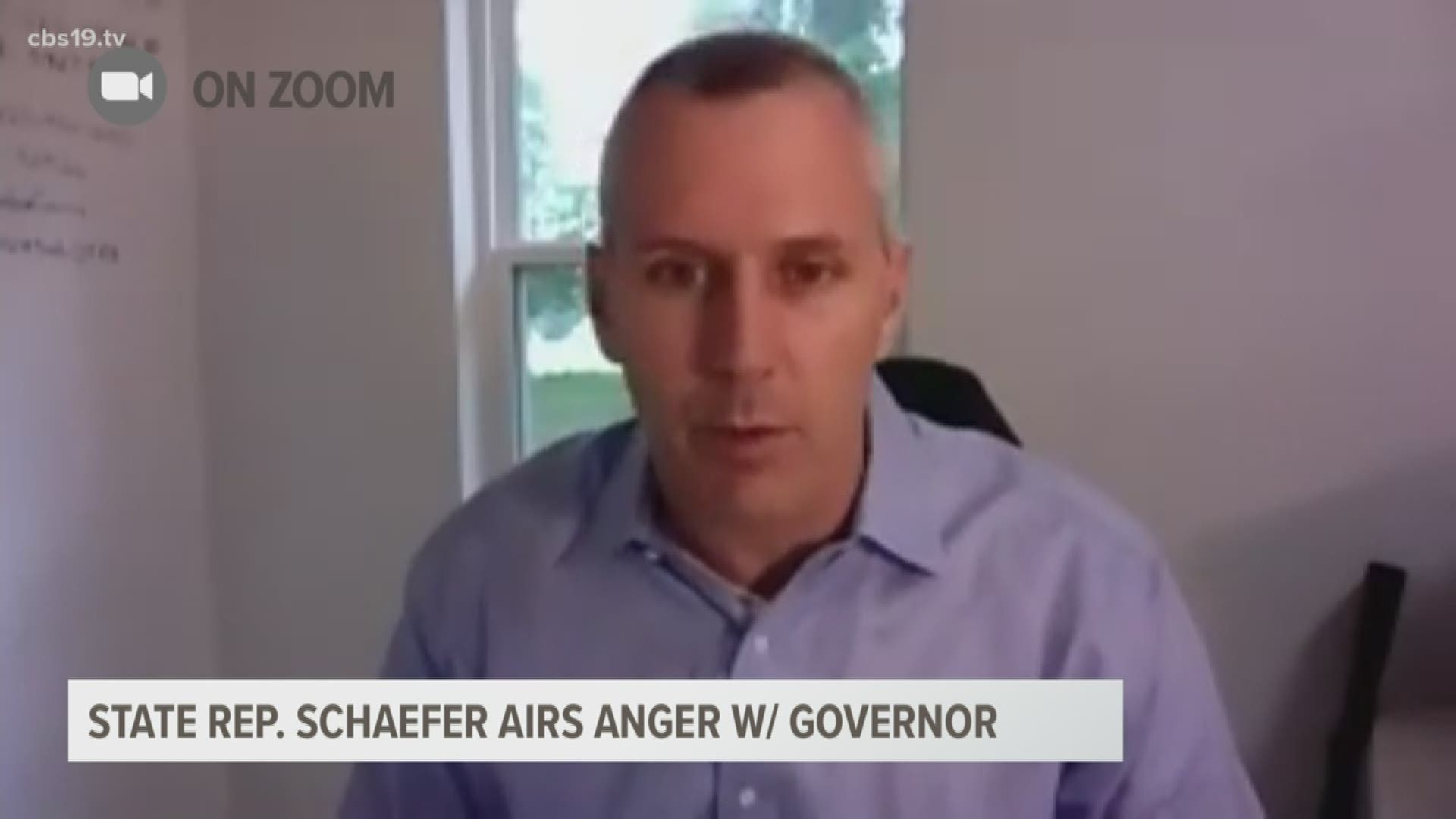 TYLER, Texas — As Governor Greg Abbott slows down the reopening of the state, there is dissension within the Republican Party about his decisions.

State Representative Matt Schaefer (R-Tyler) is a vocal critic, especially of the governor's decision to close all bars. He posted multiple times to social media over the weekend about his dismay that Gov. Abbott ordered all bars statewide to close indefinitely Friday.

"The question really should be: Can government prohibit people from getting together? Can government prohibit people from socializing?" Rep. Schaefer asked. "I think the answer is no. I think the role of government here should be to give guidance, provide support, provide resources, and then let Texas business owners make the decision and let individual Texans make the decisions for themselves and their families as to which businesses they're gonna go into."

Gov. Abbott acknowledged the risks posed by bars on May 5, when he explained during a news conference why he had yet to authorize bars to reopen. "We also need to recognize kind of the very nature of a bar," he said. "And that is: It brings people close together in a closed space, in a setting that really is the type of setting that promotes the transmission of infectious diseases."

Schaefer said COVID-19 is something everyone should pay attention to, and Texans should heed the advice of medical professionals. He also said lockdowns related to coronavirus have led to depression, anxiety and suicides, so closing bars indefinitely could cause more harm than good.

"This means that they're facing bankruptcy," Rep. Schaefer explained. "And it's not just them. Think of the vendors that support them, whether someone's supplying paper goods for them, or food to that bar, or servicing the plumbing or the A/C."

Schaefer is part of the House Freedom Caucus, a group of conservative legislators that advocate for individual liberties. The group has stated its displeasure with Abbott for not reopening the economy faster and wider than he has.

Monday, Schaefer said part of his frustration with the governor is that he has made all his decisions via executive order and without enough input or clarity.

"The governor has just, like that [snap], you're done, and with no guidance as to when they can open up again," Rep. Schaefer stated. "I think that's wrong. I think every business--no matter what you have—if you're a legal business, you should have the opportunity to serve your customers, do so in a responsible manner, and let those customers make the decision about whether they're gonna come in there or not."

Schaefer argued that people in East Texas should not be as concerned about coronavirus because our hospitals have plenty of capacity to help people who develop serious symptoms. He said people should maintain distance from each other when possible and wear face coverings when it's not possible.

"I don't believe that closing businesses is what's gonna help us recover," Rep. Schaefer added. "I think, providing guidance, resources, and support to our businesses and our hospitals is going to be the way forward."

Schaefer said he does not believe the state should mandate that people wear masks, saying that decision should be left to each individual. While some compare the need for a mask requirement to laws regarding seat belt use or smoking in public buildings, Schaefer said there is a key distinction: the process by which those laws were enacted.

"The no smoking ordinances were passed after public comment, after a vote by the elected city council," Rep. Schaefer explained. "The seat belt laws were passed b the Legislature, by the lawmakers, after public debate, after committee hearings, after a vote in front of everybody. Gov. Abbott is acting by himself, without input from the Legislature. And so, if Gov. Abbott wants to take someone's business away from them and give them no compensation for taking that business away, then he should call us into session and ask for the legal authority to do that."

While bars may not allow customers inside, Gov. Abbott did allow them to sell food and drinks to go, whether by pickup or delivery. "That's not gonna keep them out of bankruptcy," Schaefer argued. "That's not the way they've set up their business. People go into bars to, maybe, have a meeting, maybe hear some live music, to do different things like that, and that's their choice to do that."

Schaefer mentioned Monday that, even though thousands of people die in car crashes in the state every year, drivers continue to get behind the wheel. He said they have calculated the risk of their activity and deemed it acceptable, and COVID-19 should be treated the same way.

"I believe we should take COVID-19 very seriously," Rep. Schaefer said. "I do, in my family, and I encourage my friends to do the same. But I'm not gonna just go crawl into a cave and quit living my life."

Arizona Gov. Doug Ducey ordered all bars in that state to close Monday, along with gyms, water parks, and movie theaters. He ordered them closed for one month.