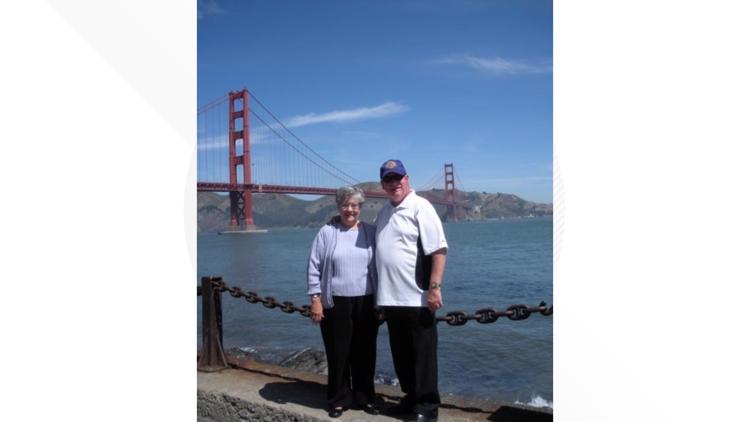 'One of the really great guys': Widow mourns Arlington man who had COVID-19

ARLINGTON, Texas — There are no words to adequately describe how difficult losing her husband has been for Jean James.

Her pain is unimaginable.

Not being able to be with him when he died early Monday was unbearable.

Her husband, Pat James, was under quarantine at the time of his death at Arlington Memorial Hospital. Doctors suspected he had COVID-19.

Jean James remains in quarantine at the couple’s duplex at the Texas Masonic Retirement Center.

“I get real sad and I have to just kind of shut that off for now,” she said. “I’ll have my time later down the road.”

Pat James died two days after he was tested for COVID-19. Test results confirmed Tuesday that he had the deadly illness.

He was a retired insurance salesman, a church-going person and “hard worker in life,” his widow said.

Jean James and her husband attended the same high school in Wisconsin. They reconnected years later and married in 2000.

Pat James was taken to the hospital on March 10. That was the last time Jean James saw her husband.

Now the other residents of their retirement center are also under quarantine. Meals are being brought to them.

Texas Gov. Greg Abbott has said that all of the residents, as well as anyone else who came in contact with Pat James, will be tested.

“I’ve been tested and I’m improving and hoping to have the clearance soon,” Jean James said. “I want people to know I feel better. I know I’m on the mend.”

Before being hospitalized, Pat James had been sick for weeks.

Jean James was placed in quarantine after her husband fell ill and later died.
Courtesy the James family

Around March 7, the illness worsened for both of them. They both lost their appetite. They were tired and experiencing shortness of breath.

“Pat felt worse than I did,” she said.

He was taken to the hospital days later.

Doctors diagnosed him with double pneumonia, put him on a ventilator and sedated him. Doctors placed him in quarantine March 13, once they began to suspect he had COVID-19.

Jean James taught school for 42 years, including 38 years in the Eagle Mountain-Saginaw school district. She taught in the gifted and talented program for 20 years. She retired five years ago.

Her husband was a Shriner and a lifelong Boy Scout. For the past three years, he mentored a child at an elementary school.

“He was one of the really great guys," Jean said with a chuckle, “And he would tell you that.”

Jean James said she will miss her husband's hugs, his laughter and his quick-witted sense of humor. He was known for wearing funny T-shirts.

“He was a gentle, caring person,” she says. “He had a marvelous sense of humor and that’s what everybody who reaches out to me says.”

She said she wanted to thank the Neptune Society, a cremation company that moved took his body from the hospital after his death.

“They’ve been the kindest people through all of his helping me with what had to be done with Pat’s body,” she said.

She became emotional as she described how they draped him with a flag in honor of his military service. She said her husband served in the Army National Guard as a medic.

Jean James said she knows that former students have been concerned about her. But just like the teacher she once was, she had a message:

“I hope they’re working on their schoolwork while they’re home,” Jean said. “Mostly, they need to read.”

Pat James had a son and a daughter.