'Ghost surgery': Is the doctor you chose the one holding the scalpel? Maybe not

A patient said she was left 'mutilated' during her breast surgery. Was it because of resident trainees? 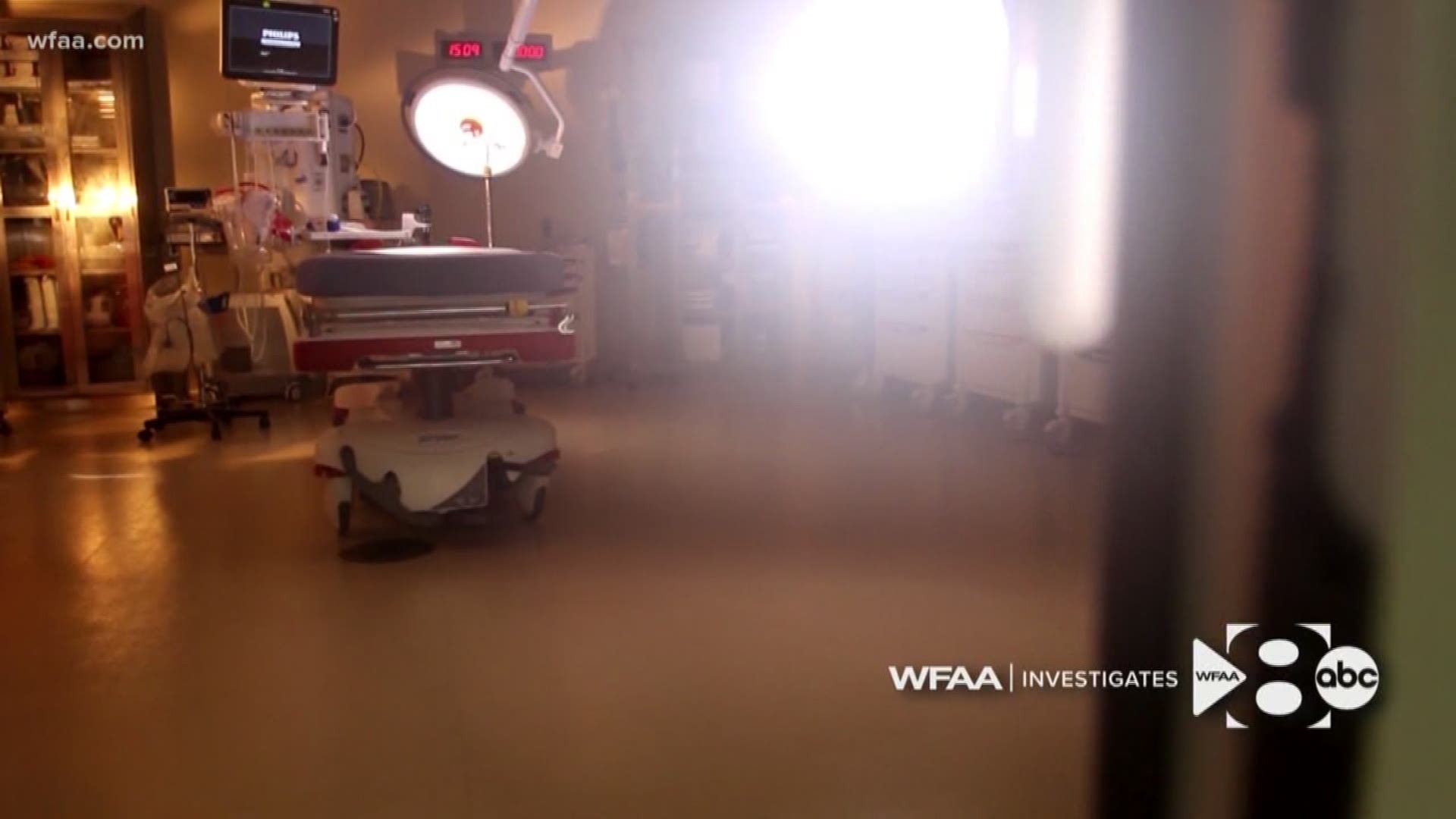 DALLAS — The above video is one of two videos associated with this story. To watch the second video click below: 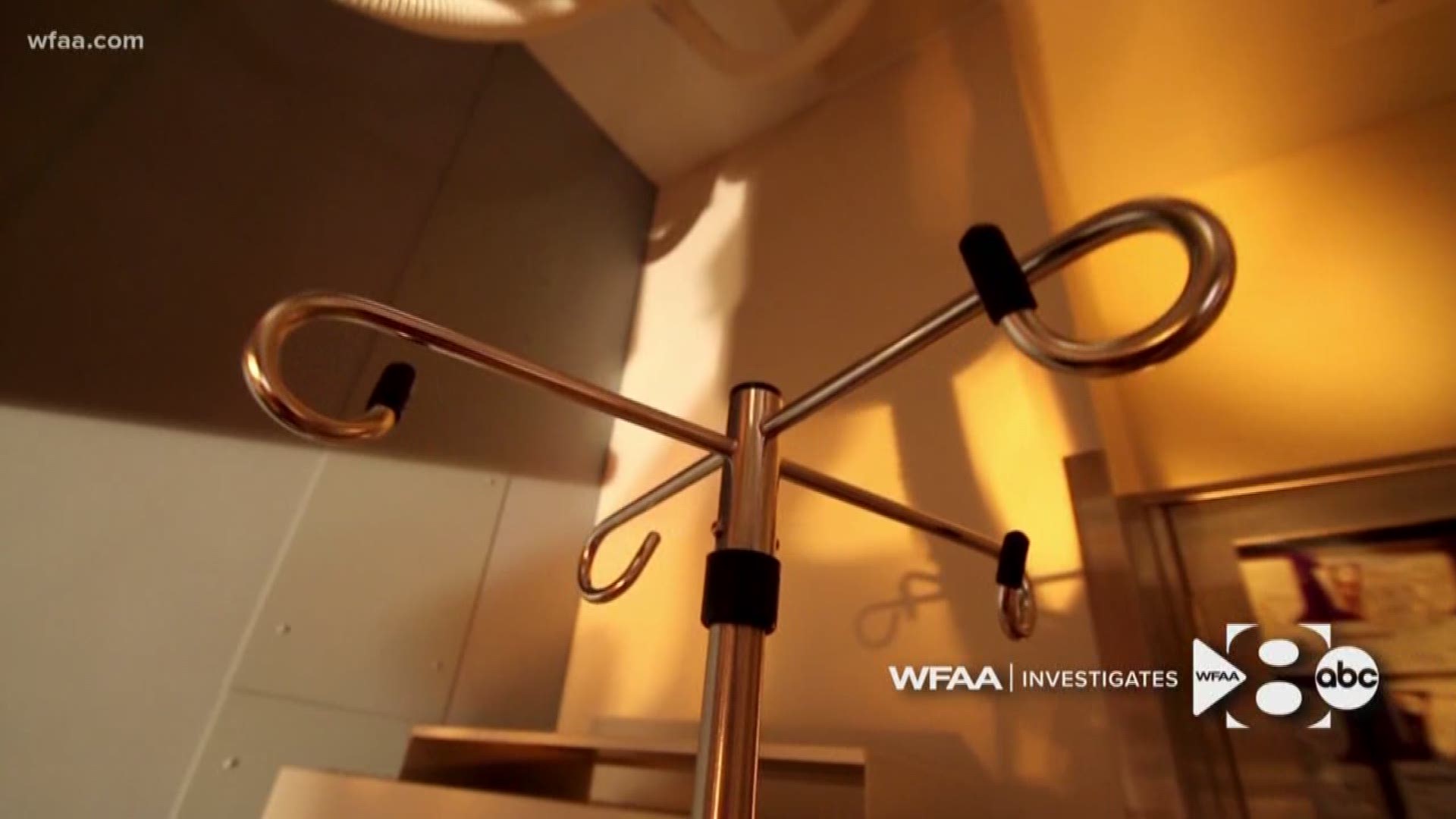 Patients who've gone through the effort to carefully select a surgeon likely believe that will be the person holding the scalpel during the operation. But that's not always the case.

“Ghost surgery is when the surgeon cutting into you is not actually the person you thought was going to be doing the surgery,” said Dr. Michael Greger, a physician and professional speaker on public health issues.

Greger said ghost surgery is all too common in hospitals affiliated with medical schools.

Often, the only way patients find out is when something goes wrong, Greger told WFAA.

Kathryn Weber said that’s what happened to her.

Earlier this year, Weber chose to have a breast reduction after she learned she had the BRCA2 gene, which puts her at high risk for breast cancer.

“I have great insurance,” she said. “I could go anywhere.”

“I feel like I did everything right in researching and vetting [my] doctor, and yet this is how it all turned out for me,” she said.

The surgery didn't go as expected. One breast is fine, but Weber described her other breast as “mutilated.”

The complications from her surgery resulted in numerous hospital visits, follow-up procedures, infections and months on a wound vac.

Weber said when she returned to the hospital, the anesthesiologist from her surgery recognized her and asked why she was back.

"I lifted up my gown and I showed her," she said.

“[The anesthesiologist] said, ‘I know why this happened. You know this is a teaching hospital. The doctor did one side and the residents did the other... but please don’t tell,'" Weber said.

WFAA’s calls to Weber’s anesthesiologist were not returned.

Her medical records said the board-certified plastic surgeon she selected “supervised” the operation. Two residents-in-training were listed as "assistant surgeons."

Weber told WFAA she feels like a guinea pig. And, as WFAA reported in a prior story, she has little recourse against a public facility like UT Southwestern and its faculty due to governmental immunity laws.

RELATED: 'You will get nothing. You have to walk away': Governmental immunity blocks Texans from protection

“I mean, they basically gave my body to their medical residents to experiment on,” Weber said.

Residents-in-training can legally perform surgery but only if two conditions are met: The surgeon supervises the surgery and the patient gives the hospital “informed consent,” which includes written permission allowing residents to participate.

Texas law doesn’t define “supervision.” But in order to qualify for reimbursement by Medicare and Medicaid, the federal government takes it one step further. Federal rules require a surgeon to be “physically present” during the “supervision.”

In letters to Weber, UT Southwestern officials told her that her doctor often uses residents to assist. But they said the surgeon was present in the operating room.

However, her initials are missing from the second page, which contains a critical sentence that notifies patients that "residents… may perform portions of the surgical procedure."

Weber told WFAA she never initialed the second page because she never saw it.

“I never initialed page two,” she said. “There was no way to sign it. And I never got a chance to read it. I could only see it on the clipboard.”

Weber said the resident told her she was signing a surgery consent form for her doctor.

“That was the only time I saw the consent form,” she said. “The resident kept the form on a clipboard and held on to it. He told me, 'Initial here and here,' and I made marks where he said to initial.”

“Why wasn't I given these forms when I was given.. this nice glossy packet selling me on why I should go with [this doctor]?” Weber said.

Not an isolated incident

“That's just so typical,” Greger said. “The reason they do it that way is to railroad you in. They know you're not going to be reading anything… And, of course, you're in no mental state to be going through it. You're being rushed through the process.”

WFAA contacted several doctors and organizations. They all said “informed consent” is not just a signed document. Instead,  they said, it should be a conversation between the surgeon and patient, ideally had several days prior to surgery.

“It’s verbal communication. It should be clear to the patient who is doing the procedure and who is [going to be] present,” said Dr. Janis Orlowski, the chief health care officer for the Association of American Medical Colleges.

According to the American College of Surgeons' policy, informed consent is a "discussion conducted by the surgeon" about "the different types of qualified medical providers who will participate in [the patient's] operation and their respective roles."

But Weber said her doctor never had a verbal conversation notifying her that medical residents might be involved in her surgery.

“Absolutely not," she said. "I would have never tolerated that."

Weber filed a complaint with the Texas State Medical Board, which determined her doctor’s treatment was “consistent with established practices,” and pointed to the fact that Weber signed the informed consent form.

UT Southwestern declined WFAA’s requests for an on-camera interview. Instead, a spokesperson for the medical school sent a statement.

It said, in part:

“Academic medical centers and teaching hospitals educate the next generation of physicians and at UT Southwestern, that is no different... [The surgeon] determines the level of involvement of residents… The safety of patients remains paramount at all times."

“I had seen my surgeon once at his office, where he saw me the first time,” she said. “He never mentioned using residents, and it never crossed my mind he would have residents do my surgery.”

“It is totally designed to scam you,” Weber said. “I consider myself an intelligent person but they really got me on this.”

The issue spans beyond UT Southwestern to its teaching hospital, Parkland Hospital.

Hospital records obtained by a Dallas law firm in a 2007 "whistleblower" complaint shows from 2007 to 2008, there were 161 surgeries at Parkland where the surgeons left the residents to operate without supervision.

Examples from the records include:

But many patients would never know it because they’re out cold.

'Not ethical at all'

“I didn't believe what I was seeing,” he said.

In 2007, Gentilello was a head surgeon and the distinguished chair of UT Southwestern’s Burn, Trauma and Critical Care Division of Surgery. He often performed surgeries at Parkland, the medical school’s teaching hospital.

Genilello had been a world-renowned trauma surgeon and academic at Harvard Medical School. But he told WFAA that his experience at UT Southwestern ran contrary to his prior training.

“I remember being told early on in my first few days, ‘Larry, you've done enough operations, just stay out of the operating room and let the residents do it. They've got to learn,’” he recalled.

Gentilello said he’s even aware of times when the surgeon who was listed as the one performing the surgery wasn’t even in the country, let alone the operating room.

“For example, I had a faculty member whose parent died in England and he was over there for a month disposing of her house and her goods,” he said. “And for a month, his name was on the consent form for dozens of operations when he wasn't even in the Western Hemisphere.”

“At Parkland, the patients were described as clinical fodder, resident learning material,” he said. “They were not described as patients who are entrusting their lives to your care.”

“I had a sort of a final straw moment,” he said. “I saw that I was on the board to do a gallbladder operation on a woman who I'd never seen, didn't know anything about her… And so, I quickly checked and went back and there was a third-year resident operating on this woman. And it was a blood bath. I just had enough. I said, ‘I'm going to put a stop to this. It's my division.’”

But when Gentilello voiced his concerns, he was demoted, he told WFAA.

He filed a "whistleblower" complaint that alleged UT Southwestern had retaliated against him for reporting billing fraud. His suit, ultimately, was thrown out on legal grounds before ever going to trial.

However, the Justice Department gained a $1.4 million settlement from Parkland over allegations of false billings to Medicare and Medicaid. The suit included concerns – mirrored by Gentilello – that there had been inappropriate supervision of residents. Parkland settled the complaint but did not admit any wrongdoing.

In 2013, the feds announced Parkland had made the required improvements to patient safety.

Gentilello said he feels he helped trigger the investigations and ultimate improvements.

“There must be a voice to communicate with the patient explaining the procedures and the risks,” he said. “The patient must acknowledge that they understood those risks in what they were going to undergo… very importantly who was going to do their surgery. You can't have one surgeon's name on the consent form and have another surgeon sneak in and do it without the patient knowing.”

Parkland Hospital denied WFAA’s requests for an on-camera interview about the changes they've made.

Instead, April Foran, a spokeswoman for the hospital, sent WFAA an email stating, "Residents cannot do surgery without supervision of an attending physician."

But for patients like Weber, that answer isn’t good enough.

“It's just shameful," she said. "... And we deserve better than this… I know I'm not the only one that this has happened to and I know I won't be the last."