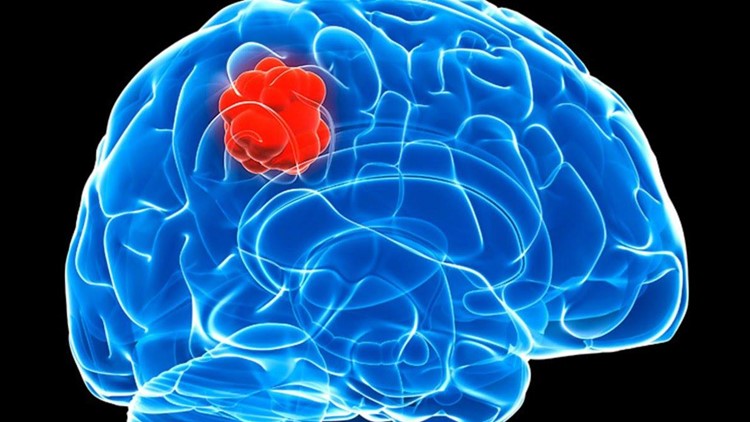 Photo by: mdanderson.org
Glioblastoma is the deadliest form or brain cancer.

Medicine for dogs studied as possible cancer treatment for people

Researchers are studying a dewormer for dogs and a pinworm medicine for people as possible treatments for glioblastoma and other forms of cancer.
Author: Michelle Homer
Published: 4:14 PM CDT May 15, 2019
Updated: 5:00 PM CDT May 15, 2019

It was the 2016 diagnosis Joe Tippens said he wasn’t willing to accept. The Edmond, Oklahoma man was determined to live at least long enough to meet his first grandson, due in a few months.

Tippens immediately contacted MD Anderson and was on a flight to Houston that night.

He said chemo and radiation at MDA shrunk the large tumor in his lung. But after he finished treatment, a PET scan revealed it was too late.

“The cancer had spread to my neck, my Right Lung, my stomach, my liver, my bladder, my pancreas and my tail bone. Dozens of tumors,” Tippens wrote in his blog.

Two days after the PET scan, Tippens said a veterinarian friend told him about a dog dewormer called fenbendazole that some people believe cured their cancer. It’s branded as Panacur C and can be ordered online.

Tippens did some research and learned the drug is considered safe for humans, with no serious side effects.

“I had just been told I've got no hope and 3 months to live, so it wasn't a hard decision for me to take the leap,” Tippens wrote.

He said he took fenbendazole, along with a vitamin and supplement regimen, while also taking part in an unrelated trial at MD Anderson. Doctors said the trial wouldn't save his life, but it might extend it.

Tippens didn’t tell his oncologist about the fenbendazole because he was afraid they would kick him out of the trial.

When Tippens returned to MDA for another PET scan in May of 2017, he said the results left his doctors stunned.

“My oncologist was literally stupefied. My PET scan was ‘all clear,’” Tippens said. There were no signs of tumors anywhere in his body.

It sounds a little crazy and too good to be true, but researchers at MD Anderson, Johns Hopkins, the National Institutes of Health and other prestigious medical centers around the world are conducting their own studies on fenbendazole and menbendazole, the human version.

Johns Hopkins began researching fenbendazole in 2014 after accidentally discovering it stopped glioblastoma tumors from growing on some mice in their laboratory.
Johns Hopkins

Johns Hopkins began researching fenbendazole in 2014 after accidentally discovering it stopped glioblastoma tumors from growing on some mice in their laboratory. The only thing that set those mice apart from the others in the lab, was the fenbendazole they were given for pinworms.

"Most things we try don't work," Dr. Gregory J. Riggins, a Hopkins professor of neurology and oncology, told the Baltimore Sun. "And then we find something completely by accident."

Riggins said they’re now seeing promising results with menbendazole, the human form of fenbendazole, in people with glioblastoma, which is the deadliest form of brain cancer. It’s the same cancer that killed Senators John McCain and Ted Kennedy.

Riggins is far from ready to call the parasite treatments a cure, but he’s encouraged by the results so far.

"Being a cancer researcher is a lot like being a professional gambler," he told The Sun. "You want to make the next bet even when you know you're going to lose. In this case, I'm glad we made the bet."

The long-term results remain to be seen.

As for Joe Tippens, he said he’s heard from dozens of people who believe fenbendazole saved their lives. Others have had little or no results.

Three years after receiving his death sentence, Tippens says he’s enjoying life with his family, including that little grandson he was so determined to meet.

Teacher battling cancer forced to pay for her own substitute

Number of unvaccinated Texas kids more than quadruples in a decade