Experts predict less than half of Black Americans would take the COVID-19 vaccine if it were available to them today. 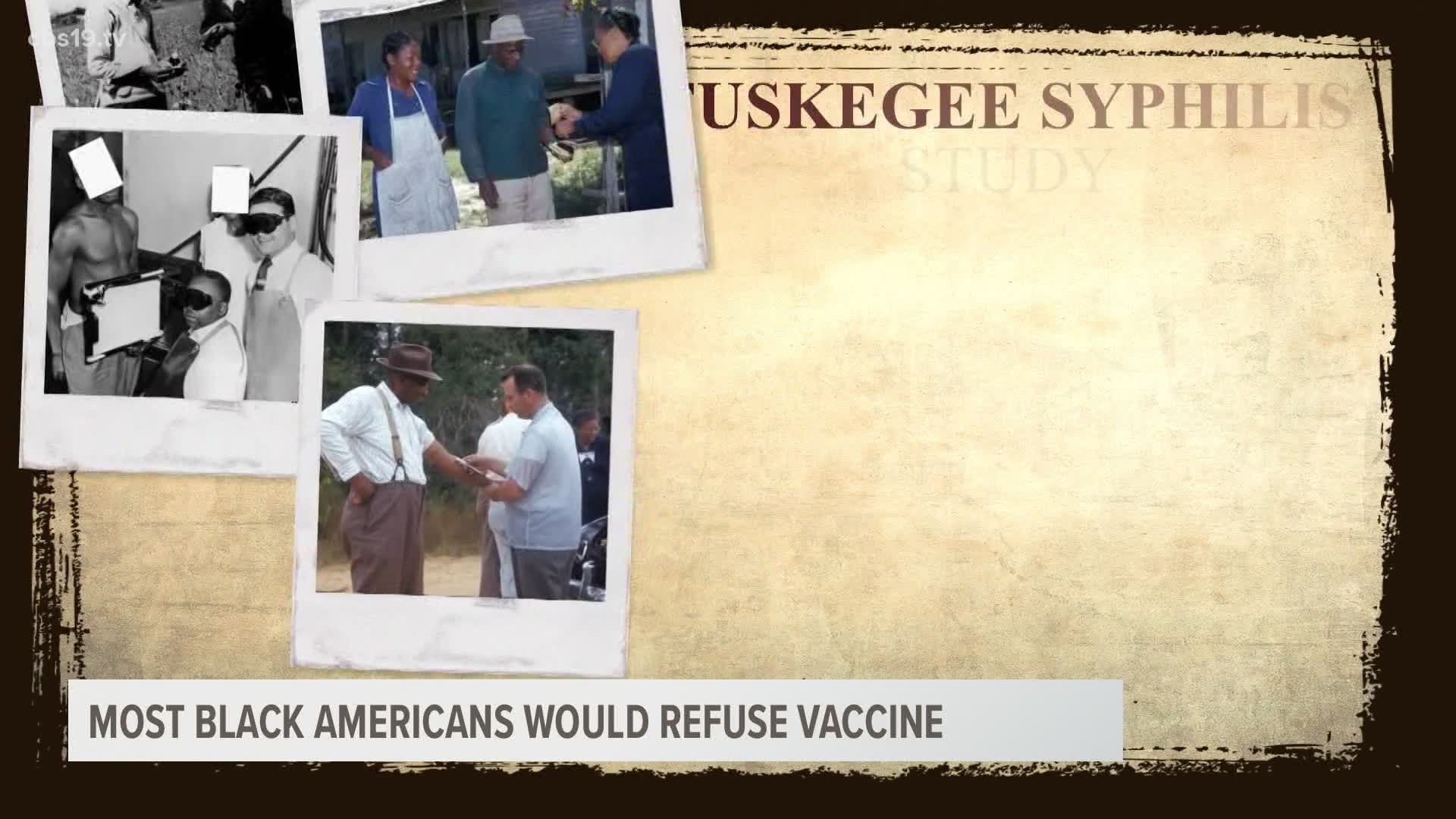 TYLER, Texas — As we approach month 11 of the coronavirus pandemic, Americans grieve the loss of more than 300,000 lives.

But for the first time, the end of the pandemic is in sight as vaccines for the virus continue to roll out this week. Experts say the vaccine likely won't be available to the general public until the spring, but some Americans will still refuse to get vaccinated.

Black Americans, in particular are, hesitant to receive the vaccine. This is largely due to what they call generations of distrust and racism within the medical industry.

"I remember as a young child, looking at photographs of men who had been subjected to that by the federal government,” Darryl Bowdre, pastor of South Central Church of Christ, said.

He's referencing The Tuskegee Study, one of the most infamous examples of medical racism. For 40 years, the United States Public Health Service, in partnership with the Tuskegee Institute in Alabama, used hundreds of poor Black men and women as test subjects for the syphilis disease.

"Those are images that just never leave, well for me personally, they’ve never left my mind,” he said.

Bowdre echoes the concerns that millions of Black Americans have. This could explain why recent data from Pew Research Center shows that only 42% of Black Americans would get the vaccine if it were available to them today. This is significantly less than the White (61%), Hispanic (63%) and Asian (83%).

Nurses like Lisa Williams want the community to pay attention to the facts.

“Look at the numbers, look how many people are dying,” she said.

The Center for Disease Control (CDC) reports that more than 300,000 people have died so far in the United States and Black Americans are almost three times as likely to die from the virus than White Americans are.

“The virus, unfortunately, doesn’t care about the trust,” Lisa said.

That trust may be necessary in order for more Black Americans to take the vaccine.

"With this country’s reputation for medical racism, they’ve got to turn over stones, they’ve got to jump through hoops to make people feel comfortable about taking the vaccine," Bowdre said.

Health professionals are prepared to turn those stones and jump through those hoops until every member of their community is protected. As of now, it’s unclear when the vaccine will become available to the general public.

What should you expect after getting a COVID-19 vaccine? The CDC says you may have some side effects, which are normal signs your body is building protection. https://t.co/DYCM5m1q5z

RELATED: Doctors of color encourage COVID-19 vaccine and are confident in its safety