Jacksonville parents concerned over bullying, among other alleged issues with district

Parents in Jacksonville continue to express concern over their children's safety after an aggravated assault, but district officials are holding their ground saying everything is under control. 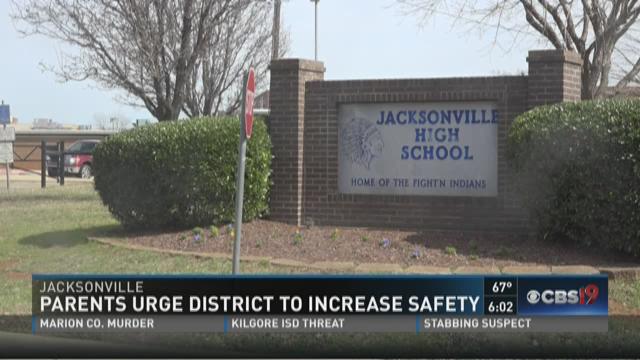 Parents in Jacksonville continue to express concern over their children's safety after an aggravated assault, but district officials are holding their ground saying everything is under control.

"I'm ashamed to have graduated from that school,” said Tonya Taylor.

She is the mother of 19-year-old Ethan Taylor. He was arrested on Tuesday and charged with aggravated assault with a deadly weapon, according to a police report from Jacksonville ISD.

The report states he got into a verbal fight and pulled a knife on a student in the parking lot near the high school's cafeteria. His mother said she would never let her son carry a knife, and says this incident is the result of a much bigger problem – bullying.

"I've had meetings before with all his teachers and I've expressed my feelings on how I feel about the bullying. It doesn't do any good," Taylor said.

Spokesperson Grace Traylor said the district only has one formal complaint for the 2016-2017 school year. She suggested going straight to an administrator, instead of complaining to a teacher.

"This isn't a jail,” Avera said. “We don't have metal detectors, and we don't search students when they come to school in the morning unless we have reasonable suspicion or probable cause."

An email from Yusuf A. reads, "typical bullying situation that happens here in Jacksonville. My daughters are in the same situation."

In addition to that, a Facebook of more than 200 parents are expressing safety concerns, including bullying, and other alleged problems in the district.

CBS19 Investigates will continue looking into allegation. If you have any concerns with Jacksonville ISD, send an email to news@cbs19.tv.