The battle between parents and the Jacksonville school board continues after a student was arrested and charged with aggravated assault with a deadly weapon. 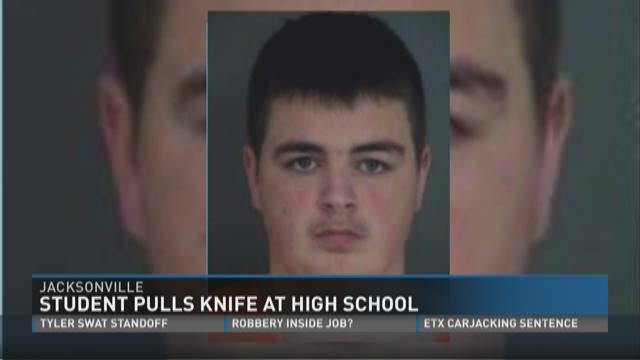 The battle between parents and the Jacksonville school board continues after a student was arrested and charged with aggravated assault with a deadly weapon.

Earlier this week, CBS19 shared the concerns of parents alleging students at Jacksonville High School were bringing knives to school - despite denial from the district.

According to an incident report, a student was arrested yesterday for aggravated assault with a deadly weapon - a pocket knife. The report states Ethan Taylor, 19, got into a verbal fight with another student. He then pulled a knife on the student in the parking lot near the high school’s cafeteria.

No one was hurt.

"This causes a lot of concern,” said Albert Valenzuela, a parent of several students in JISD. My wife came to me as soon as I told her about it and said we need to start looking at pulling our kids out of this district."

Taylor was arrested and taken to the Cherokee County Jail where he posted bond earlier today.

JISD Chief of Police Bill Avera said this is the first time a student has been arrested for aggravated assault since he took the position in August.

When CBS19 asked if Avera would do anything about parents’ concerns, he said, “If we find out about it and know about it, then yes we will."

A group of more than 60 parents on Facebook said they've expressed safety concerns for some time now - claiming district officials are doing little to curb the problem.

"I have no ulterior motive,” Valenzuela said. “My only motive is to provide a safer, quality-of-education environment for my children to go to school in. The end."

Parents in Jacksonville, if you have similar concerns or experiences, share your story with us by sending an email to news@cbs19.tv.