Runners in East Texas may want to double check their April race dates. The Texas Wine Series at Kiepersol Wine Farm in Tyler is canceled, and has been for months. Allegedly, no one was ever told about the cancelation. 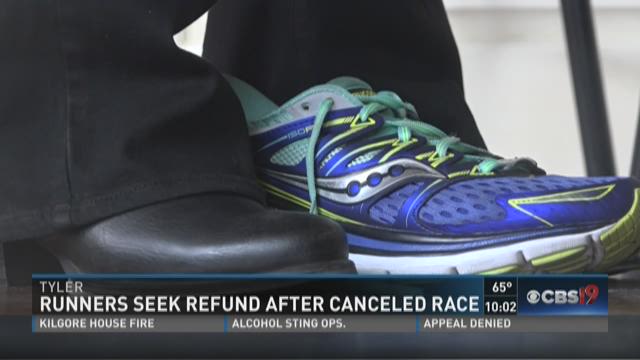 Runners in East Texas may want to double check their April race dates. The Texas Wine Series at Kiepersol Wine Farm in Tyler is canceled, and has been for months. Allegedly, no one was ever told about the cancelation.

CBS19 received several emails from eager runners confused and upset they were never refunded their registration fee of $90 for.

Savitha Shastry heard the race would be canceled in November after a personal inquiry.

Four months later, she still hasn't received a refund. She said it's not the money they're mad about, it's the memory they'll never share.

"I can't stand running," she said.

While Shastry admits running isn't her favorite way to burn calories, she's on a mission.

"It's my friend that has gotten me into it. It's something I wanted to do to conquer my fear of running," she said.

After running a 5, 10 and 15k with her best friend, set out to run this race for a particular milestone - her fortieth birthday.

Excited for their first half, her friend reached out to Kiepersol regarding a personal inquiry.

That's when she received an email saying the race was canceled - stating a partner in the event would allegedly not follow through with donation promises.

The company, Carrera Races, out of San Antonio processes all fees for the event.

A spokesperson from the company told CBS19 emails were sent out instructing racers how to get a refund, but Shastry said she never received any notification.

On the company's website, the race is still up for registration, even though it was canceled months ago.

While Kiepersol was never involved in any transactions involving the race, owner Marnelle Durrett told CBS19 she's going to personally make sure these runners are taken care of.

"They've even volunteered to refund the money themselves," Shastry said, applauding Kiepersol for helping.

While these two may not be trading out their boots for sneakers on the date they'd hoped, they say they've already started planning for another race.

After CBS19 got involved, a spokesperson from Carrera Races said runners will be issued a refund early next week.