The TMPA recently conducted a survey on the Tyler Police Department to which nearly 90% of the department's 182 officers responded. 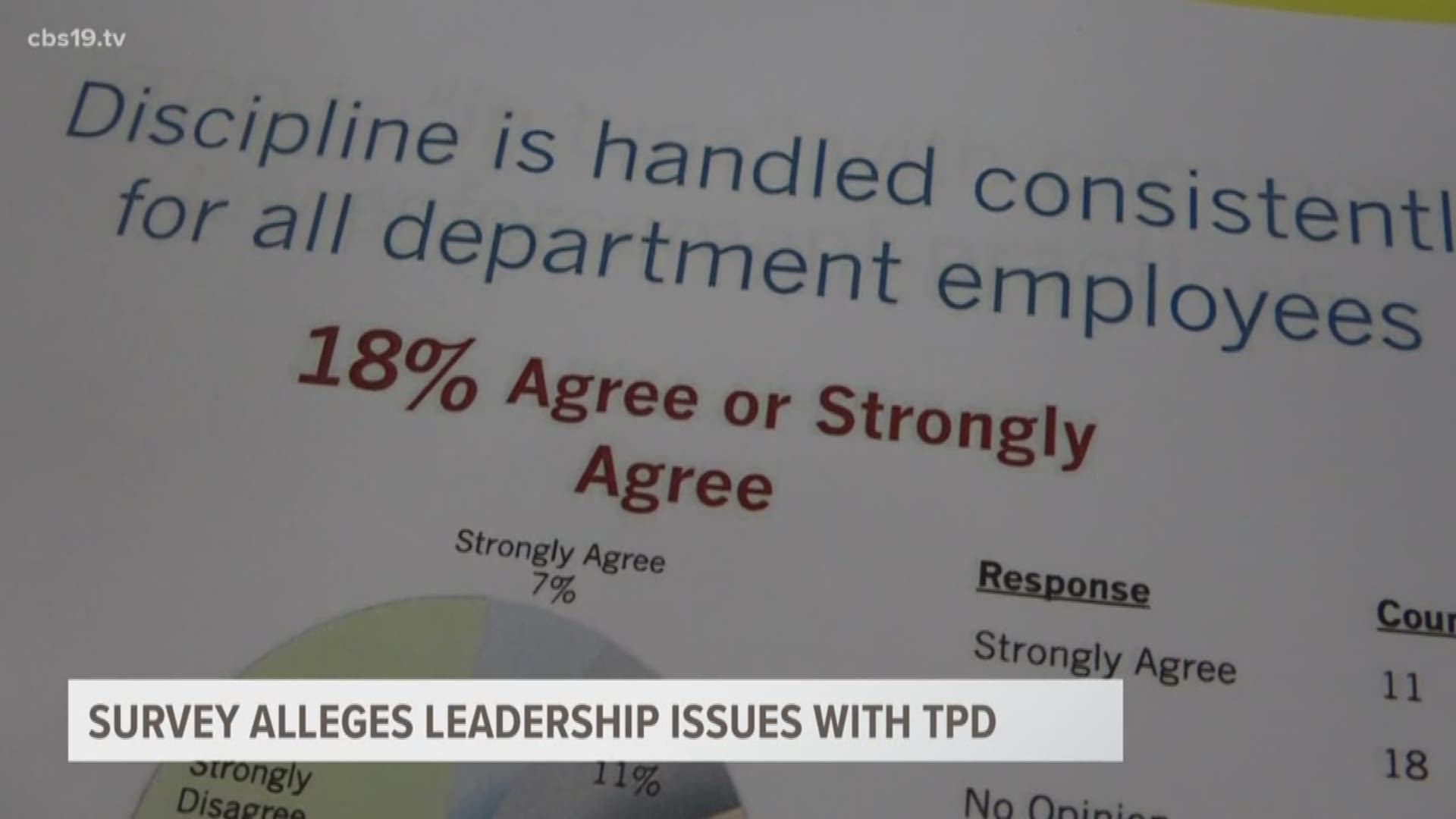 Members of the Texas Municipal Police Association (TPA), a group representing public safety officers in Texas, signed up to speak at the city council meeting during the city manager's report.

However, the council removed the report from the agenda, an action rarely taken during council meetings.

"I noticed that the city here controls the narrative by not allowing public comments unless it is on a agenda item," said Clint McNear, a field representative for the TMPA. "We signed up to speak on the city manager's report, which was an agenda item. And the meeting was adjourned without addressing any of the cards filled out for the city manager's [report]." 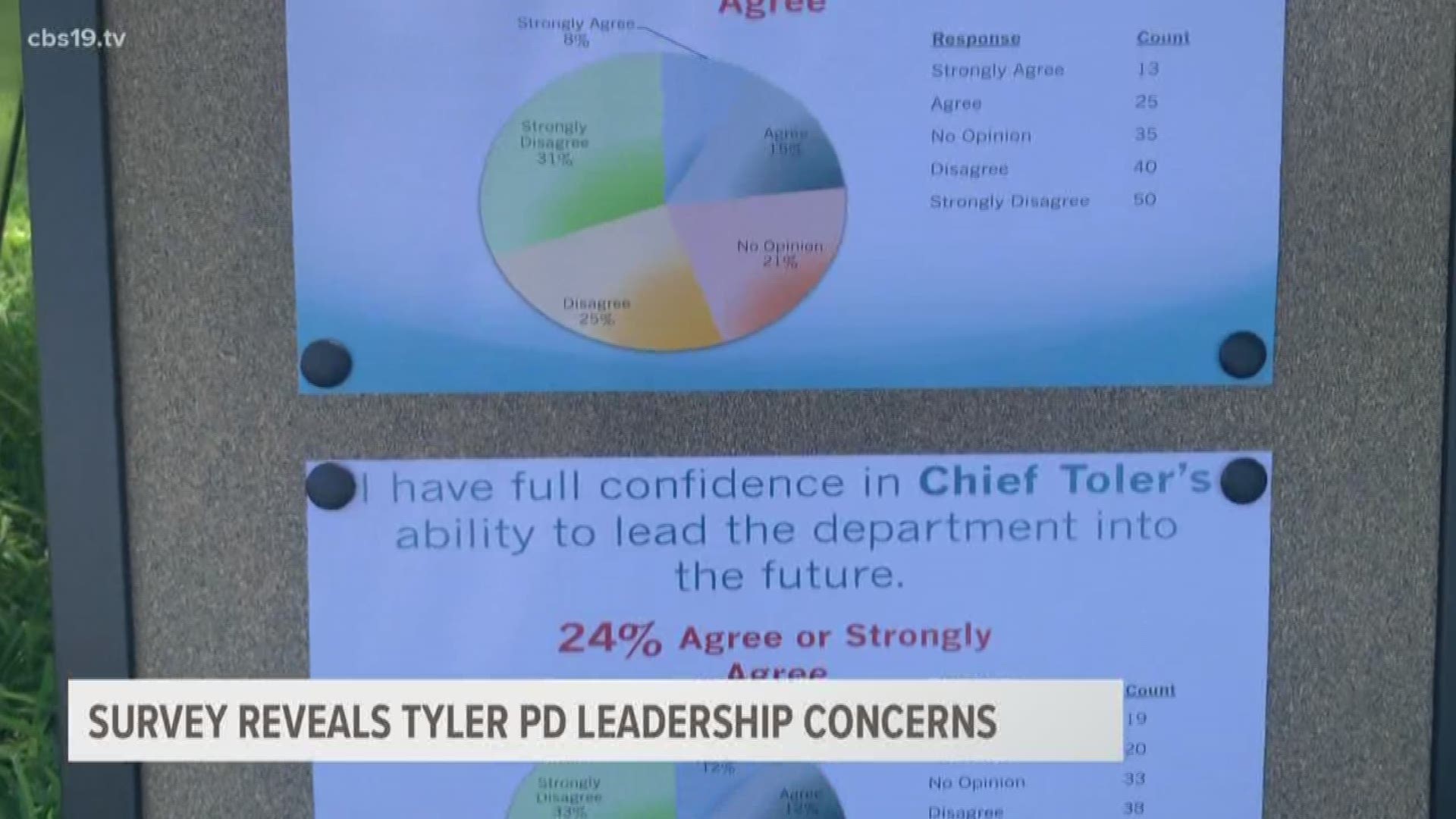 Outside the chambers, TMPA members expressed frustration to Tyler Mayor Martin Heines and another city employee for not giving them the platform to speak publicly.

According to McNear, the TMPA recently conducted a survey on the TPD to which nearly 90% of the department's 182 officers responded.

"For the last two months or so, I had been speaking with TMPA members, individually, that have called me and I've even had one over at my house presenting the results to me fairly recently," Mayor Heines said.

"Over the last few months, we had a disagreement with the association," Tyler Police Chief Jimmy Toler said. "This brought in the state association. Part of that resulted in a management survey that you are given today."

Chief Toler began his career with the TPD in 1993.

According to the TMPA's survey, most officers say they enjoy their job and think their hours are reasonable. However, a majority also claimed the department is understaffed.

"There's some positives in there," McNear said. "Eighty-something percent of the department likes their current shift. They like their current assignment. There are some high points in here. But the trend, the theme in there, you'll see as you go through it starts at the top. It's a leadership problem."

According to the survey, when it comes to the police department:

According to the survey, in regards to Chief Toler:

"[Asst.] Chief Long [has] done an amazing job," Chief Toler said. "That's a positive aspect of what we've got going on."

The survey also showed some officers were concerned with department morale:

McNear claims he has also read exit interviews with former officers who also have a low opinion of leadership at the department.

"I've got five or six exit interviews dating back to about a year ago today, throughout this past year of people," claimed McNear. "When asked, 'Would you recommend someone coming to work for Tyler? No. Why?' Administration of the police department, morals of the administration of the police department, you need to figure out how to treat people at lower levels, like employees. So, it's not a new phenomenon."

Following the survey's release, Chief Toler spoke with CBS19 about the result.

"There are amazing things that have been accomplished at the Tyler Police Department in the last three years," Chief Toler said. "I think the issue has been brought up today, we focus on some negative stuff every now and then, and we often lose sight of the positive."

Despite believing the department is moving in a positive direction, Chief Toler acknowledges sentiments that were reflected in the survey.

According to Chief Toler, he was surprised to see the survey say the majority of participants feared retaliation for their participation.

"Those excitable words of those nice sound bites of people saying retaliation and stuff are factually incorrect," Chief Toler said. "There are multiple avenues for somebody to report something like that. There's complaints they can file internal. There's the open door policy that there was something else going on with a different supervisor, they come to me. [There's] a grievance process. There's the HR process. There's legal. There's EOC. If they believe that these things were happening, those hadn't happened. We have had received zero of those complaints during this period of time."

While Chief Toler says he takes issue with some of the opinions in the survey, he is working to improve the department.

"Every page of that survey has an opportunity for improvement," Chief Toler said. "You know, there's not anything on there, that's 100%. We fully accept that there are concerns and that people will have frustrations. And, if we can, find ways to fix those."

So, what's next for the TPD?

After the survey was conducted, McNear says he met with city leaders to discuss the results.

"I've had one with the chief and all of his staff," McNear said. "There has been other meetings with the Association Board, and/or individual representatives from the board meeting with various leaders, the mayor, city council members independently. There was an internal affairs investigation that that outlines and its findings, that statements made by them were not true."

Mayor Heines and Chief Toler both say they hired a consultant to further examine complaints within the department.

"We're going to delve into that and make sure that we represent the community and we're listening to those individual police officers on whatever issues they have," Mayor Heines said. "It really has to be something that we work on methodically and have a process."

"The consultant coming in is going to help us walk through our next two to three year strategic plans," Chief Toler said. "It has to do with engaging everybody at my level, assistant chief, lieutenant, sergeant, down to every officer and every employee of this department."

While the consultant will help form plans to improve the department, Chief Toler says it will take time.

"Relationships are repaired over time," Chief Toler said. "And the only way you can change people's perspective or perceptions is for them to see the things we're talking about."

Don't forget to download the new CBS19 app on your Apple and Android devices. If you already have the app, an update may be necessary. We've got you covered!