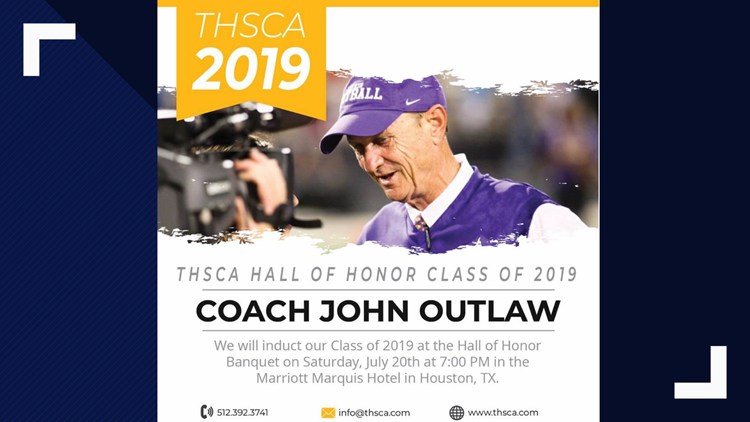 The late East Texas high school coaching legend John Outlaw has been revealed as one of the four inductees.

Outlaw is best known as the winningest coach in Lufkin High School history.

Before coming to Lufkin in 1995, he served as head coach at Sherman where he posted a 57-21-2 record from 1988-94. Prior to Sherman, he won two state championships at Arkadelphia.

His career ended with a record of 302-89-3 when he unexpectedly passed away, at the age of 58, when he suffered a heart attack following a morning run on December 23, 2011.

Others who will be inducted are as follows:

Honors will also be handed out to the following individuals:

The inductees will be honored at the THSCA Hall of Honor Banquet, sponsored by Balfour, on Saturday, July 20, 2019 at the Marriott Marquis Hotel in Houston at 7 p.m.

The banquet is held in conjunction with the annual THSCA Coaching School and Convention which will take place July 21-23.

Tickets to the luncheon are $55 and can be purchased by downloading the ticket form from the THSCA website and sending in the paperwork with payment.