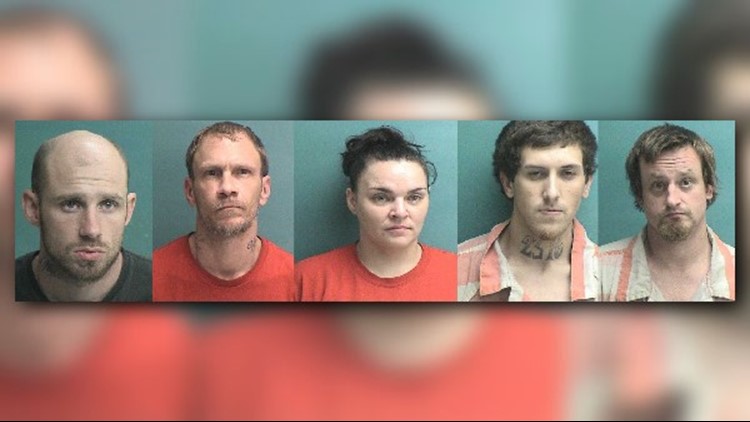 NACOGDOCHES COUNTY — Roy Butler ,28, Coty Whitehead, 37, Dustin Cooper, 24, Tia Meshell, 29 and James Edwards, 31,were arrested at around 6 a.m. Saturday after execution of a search warrant led to the discovery of several offenses on County Road 978 between Sacul and Cushing.

According to the Nacogdoches County Sheriff's Office, an investigation had been ongoing for several months, with the main target being Roy Allen Butler.

Investigators believed Butler had been distributing large amounts of methamphetamine.

During the deputies' investigation, information was obtained from the Trinity County Sheriff’s Office, who had gathered information that Butler may also be involved in fraud cases that had occurred in their county.

While deputies continued the investigation, they able to conduct several undercover purchases of methamphetamine from Butler.

Information was gathered that led to the discovery that Butler was making false checks, stealing people’s identity and also possibly making counterfeit money.

The morning of the five arrests, the Nacogdoches County Sheriff’s Office conducted a raid of the home on County Road 972.

NCSO said were seven adults inside the house along with some young children.

After securing the home, deputies conducted a search that led to the discovery of several grams of methamphetamine, several fraud documents and computer equipment that Butler was using to produce illegal documents on.

Investigators also spotted numerous sheets of paper hanging up to dry that were being used to make counterfeit money.

A small amount of counterfeit money that was in twenties and tens were also found hidden in the home, along with one fraudulent check printed out in the amount of $1,200.

Deputies also found fake social security cards, a computer from a local business believed to be stolen, several people’s names with personal information attached to it, like social security numbers and several counterfeit checks that had not been fully printed yet.

Also seized by deputies was one sawed off shotgun, methamphetamine, scales, and other material being used to package and distribute narcotics.

Whitehead was arrested at the scene for Possession of a controlled substance, and his bond was set at $5,000.

Cooper was arrested for Unlawful possession of a firearm by felon, and his bond was set at $15,000.

Meshell was arrested for an outstanding warrant for Motion to revoke Probation- original charge of Burglary of a Habitation out of Shelby County.

Edwards 31 years of age was arrested on a Class C theft warrant out of Nacogdoches.

All five suspects were booked into the Nacogdoches County Jail.

Sheriff Bridges said that more charges are likely against the main target in this investigation, Butler.

Authorities believe that "the hard drives on the computer will have a wealth of information on how deep Roy Butler was involved in stealing people’s identity and producing fraudulent checks and money."

Deputies have had several reports in the past of local businesses having fraudulent checks written along with several people having their identities stolen.

From the evidence that has been recovered so far, this may possibly be one of the largest fraud cases that we have seen in many years in our county.

The ongoing investigation has also concluded that Butler has been distributing several ounces a week of methamphetamine in our county.

Child Protective Services was also notified of the case, and that the conditions of the house were horrific that the children were living in.