Why it's taboo in Navajo culture to view the solar eclipse

Schools and government employees in the Navajo Nation will be changing their schedules because of the eclipse. 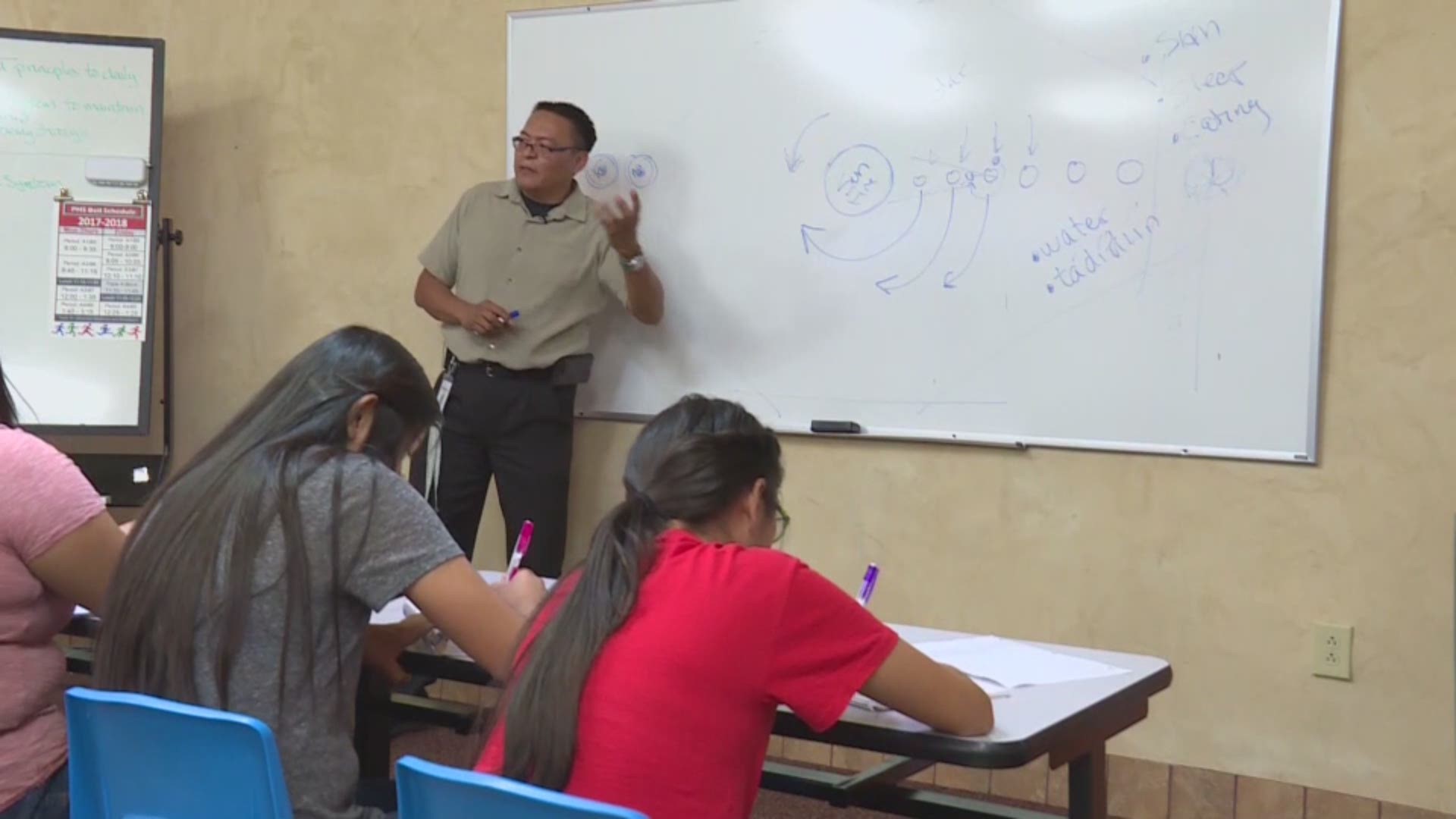 PAGE, Ariz. - Page Unified School District will be making changes to its class schedule Monday out of respect for Native American culture.

The total solar eclipse has prompted the district to modify its schedule because its student population is about 75-percent Native American.

"We did it out of respect for the Navajo community," said Lynne Hoffman, executive secretary for the Page Unified School District superintendent's office. "We modified our schedule, so we are following an inclement weather schedule."

According to traditional beliefs, viewing the eclipse could result in health and spiritual problems. Navajo beliefs warn against eating, sleeping or being out in the sun while a solar eclipse is happening.

"You're not supposed to be out in the sun because nature does change, the atmosphere, the lighting, everything changes," said Carlos Begay, a Navajo culture and language teacher at Page High School. "If you were to eat during an eclipse, it does cause eating disorders and even other things along the lines of disease. If you were to sleep during an eclipse, that's where sleeping deprivation comes from, eye problems come from, that's where blindness comes from, the list goes on."

Beliefs surrounding the eclipse started a long time ago while watching nature.

"Back in history, as Diné people, we were raised grazing livestock, horses, cattle and sheep," he said. "As an example, sheep knew what to do already. They would find the shade wouldn't graze anymore, they would settle in, put their heads down not even sleep, just huddle. So that tells you as a human being something is going on with nature. So animal behavior guides us."

The time surrounding the eclipse is a time for self-reflection and a time to show respect for the sun and the moon.

“It’s a time that the sun or the moon is changing itself. When its changing, it’s a time that you’re supposed to be reverent ," said Begay. "Because the sun in our culture, in our society, is the center of our universe.”

Many schools with a high percentage of Native American students are expecting lower attendance on Monday, but for the students in Page, school will still be in session.

Page Unified School District spoke to the Navajo Nation and other northern Arizona schools about their policies before they decided to alter their schedule.

Tuba City schools will not be open Monday.

The district sent a letter to parents explaining the schedule changes:

"Out of respect for our Native American communities, this memo is for the purpose of advising all parents of the schedule for Monday, August 21, 2017.

We have communicated with several different sources regarding this event, including other school districts, both on and off the reservation and have decided upon the following revisions to our schedules for that day.

The Eclipse is scheduled to begin at 9:13 a.m., and last through 12:01 p.m. All schools will be following an inclement weather schedule with any recess scheduled indoors. All lunches have been moved to 12:15 p.m., so that students will not be required to eat lunch until the Eclipse has passed. Likewise, arrangements will be made at both Page Middle School and Page High School for the passing of any classs during this time so that the students are not outside during the Eclipse.

There are some teachers who would like to share this rare experience with their students and, as a result, permissions slips will be sent home. If you do not want your child to participate in the viewing of the Eclipse, please make sure that you sign and return the permission slip to your child’s teacher indicating this."

"After careful planning and reflection, our Ganado Unified School District has elected to utilize our flexible calendar days, “snow days” to accommodate this unique need for personal reflection and family time, during the upcoming solar eclipse," O’Donnell said. "Affording our Ganado Unified School District families time to discuss and observe a sacred event in their homes, is something we, as a leadership team, felt was important to provide."

Navajo Nation employees will also be given eight hours of administrative leave from 8 a.m. to 5 p.m. because of the eclipse, according to a memo sent by Navajo Nation President Rusell Begaye.

"This notice serves to inform you that all Navajo Nation employees, regular and temporary, are granted eight (8) hours of administrative leave from 8:00 a.m. to 5:00 p.m. on Monday, August 21, 2017 due to the solar eclipse that will occur on that day.

During the eclipse, the moon (Tł’é’honaa’éí) will obstruct the sun (Jo'honaa'éí). In accordance with Diné teachings, one must not look at the eclipse, must respect the eclipse by maintaining stillness in their homes, and not partake of food and water during the period of the eclipse. At the conclusion of the eclipse, prayer is made using corn pollen in order to seek harmony among our families, relatives and Diné. The eclipse will occur on the Navajo Nation from approximately 9:00 a.m. to 2:00 p.m. on Monday.

We have been advised by our Diné medicine men to observe the natural occurrence in the manner guided by Diné fundamental laws. It is important to respect the teachings of our elders during the eclipse. The Navajo Nation Government must abide by our fundamental laws and respect natural, customary, traditional and common laws, as recognized in Title I of the Navajo Nation Code.

Therefore, we grant administrative leave so our employees are able to respect and follow these teachings. Those who are emergency personnel or on call are exempt, unless arrangements are authorized by your immediate supervisor."