Tara McSwain alongside Dalila Reynoso protested outside the Smith County Courthouse on the lack of mental health resources for veterans. 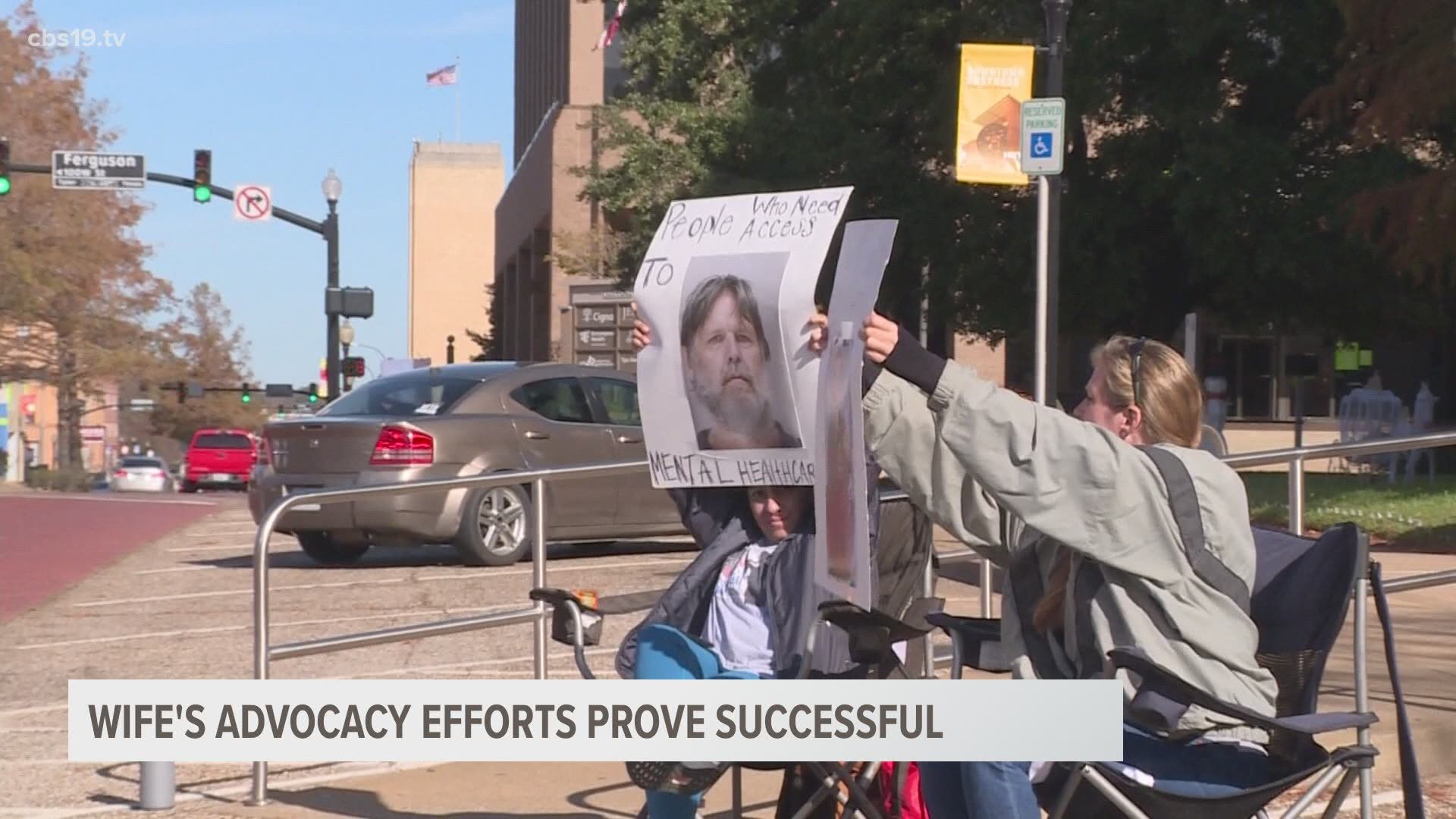 TYLER, Texas — A Tyler woman spent four days over the Thanksgiving weekend outside of the Smith County Courthouse in an attempt to raise awareness of the reality some inmates like her husband face.

Tara McSwain's efforts have been rewarded, her husband Chris is scheduled to be transferred out of the Smith County Jail and to a local health facility Wednesday night, but it's been an emotional journey.

Tara is a proud Army veteran's wife. Her husband Chris served 22-years. She says he retired from service after suffering a traumatic brain injury (TBI) in 2002, and later he was diagnosed with permanent and total as well as post-traumatic stress disorder (PTSD).

For the last four months, Chris has been behind bars. Tara says about a year and a half ago, he began to develop some combative issues with her, which she attributes to his mental illness.

After the family learned there wouldn't be a trial, Tara was told the veteran would be transferred to a state mental facility for restoration. However, there were 1,400 inmates ahead of him.

After reaching out to an advocacy group, Texas Jail Project, Tara connected with Dalila Reynoso and was able to have her first visit with Chris. However, it left her shocked by what she saw, and knew she couldn't wait for him to be transferred.

"He's lost over 100 pounds and is deteriorating by the day," Tara said. "It would have been a two-year wait inside this county jail."

There are no treatment facilities for TBI in the state of Texas. Not wanting to give up hope for her husband, Tara and Reynoso came up with the plan to demonstrate at the courthouse and bring attention to these issues.

Not only did the plan catch the eye of people in Downtown Tyler over the weekend, and by Monday she learned it had also gained the attention of state leaders.

"I got a call from Senator Cornyn his office, I received a phone call from the Texas Veterans Commission," she said. "The Texas Veterans commission actually reached out to Jacob Putnam, Larry Smith and confirmed every bit of information I gave them. Some of it was painfully honest because it's been a rough road for my family."

Monday night, Tara received the news that Chris would be transferred to a local health center. She says she's happy to know her husband will be in a hospital setting receiving treatment, but she knows there are others like him struggling with mental health behind bars.

"I would like to continue this journey because we have to find a place, a long-term care place not research, not a time rehabilitation place, we need to find a place where they can live with dignity," Tara said.

She shared her family's story before the Smith County Commissioners Court on Tuesday along with Reynoso, to continue her efforts for better mental health resources.

Tara has already started working on another veteran inmate's case.

As for Chris, she isn't sure if he's aware of what's happening but she's tried telling him. For now, she's happy knowing he's close and with doctors.