The proposed project would accommodate the ultimate design, which includes four lanes, two in each direction, with either a grassy median or a concrete barrier. 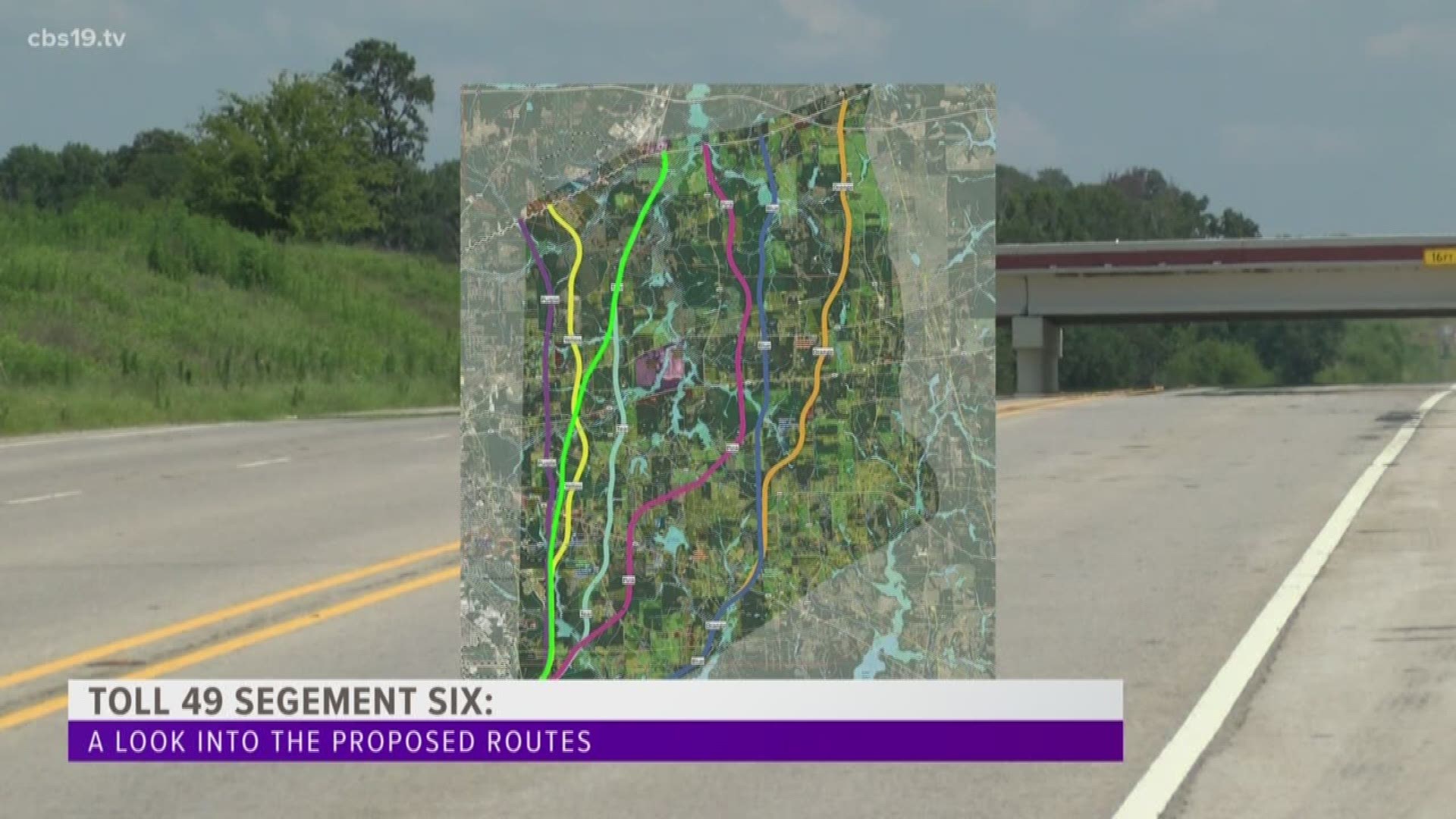 TYLER, Texas — Residents who live along the proposed Toll 49 Segment Six Project have a number of concerns about the project, among them are their homes being destroyed, their land being taken away and their water quality reduced.

The proposed project would accommodate the ultimate design, which includes four lanes, two in each direction, with either a grassy median or a concrete barrier between them. It also includes an interim two-lane, one lane in each direction, roadway with intermittent passing lanes.

Keep Loop Off Lake is a coalition of 450 people that feel those routes were not the best option. The group, with the help of CP&Y, a consultant group hired by NETRMA, designed their own path: The green route.

According to NET RMA, the cost for the expansion is estimated between $280 million and $410 million. This estimated cost includes construction, right-of-way acquisition and impacts to oil and gas wells. A spokesperson for the organization said NET RMA will be identifying funding through all available sources including, but not limited to, bond funds and federal grants and loans.

The purple route is around 10 miles long and would destroy 30 homes if chosen. The path is near Wise Elementary School and ends before the University of Texas Health Science Center at Tyler.

The yellow route is about 11 miles and 29 homes would be demolished. The purple and yellow routes start on the same path, but then split before State Highway 248. The yellow ends before the Health Science Center as well.

The purple and yellow routes are the only two that do not avoid railroad crossings.

The remaining paths all end past the UT Health Science Center.

The teal route is nearly 12.5 miles long and if picked, 33 homes would be torn down. Its location would be near Kissam Elementary School.

The green route is more than 12.5 miles and would destroy 12 homes. It is a combination of the purple, yellow and teal routes and would travel between the purple and yellow options, then take the same path as the teal route after Old Kilgore Highway. According to NET RMA, this proposal is being considered with the other options and will be measured against the same criteria.

The pink route is about 14 miles long. It is even closer to Kissam Elementary and would have the biggest impact on homes in the area with 52 destroyed if it is chosen.

For the last two routes, each are inside the city limits of New Chapel Hill. According to Keep Loop off Lake, the two routes would also be built on wetlands, both are issues the group wants to avoid.

The blue route is more than 15 miles long and would affect 40 houses. Coming in at the longest option, the orange route is around 16.5 miles and would destroy 41 homes.

Currently, the project is undergoing a feasibility study, which is expected to end early November. Then three options will be chosen for an Environmental Impact Statement.

This is where the routes will be reviewed for potential impacts to the human and natural environments. The study team will include the considerations of engineering, environmental and stakeholder input. All of this analysis will be used to identify the best possible route for Toll 49 Segment 6.

The next public meeting is anticipated for Spring 2020. To learn more, click here.