City Manager Edward Broussard says the city is on track to get back to normal. 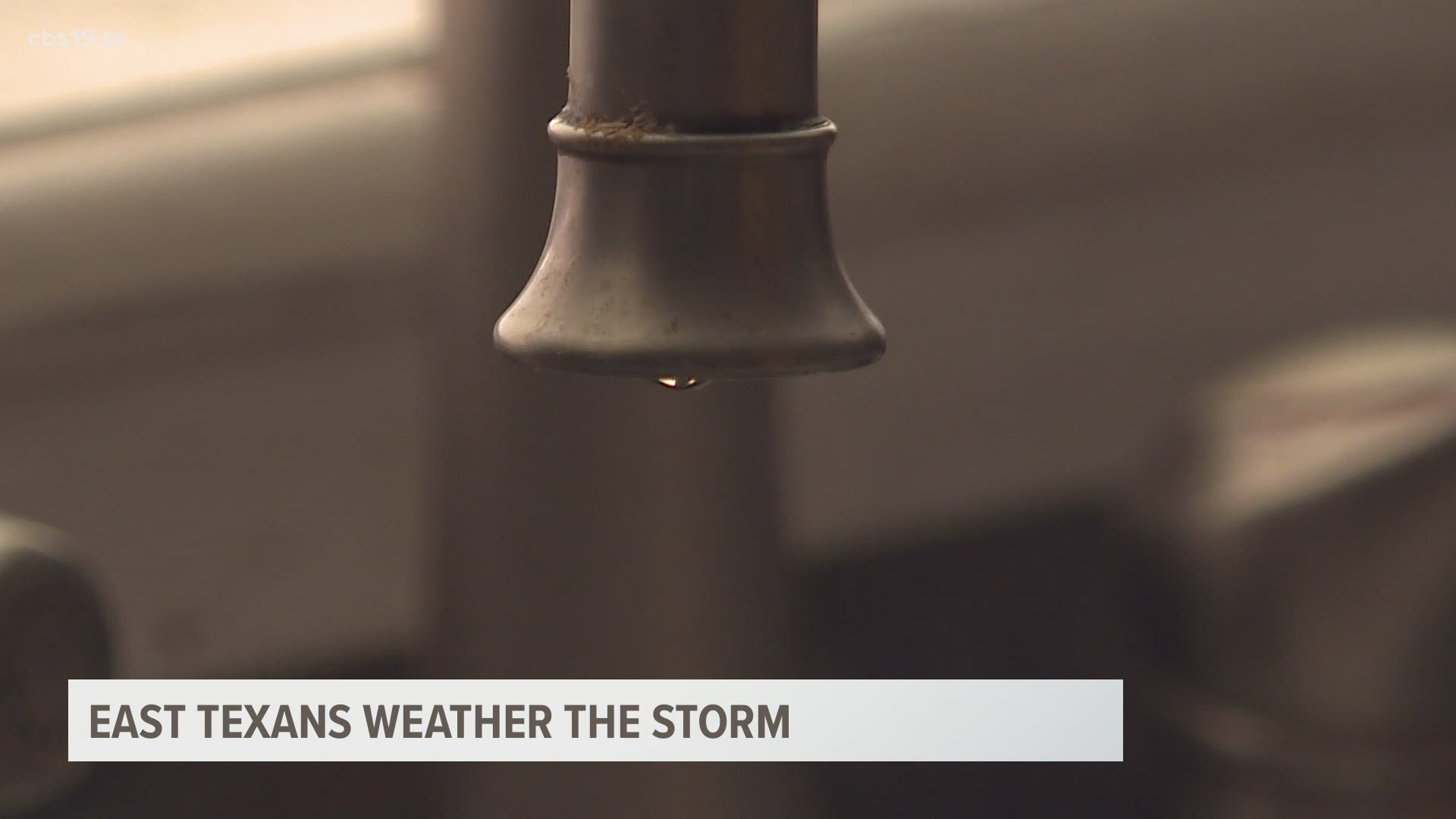 TYLER, Texas — After only having one water treatment plant to provide water for the Tyler community for nearly four days, the City of Tyler is one step closer to returning to normal.

City leaders reached out to Oncor Wednesday about returning the power after water pressure began running low in the city due to demand and a boil water notice was issued. The power was restored that afternoon and City Manager Edward Broussard says the city is on track to get back to normal.

"Now we still ask for people to use water conservation today and even into tomorrow," Broussard said. "Please treat water as though it is a scarce resource because until we can get the tanks and the towers completely filled back up again, pressure won't resume to normal levels."

.@CityofTyler City Manager Ed Broussard tells @PaytonWeidman @kytxcbs19 that water pressure is being restored and getting back to normal, but the city wants people to conserve today and tomorrow.

Mayor Don Warren says dealing with such low temperatures has been a learning experience for the city.

"One example is the generator out in the Lake Palestine Plant, you know, we had a hard time keeping it going because of the freezing temperatures, and all that," Warren explained. "So we need to look at ways to ensure that that generator even when it's negative six or 10 degrees that it will work properly."

Over the last several days, city crews were also addressing critical main water breaks and will continue to do so as repairs are needed.

The following are prioritized for repair:

The city manager says the storm sewer system is in good shape to handle melting snow and ice over the next few days.

However, another issue Broussard anticipates is trash disposal and possible damage from the snow. He says the city is looking into a bulky trash pickup day or placing dumpsters across the city for community members to utilize.

Trash pickups are tentatively scheduled on Friday and Saturday depending on road conditions.

While there were issues across the city, Warren says his take away from the week was positive after seeing the Tyler community come together to help one another. As the need for warming shelters arose, local churches stepped in to open their doors, as many city facilities were without electricity and/or water.

Warren explains it didn't stop with churches, NMDJ a taxi business offered to provide free rides to warming shelters, and volunteers offered their services to the cab company.

"What I've seen is is just an outpouring of love and support for people wanting to help people," he said.

Tyler Mayor @donaldpwarren praises all the churches and residents who volunteered space and services to keep people warm and safe this week.

More than 200 people in Tyler utilized a warming shelter. The Tyler Fire Department delivered 160 cots to the churches.

"So it really was a collaboration of just multiple nonprofits, businesses, the city together in order to be able to get warming centers open and running throughout our community," Broussard said.

The weather also impacted COVID vaccine clinics the North East Public Health District had scheduled. However, Broussard says they found a way on Thursday to make sure the shots were utilized before they expired by Friday.

"We were actually able to do a COVID-19 vaccine distribution at Bethel Church up in the northern part of Tyler, to be able to take care of people who were there," he said.

Broussard says Tyler Water Utilities customers who might have trouble paying their bill this month, can reach out to the city to discuss different options and resources. Water bills for many people will be lower, as Tyler's rates are mostly based on meter usage.