Hear more from those who attended the protests tonight on CBS19 News at 10. 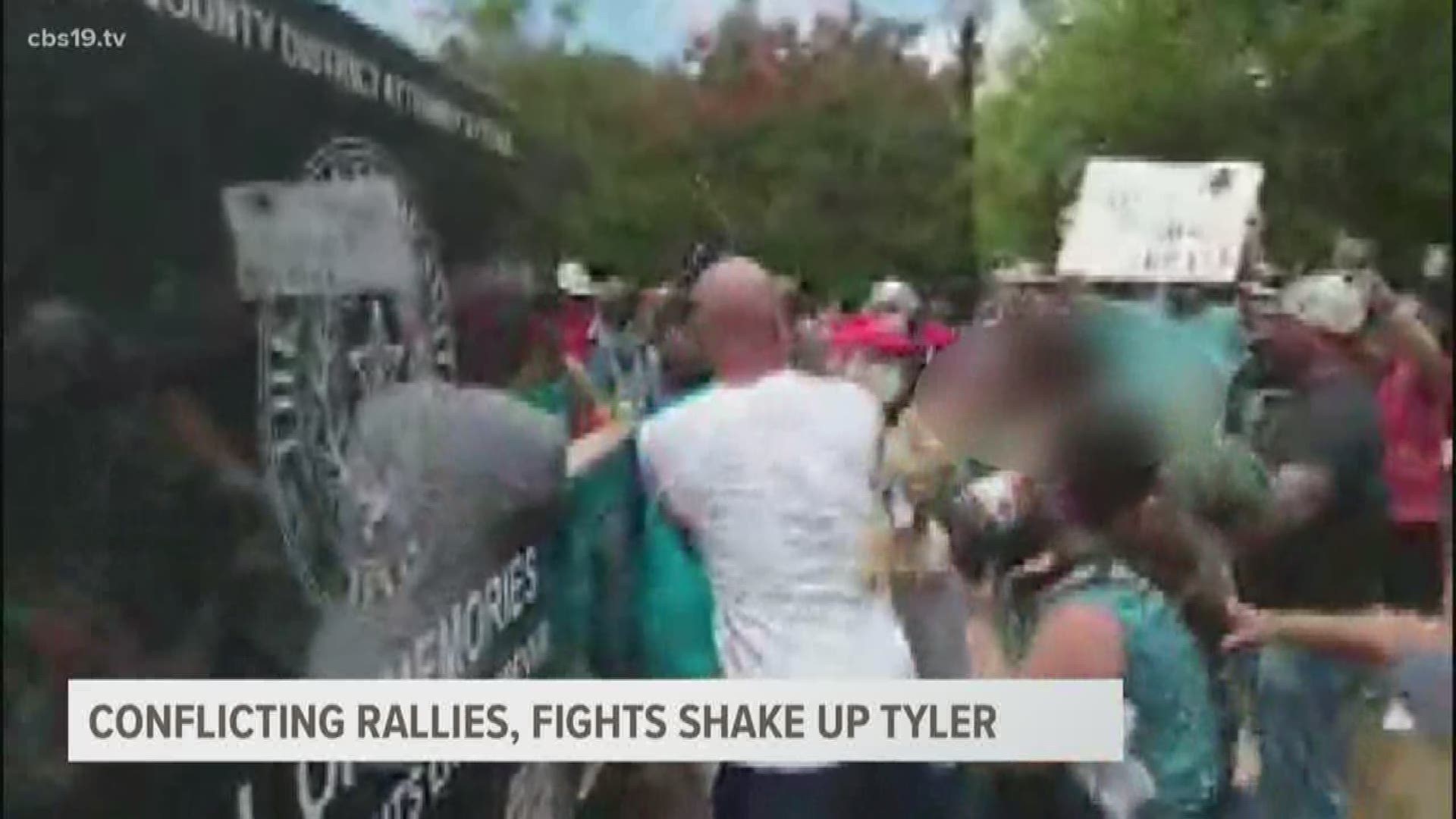 TYLER, Texas — A downtown protest was met with a counter-protest that led to fights Sunday afternoon in Tyler

Last week, congressional candidate Tyler businessman and rancher Hank Gilbert, who's looking to unseat Rep. Louie Gohmert, scheduled a #ProtestPortland rally to be held on the square in the heart of the Rose City to address what Gilbert calls "the unconstitutional use of federal law enforcement in Portland (Oregon) by President Trump."

Matt Lackritz is in downtown Tyler as protests and rallies continue.

In regards to the #ProtestPortland rally, Gilbert said in an interview with CBS19's newspaper partner, the Tyler Morning Telegraph, "the goal was to bring 1,000 East Texans to the courthouse square to protest the unconstitutional occupation of Portland and stand up for our constitutional rights."

After the #ProtestPortland rally was set up, a counter-protest Back the Blue rally was then scheduled to overlap it.

Organizers of conflicting rallies in Tyler explain their sides. The Back the Blue Rally was scheduled after the protest against violence in Portland. They overlap at the same time, same place on Sunday. https://t.co/tWBen5oEM5

Police told told the Tyler Morning Telegraph, they were monitoring social media made by Back the Blue supporters geared toward the #ProtestPortland group.

Police in Tyler will monitor a Back the Blue Rally which was scheduled after a Protest Portland Rally in Tyler today, and also tell me they are monitoring these social media posts. They overlap from 2 p.m. to 3 p.m. today in the square. pic.twitter.com/4nUp3FSDqb

"Dozens and dozens of people who came to our protest were scared away by these thugs with guns and let our campaign know in phone calls and texts," Gilbert says. "These thugs had every intention of starting a violent altercation from the minute we set foot on the square. They were chanting, 'Louie! Louie! Louie!' while my campaign manager was being beaten. I call on Louie Gohmert to immediately denounce the violence that his supporters wrought today on peaceful protesters."

WARNING: The video below contains foul language and violence, and may not be suitable for all ages.

Warning: Language and violence during the counter protests in Tyler Sunday.

Gilbert's campaign says a police report was filed with the Tyler Police Department concerning the violence.

"We fully intend to make sure that felony charges are brought against the person who stole Ryan's brand new iPhone, which costs enough that theft of that device is a felony in Texas," Gilbert said. "We also intend to ensure that those who attacked Ryan are prosecuted to the fullest extent of the law."

Paul Benson says he was also assaulted by Back the Blue supporters during the event.

A photo of Benson being choked was captured by Tyler Morning Telegraph photographer Sarah Miller.

Hear more from those who attended the protests tonight on CBS19 News at 10.

Tyler police step in after fight breaks out at protest pic.twitter.com/IStFvqDwXD