Wild hogs are responsible for over $90 million in crop damage and another $25 million in predation and disease issues associated with the livestock. 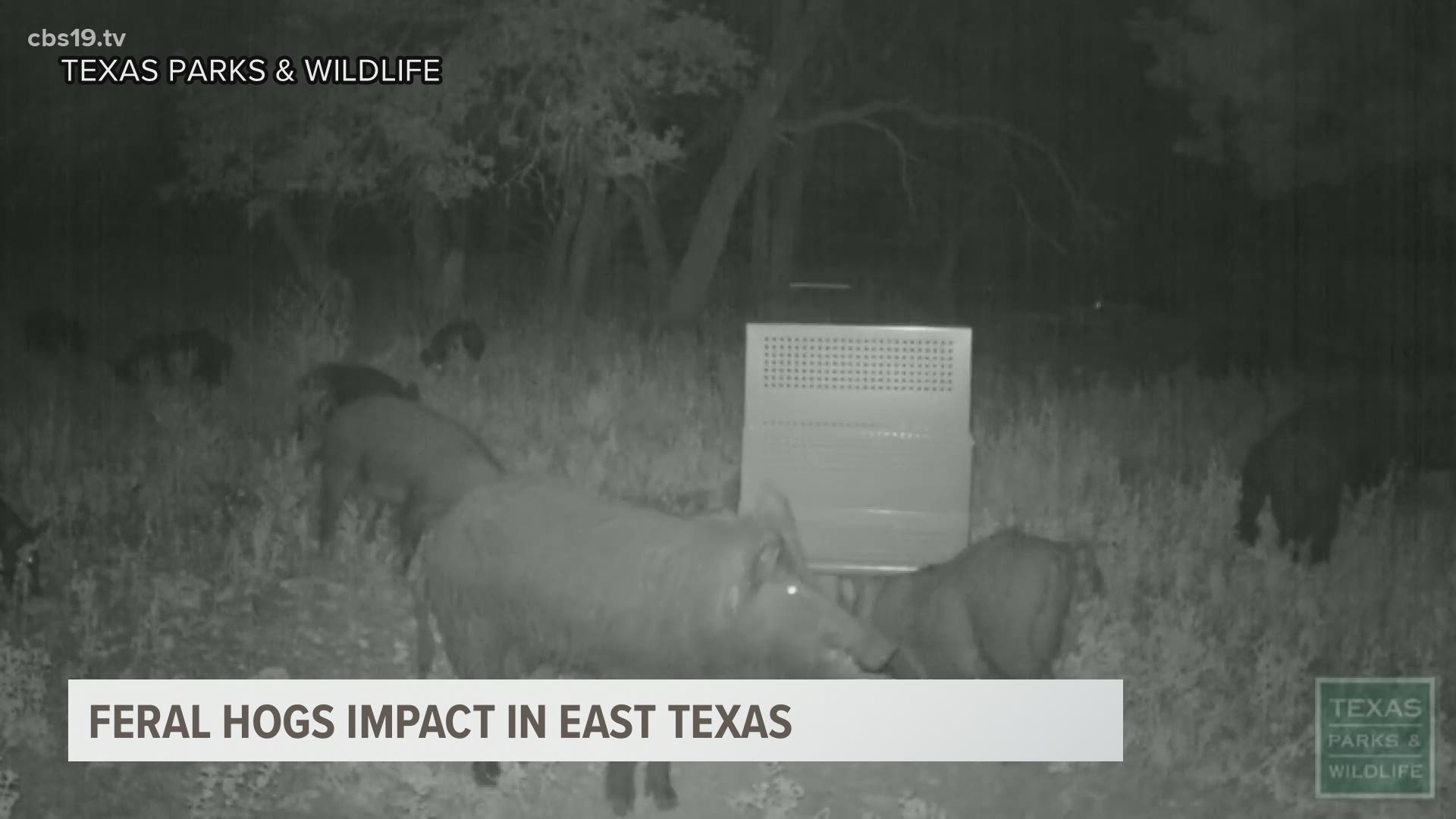 WOOD COUNTY, Texas — Feral hogs are an invasive species in the U.S. with 6 million across the country and 3 million in Texas.

"They're responsible for over $90 million worth of crop damage and another $25 million in predation and disease issues associated with the livestock," State Director for the Texas Wildlife Services Program Mike Bodenchuk said.

Most damage caused by wild pigs is through either rooting or the direct consumption of plant and animal materials. Rooting is the mechanism by which wild pigs unearth roots, tubers, fungi, and burrowing animals .They use their snouts to dig into the ground and turn over soil in search of food resources, altering the normal chemistry associated with nutrient cycling within the soil. Further, the mixing of soil horizons that often accompanies rooting by wild pigs has also been shown to alter vegetative communities, allowing for the establishment and spread of invasive plant species.

It has been estimated that a single wild pig can significantly disturb approximately 6.5 square feet in just one minute. This large-scale soil disturbance can increase soil erosion rates and have detrimental effects to sensitive ecological areas and critical habitats for species of concern. When wild pigs root or wallow in wetland or riparian areas, it tends to increase the nutrient concentration and total suspended solids in nearby waters due to erosion.

Bodenchuk has seen the hog population get out of control with the hogs now present in every Texas county except El Paso County. And one of the most concentrated areas is here in East Texas.

"In East Texas, we [a] have high numbers of pigs there, something in the neighborhood of 25-30 pigs per square mile," Bodenchuk said.

While not typically dangerous to people, their impact is consistently felt and leads to many hunting them for sport and to try and limit their numbers.

Just a few weeks ago in Mineola, Jonathan Roach with Texas Predator and Hog Hunting Adventures held a tournament to help get rid of the hogs

"This was our sixth annual tournament that we put on every year," Roach said. "[We] do it to give the hunters something to do. Also, they help control the population."

During the one-night tournament, Roach estimates 350 pigs were killed. And while that may sound like a lot, Bodenchuk has mixed feelings about the impact that's being made.

"Anybody who kills a pig is a friend of mine, I mean that we need some help," Bodenchuk said. "But it takes a concerted effort, it takes neighbors helping neighbors, and blocking uplands and trying very intensively to remove those hogs."