“We don’t have a detention center here, so I was like well might as well use my time and energy to see what we can do in the jail." 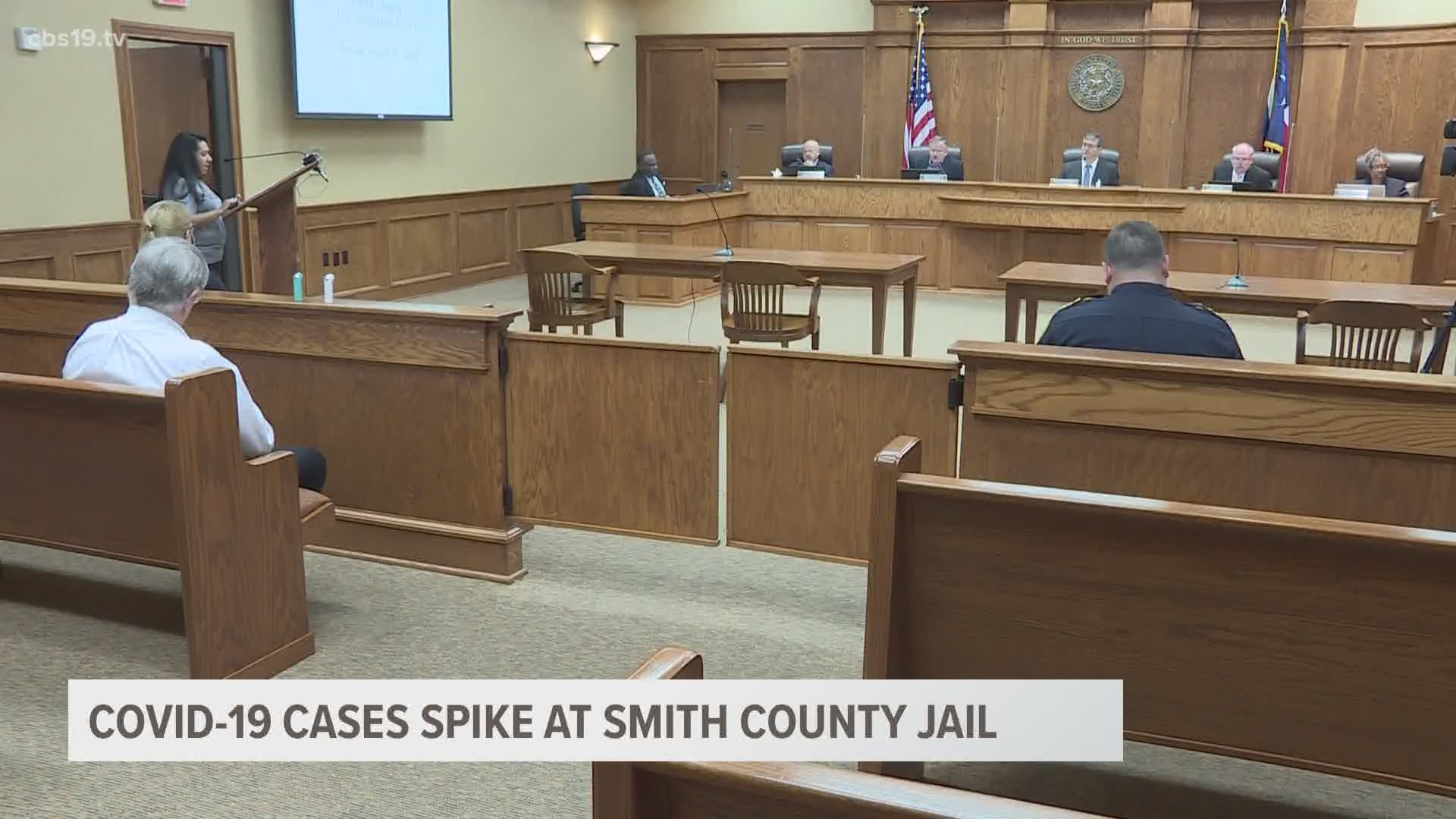 TYLER, Texas — Dalila Reynoso has worked as a community immigration advocate in the Smith County area since 2015, and at the beginning of 2020, she decided to turn her attention to the local jail.

“We don’t have a detention center here, so I was like well might as well use my time and energy to see what we can do in the jail since I had already built that rapport with the sheriff,” Reynoso said.

She had struck up a friendship with Smith County Sheriff Larry Smith after cornering him one morning to discuss the county’s 287(g) Program. This would come in handy once the pandemic hit East Texas.

Since March 17, Reynoso has spoken at almost every commissioners meeting held on Tuesdays, whether it was in person or on the phone during the shutdown.

“To address this problem that we are having, we have to be able to bring other stakeholders, leaders, our DAs, our judges, our sheriff and even, our county commissioners, because I do feel like they also have a responsibility when we talk about public health,” Reynoso said. “It does have an impact also in our community, not just our jail population.” At that March meeting, she asked the sheriff, who was in attendance, as well as the county commissioners, to think about releasing people sitting behind bars for pre-trial misdemeanors.

“These are individuals that have not been convicted of a crime, and for the most part, have a bond,” she said. “Sometimes those bonds are really high. There are individuals who are simply too poor or their families are especially, with COVID-19.”

During the meeting, the commissioners and sheriff discussed what Reynoso proposed and all agreed it was a good idea. Later that day, some inmates were released.

“The sheriff was going above and beyond the mass release that happened between mid-March and April,” she said.

Yet, COVID-19 would still make its way into the jail. In April, a Gregg County inmate with the virus was transferred to the Smith County Central Jail. The two sheriffs had made an agreement to house the first inmates to catch the virus, inside two negative pressure cells at the downtown Tyler facility.

After the transfer happened, Reynoso noticed in a video that the proper CDC guidelines were being not followed.

“I had already done a lot of research to what happens in tight spaces when social distancing can't be implemented,” she said. “So yeah, from there, that's when it took off.”

She had already been staking out the jail to ensure protective gear was being worn by inmates and detention officers, after that incident she also began checking the Texas Commission on Jail Standards website for COVID-19 cases.

While some might view those behind bars as criminals, Reynoso views them as someone’s loved one because she too knows what it’s like to worry about someone on the inside.

"I learned that, one of my childhood friends was in the Smith County Jail, and that she has a severe mental illness,” Reynoso said. “We have anywhere from 20 to 25% of our jail population with some form of mental illness.”

At least once a week, Reynoso meets with the sheriff and jail captain to discuss better mental health treatment, COVID-19 as well as other things. Families and those incarcerated reach out to her frequently to be their voice.

“I've already received over five calls and emails from individuals that are currently sitting in the county jail, because they too, are living to this pandemic, not just us.”

By May, all inmates at the Smith County Low Risk Facility were tested for coronavirus after an outbreak occurred, and one man passed away.

“In my opinion, he was one of those individuals that died because he was simply too poor to afford his bond,” she said.

As the number of cases dropped over the next two months, the jail’s population grew and is currently more than 1,000 which is around 200 more than it was at the start of the pandemic.

“Last week I saw like four or five releases happen, but it's not as fast as we would like it to be or the numbers as it was back in March," Reynoso said. “We could let those people who couldn't afford bond out of the jail to lower numbers and potentially lower the chances of people getting infected with the virus."

A new surge of COVID-19 cases is affecting both the jail’s facilities. Currently there are 125 at the North Jail( low risk). Test results are pending for the Central Jail, 12 inmates were previously confirmed to have the virus at that location.

Reynoso told the commissioners during a meeting Tuesday, Aug. 25, if someone looked at the jail’s daily booking reports, “you will see many individuals being arrested for minor non-violent citations.”

Over the summer, she started a new position as the community advocate with the Texas Jail Project and plans to continue speaking each week to the sheriff and jail captain as well as at commissioner meetings.

"We say we are community of faith, then we should also be considerate of our jail population,” she said. “Resources could be allocated to do more of the diversion and prevention, so they won't enter our jail or into our criminal justice system.”

Dalila Reynoso can be reached at 903-258-0005 or Dalila.reynoso@texasjailproject.org.