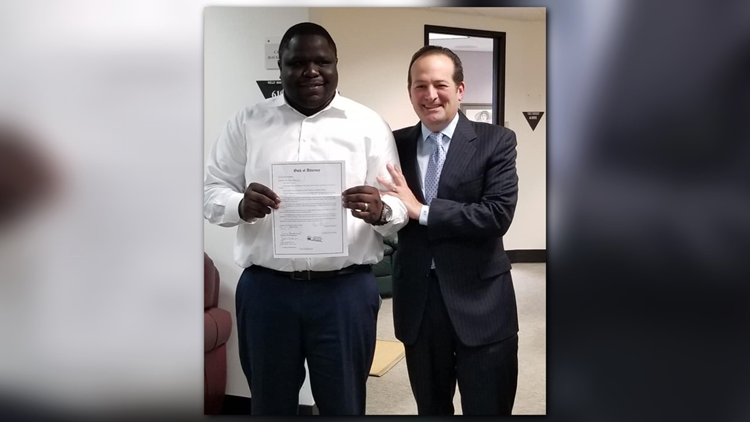 According to attorney Brian Tannebaum, his client, Raymon Burns previously spent some time behind bars and even lost custody his son.

After he was released, his dream was to work at Sports Authority.

"He filled out the application and told them about his past and assumed he wouldn't get the job, so he left with his mother and went and applied at Burger King where he heard he may have a better chance," says Tannebaum.

As Burns was walking through the parking lot of the fast food restaurant, Sports Authority called Burns' mother's cell phone, because he didn't have one. The manager then asked Burns to come in for an official interview.

"The gave him the job and, based on is intelligence and work ethic, his manager encouraged him to go to college," Tannebaum says.

Burns then went on to earn his Associate of Arts, then his bachelor's from Florida Atlantic University and even went to law school at Nova Southeastern University's Shepard Broad College of Law, where he earned his law degree.

On Monday, Tannebaum drove to Palm Beach, Florida, to let Burns know he had been admitted to the Florida Bar. The Florida Bar is the organization of all lawyers licensed by the Supreme Court of Florida to practice law in the state.

According to Burns' Facebook page, since October 2018, he has worked as a public defender for the Palm Beach County Public Defender's Office.

Burns' story is one of perseverance and dedication, as well as a testament to the phrase, "Anything is possible."