A make shift cross burned near St. Thomas AME church has members believe it was hate crime, but the Cherokee County Sheriff's office says its vandalism. 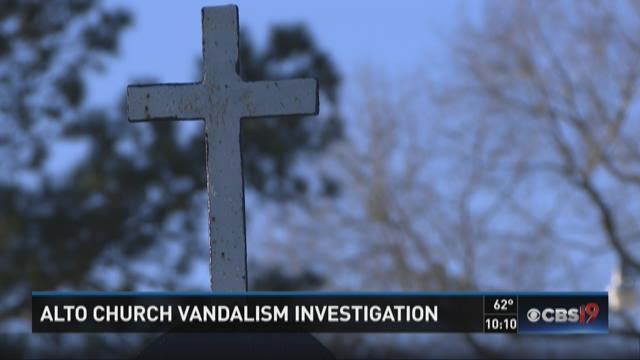 ALTO - Four tree limbs laid to the ground, resembling a cross and the Cherokee County Sheriff’s office said the crime doesn’t appear what it seems to be. The Church wasn’t even open for Sunday School when Pastor Bill Burton discovered this act of crime. It was a feeling he said he all was too familiar with.

"When I saw the cross burning, it was heart wrenching," Burton said. "Just brought back the 60s to my mind, back when they used to burn crosses at different churches."

According to Chief James Campbell, it appeared the tree limbs were put together to look like a cross, but it didn't seem like it was used to burn down the church. It also appeared that a water line to the church was busted and a rock was used to break one of the windows. The sheriff’s office didn't rush to deem the incident a hate crime.

Pastor Burton is convinced it was a hate crime because something like this has not happened to St. Thomas before.

"When you burn a cross on church ground that speaks for itself," Burton said.

They still had church that Sunday and will continue to do so. Pastor Burton said the act of crime won't have his congregation wading in fear.