The East Texas Church Security Coalition was started in 2018. Currently, about 60 area churches make up the group. 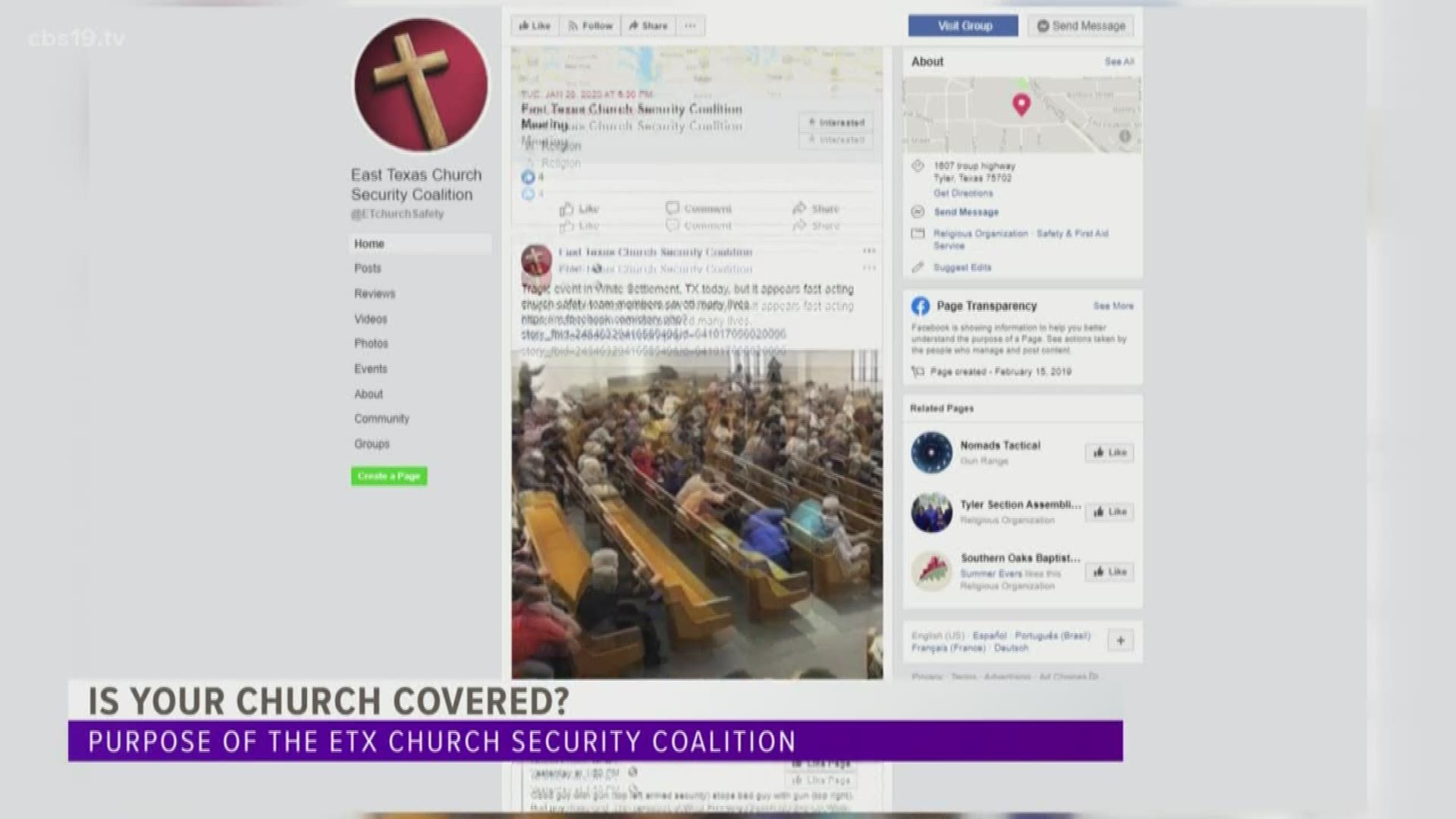 TYLER, Texas — The security team at the West Freeway Church in Christ in White Settlement received praise for their quick response in Sunday's tragic shooting. The team is one of many that take on the responsibility of protecting churchgoers across the state.

RELATED: Meet the man who 'took out' the active shooter at a Texas church

“The main thing is to be proactive," said Mike Collins, the head of security at Green Acres Baptist Church in Tyler. "I want to train people in our coalition to say, ‘If there’s a problem, let’s identity the problem in the parking lot or before they get into the doors and they’re actually in the worship center’, because that’s when most lives are in danger.'"

Last year, Collins founded the East Texas Church Security Coalition. He says the possibility of tragedies like Sunday's shooting are why the coalition exists.

"Twenty years ago, security wasn't even a thought," Collins said. "Things have changed. Society has deteriorated to a point where there's no respect for a place of worship, and I think that's sad."

Currently, about 60 area churches make up the coalition, including churches from Tyler, Longview and Palestine.

"Generally, if someone causes a problem at a church, other churches don't know about it," Collins explained. "I wanted to setup this coalition so that all the churches could communicate, share resources, and share information about known or possible threats in the community."

In addition to quarterly meetings and a Facebook page, the coalition also has an app that allows for real-time threats to be shared among the churches in the group.

"Our main point is that if we have people trained in the church that have gone through some basic training and not just some LTC class, which is easier to get," Collins said. "To let them handle the situation first, because they’re better equipped to handle a situation if something happened."

In Sunday's shooting, in addition to the churches security team being armed, so were several church members. It is a factor that Collins says is considered during active shooter training for churches in the coalition.

"We're always mindful of those around us who have firearms, because we live in Texas and license to carry is a very popular thing to do," Collins said."Number one, churches just have to make sure that they tell the parishioners that, 'we have a safety team and they're the ones that will be trained and they're the first ones to respond. So, you might want to pause for a moment and not take things into your hands, because you yourself can be deemed a threat.'"

While he hopes his team or any other in East Texas don't find themselves in a situation like the White Settlement attack, he says it is critical that every church is prepared and proactive in making a plan to combat potential safety concerns.

"Large churches have more resources but they have more square footage and more people to cover. Smaller churches have fewer resources, but they have fewer doors and fewer people to take care of and protect," Collins explained. "We're all in this together, and our goal is to make sure that each and every church does what they can to protect the members of their church."

While aware that not everyone supports guns in the church, Collins says it is a necessity for the times we are living in.

“The only way to stop a bad guy with a gun is a good guy with a gun," Collins said. "It’s the only way you can deal with that. I believe the more responsible people that are armed, the safer our society is because it discourages crime against people.”

The East Texas Church Security Coalition will have its next meeting on Tuesday, January 28 at 6:30 p.m. in the main worship center at Green Acres Baptist Church. Collins welcomes any churches that may be interested in forming a new security team or receiving training for one already established.

RELATED: "It destroys my heart" | Minister at West Freeway Church of Christ is Longview-native