What started as an urban farming competition, ignited a national movement. 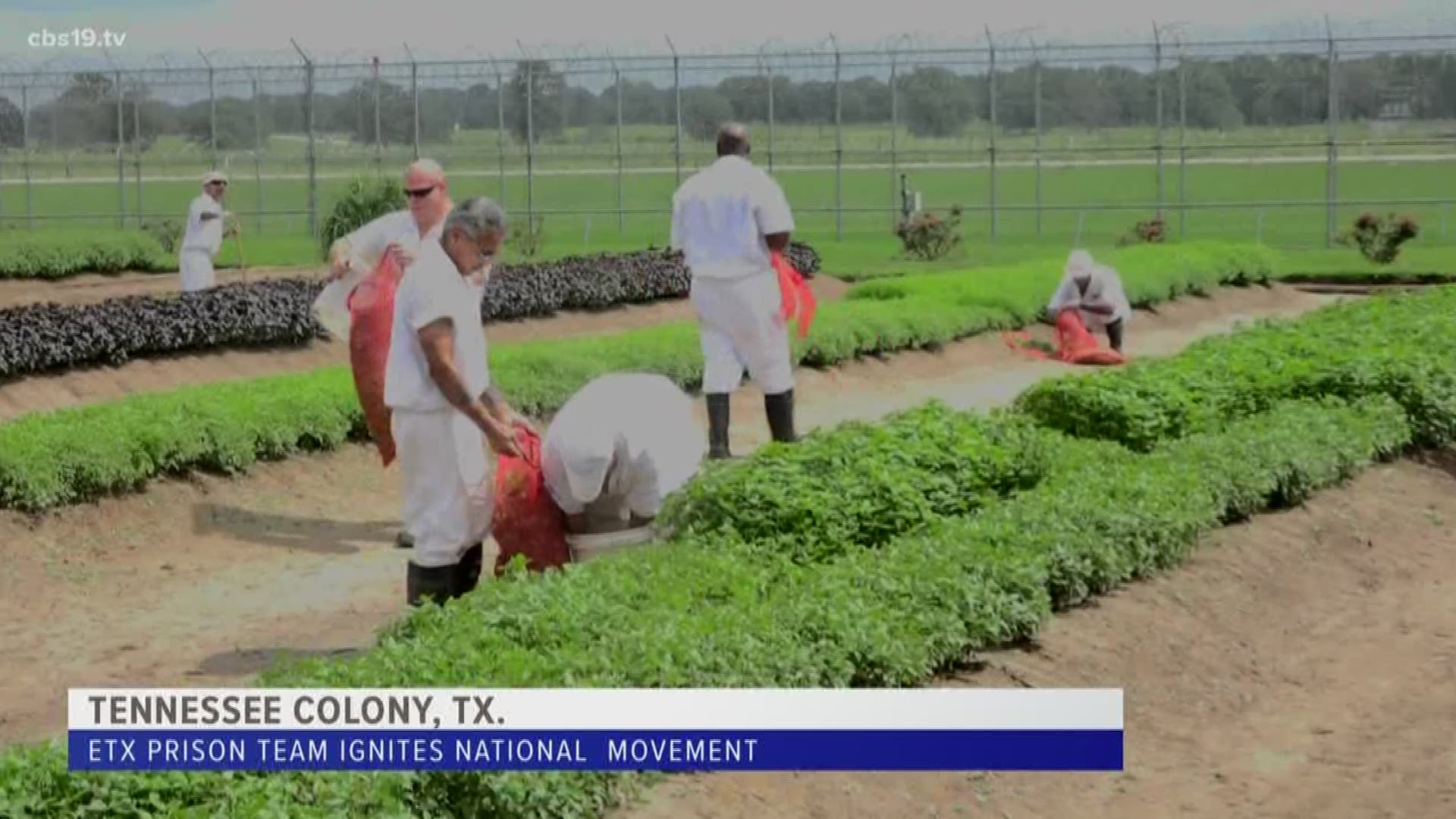 An unlikely team is forming inside one of the largest maximum security prisons in the state of Texas.

For the first time in East Texas history, offenders and officers joined forces to start a new project based in sustainable agriculture that is transforming not only perception, but the men incarcerated there, the officers, and other prison units across the state of Texas.

It has become so popular that offenders from other prisons, are trying to get into the Mark W. Michael unit in Tennessee Colony.

What started as an urban farming competition ignited a new passion. Their herb and fresh produce gardens grew at rates that broke their own 30-year record. Last year, they harvested a whopping 1.9 million pounds from their 400 acre garden. That same year, their herb garden alone yielded 14,000 pounds.

"I've been here for 29 years," she said. "I have not seen anything impact offenders, the way this has."

Hinajosa runs the Herbs Behind Bars garden, named after the statewide correctional competition. She said not all offenders are eligible to participate. They must earn their way into being part of what is called the Honor Squad.

"I have a lot of offenders who walk up to me and they want come work for me, and I'll tell them right off the bat, 'I'm going to check your disciplinary record, I don't want troublemakers out here'" Hinajosa said. "If you were at one time a troublemaker and I see that you've made a little bit of progress or you're trying, I'll give you that chance to try to be what the rest of these guys have become."

It's a chance she said they may never have been given on the outside.

"It changes a lot of them," she said. "I have some offenders that some people might say just looking at their criminal record that they are hardened criminals, but they come out here, they get into this job and it makes them care about stuff, it teaches them to be kind, to be gentle and to be somebody else and care about others and not just themselves."

In terms of rehabilitation, this program has had nearly a 100 percent success rate for the Michael Unit. A rate that started with Delvin Mouton.

"I came out here I had no goal, no motive," Mouton said. "I got locked up real young so I didn't really have a sense of responsibility. I came working out here for lieutenant White in the field force, and that gave me a chance to be a good leader, use my leadership skills. It gave me an opportunity to learn, to help instruct other men in what we do out here, taught me responsibility, gave me an extra sense of hope, also let me know that I wasn't just an offender, I was still human. Sometimes there's no way for us to give back, some of us don't have family members to give back to. So knowing what we're doing here, your own hard work and sweat is going outside the gate to help somebody that doesn't have, man that's wonderful."

Johnny Davila is another member of the Honor Squad. He was moved from another unit to the Michael Unit because of his violent history.

"I'm here for capital murder, i was gang affiliated for many years, that's kind of the reason i got sent over here," Davila said. "I gave my life to the Lord and when I did I got put in here."

He said the transition already going on inside him crystalized when he joined the Honor Squad.

"It's a blessing because I had just came to Christ when I got put out here," Davila said. "I was reading the word about harvesting, reaping, sowing and I had an understand of it but I learn with my hands, I'm an artist. So as I did it with my hands I had revelation I said 'Wow this is what he's talking about, this is watching something you minister to grow, you render aid, you watch it grow, and then you harvest it and you reap the benefits of that harvest.'"

Vernon McClesky tends to the elaborate hydroponic and aquaponic sections of the operation, which are composed almost entirely of recycled components. Other parts were paid for from the pockets of the officers. McClesky said he now sees a future outside of the unit.

"In terms of a career I would like to have my own hydroponic system at home," he said. "I also want to start a small landscaping business that way I can give back to my community as well as earn a living for myself."

Over the past two years, the team painstakingly chronicled each success, each failure, each re-purposed bathtub and trampoline net for the sole purpose of sharing their knowledge so other organizations can share the same success.

Correctional agency leadership began hosting them to train field force bosses from across the region, and micro-systems started popping up throughout the Texas correctional system. Officer Michael McLeon said the offenders passion for the project could be driven by what they feel is like a second opportunity at life.

"This is like them being able to go, 'Even though I messed up in the past, I can actively make a difference outside, in the free world," McLeon said. "Some of our guys, it gives them a reason to wake up in the morning. It gives them a reason like, 'Hey I'm gonna go outside and I'm going to weed flowers for a couple hours but I know I'm going to be making a difference, and that in turn has got a lot of guys excited."

Ultimately, if other correctional systems continue to adopt the Michael Unit's methods of growing, experts say it could save millions of taxpayers' dollars through reducing food costs, reducing health care issues, recidivism rates and much more.

We visited with a man who is doing his part to promote sustainable agriculture on his side of the country. Tommy norris is the chairman of the Sustainability Committee for the American Correctional Association. He then created GreenPrisons.org, a project designed to foster a national conversation on sustainability in corrections.

Norris said he has seen hydroponic and aquaponic operations across the country, but the Michael Unit's is the largest.

"It's really phenomenal what they have going there," Norris said. "You get a real bang for your buck in terms of taxpayer investment in these programs and also into these people, 95 percent of which are going to return to the communities. 95 percent of them are going to be your neighbor. Wouldn't you rather have them growing gardens than cooking meth? It's simple, give them the skills, different skills, new skills and 9 times out of ten they'll do it. I've met some x-offenders who've found jobs, that can't imagine themselves doing anything else now."

For a few hours a day, offenders leave the Unit's fast pace to reflect but officer Hinajosa says the offenders lives, aren't the only ones that have changed.

"For me it's like I feel like I've changed someone's life," she said. "At the end of the day I've accomplished something."

The efforts at the Michael Unit have earned them invitations to participate in research projects, and speak across the country. Officers were recently invited to be featured at the February 2019 TedX conference in Dallas. They're also scheduled to headline a sustainability workshop for the ACA.

Meanwhile, the message of hope is spreading, much like the roots of the project and the growth of the lives cultivating it; that confinement, doesn't have to be confining.