A large fire involving the chemical ammonium nitrate broke out at Valley Feed Mill on Coke Road in Winnsboro. Wood County authorities instituted mandatory evacuations for home and businesses within a half-mile from the plant. 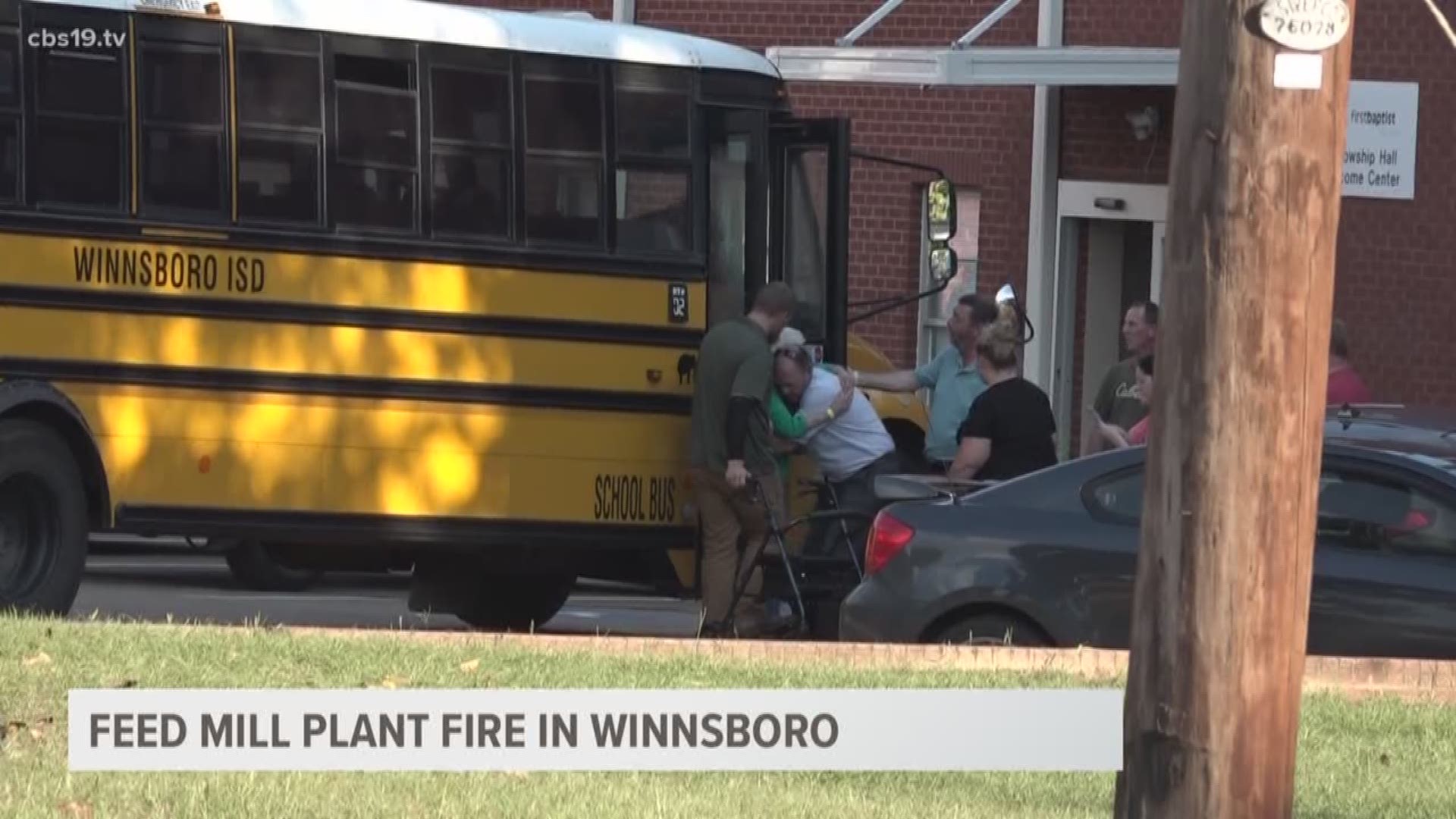 WINNSBORO — UPDATE: According to Richard Lenius with Lonestar Hazmat, Roughly 96,000 pounds of ammonium nitrate was being stored at the Winnsboro facility.

Only about 25,000 pounds were stored at the plant in West, Texas.

Leniuis also mentioned that the Winnsboro plant did properly store the ammonium nitrate.

Workers were doing repairs inside, cut an electrical line that caused a spark that led to the fire.

The next day, the ammonium nitrate was all removed from Valley Feed Mill.

Leniuis said that the difference between Winnsboro and West, Texas was that ammonium nitrate "was stored in an enclosed environment.”

Wood County authorities lifted the evacuation order for the area around the Valley Feed Mill in Winnsboro Wednesday.

Hazmat, the EPA and TCEQ all recommended lifting the evacuation after looking at the air quality in the area. The announcement came shortly after 11 a.m.

Winnsboro City Administrator Craig Lindholm says the EPA and TCEQ continued to monitor the air quality throughout the night and they believe there are signs of improvement.

The ammonium nitrate is no longer burning but is still smoldering in small areas.

What you need to know

The fire is at the Valley Feed Mill plan which is near Brookshire's and Tractor Supply in the city. The fire is mostly centered on the fertilizer side of the building.

Wood County officials confirmed ammonium nitrate is the chemical involved in the fire. Lindholm says the levels of ammonium nitrate released into the air are not toxic, but can cause irritation and breathing problems for those with respiratory problems.

So far, no injuries have been reported.

READ MORE: Ammonium nitrate: What it is and why it's dangerous

The first call came in at about 12:15 p.m. Fire units quickly set up a command post at Church of Christ on Coke Road Tuesday afternoon.

Originally, firefighters set up an evacuation zone for homes and businesses with 1,000 feet of the plant. That zone was later increased to 1,500 feet and then to a one-half mile radius.

Several fire units from around the area responded, including hazmat teams. Firefighters determined the safest possible thing to do would be to let the fire burn itself out.

‪#Update: Winnsboro Police just clarified that the evacuation is only for within 1,000 or so feet of the Valley Feed Mill, despite initial reports from a fire crew. #WinnsboroFire #ValleyFeedMill KYTX CBS19

There were several homes and businesses evacuated due to the fumes from the fire and risk of an explosion. Evacuees were encouraged to go to Rocks Gym.

The first evacuations happened at 1:30 p.m. After briefly being allowed to return, residents and workers in the area were again told to evacuate at about 3:30 p.m. Most of the buildings were evacuated were commercial.

"We were getting ready for dinner," evacuee Tim Miller. "My wife got it all prepared. And we were sitting down for dinner and we get another knock at the door from Winnsboro fire department saying we need to evacuate again and it was mandatory again."

The city says mandatory evacuations remained in place throughout the night. Craig Lindholm says five families were relocated to hotels.

Autumn Wind Assisted Living Facility, located a half a mile away from the plant, evacuated their residents to area churches using area school buses and church buses. Some of the residents wore masks as they were loaded onto the buses. The entire facility was evacuated by 5:30 p.m.

"We started following our disaster plan immediately," Autumn Wind CEO Wayne Powell said. "We called on sister facilities throughout East Texas to get personnel and busses over here as soon as possible."

Residents were relocated to area hotels.

On Wednesday morning, Autumn Wind began moving residents back into the facility. Families who picked up residents are encouraged not to drop off the resident until 4 p.m.

I’ve been told pizza has been delivered and people are enjoying dinner while the staff of the Autumn Wind Assisted Living facility are preparing for an overnight stay at the churches. #WinnsboroFire @kytxcbs19

Autumn Wind Assisted Living in Winnsboro is being evacuated.

Posted by The Darcy Birden on Tuesday, September 25, 2018

The Winnsboro Animal Shelter was evacuated. The animals are still inside the shelter, but fumes will be able to flow outside the facility.

According to a Facebook post by business owner Brandy Embrey, whose Vintage and Vines store is located within a half-mile of the fire, officials told her to evacuate the store due to the air quality and risk for an explosion.

A Tectran warehouse was also being evacuated as was Cattle Sake Barn.

For those who are not in the evacuation zone, the city recommended they stay put.

"We recommend that everyone stay inside and keep the windows down," Winnsboro city administrator Craig Lindholm said. "Keep the air on."

Authorities determined it is safe for those outside of the evacuation zone to go outside.

Firefighters do not yet know the cause for the fire. Instead, they are waiting for the smoldering to put itself out with the assistance of rain before beginning an investigation.

Lindholm says authorities are not concerned as of now, but are acting out of caution.

The Red Cross was on the scene assisting the evacuees at Rocks Gym. They continue to be on the scene helping evacuee Wednesday.

"The American Red Cross is here in Winnsboro to support the emergency management of Wood County," Red Cross Disaster Program Director Douglas Haning said. "We're providing support with food, water, just helping with any of the evacuees that were displaced by the fire."

The Winnsboro community reached out to both evacuees and first responders with donations of food and water. The city originally accepted donations, but now says donations are no longer needed.

The superintendent of Winnsboro schools, Susan Morton, said on a community Facebook page buses will be rerouted Wednesday to avoid Coke Road and Highway 11.

Also Memorial Middle School in Winnsboro, located about one and half miles from the Valley Feed Mill, will hold all school activities indoors and will have their "See You at the Pole" event inside the gym.

BREAKING UPDATE: LaDyrian Cole brings you a live update from a mill fire in Winnsboro: https://bit.ly/2QYAGu7

#Breaking: Multiple fire departments are attempting to put out a fire at the Valley Feed Mill in Winnsboro. FM515, aka Coke Rd, is shut down to traffic in both directions. They have issued an evacuation of nearby buildings due to toxic materials being burned. Stay tuned to KYTX CBS19 for more details. #CBS19