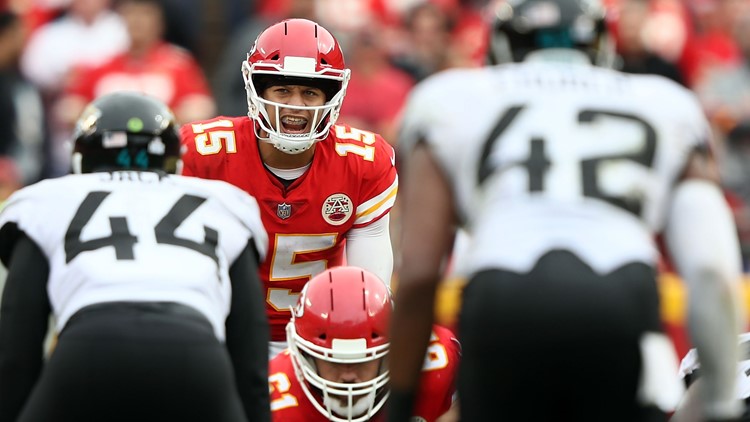 Photo by: Jamie Squire
Quarterback Patrick Mahomes #15 of the Kansas City Chiefs in action during the game against the Jacksonville Jaguars at Arrowhead Stadium on October 7, 2018 in Kansas City, Missouri. (Photo by Jamie Squire/Getty Images)

ESPN recently published a profile piece on Mahomes where the young QB admitted he puts ketchup on everything, including his steaks.

"The other day, in Mahomes' apartment in the Country Club Plaza neighborhood of Kansas City, his grandfather asked him, "What's it like to be famous?" For one thing, it means he eats less ketchup. He spent most of his life putting ketchup on everything. He would get bottles of it for his birthday. But now that everyone is watching every move he makes, he is sheepish about ordering ketchup. At a restaurant recently, his mom, Randi, recognized an unfilled desire as he dove into a steak. "Just ask for it," Randi said. "I know you want it." Patrick wouldn't. So she asked for the ketchup and slipped it to him."

Well, after that, it didn't long for ketchup manufacturer Heinz to jump on the #MahomesMania bandwagon, as they offered him a lifetime supply of free ketchup for his steaks if he reaches 57 touchdowns.

Hey @patrickmahomes5, you give us 57 touchdowns, we’ll give you Heinz on your steak for life. https://t.co/UeZdmMZUnv

We think it's safe to say Mahomes will be rolling in the condiment sooner rather than later.

As of Thursday, Mahomes has recorded 31 touchdowns and seven interceptions for 3,150 yards and a passer rating of 117.4. He also holds the record for the most touchdown passes thrown through the first three career games of a season and is the youngest player in NFL history with a six-touchdown game.

The East Texan also recently became Advocare's newest endorser and the company is giving away 15 autographed footballs to celebrate the partnership.

The Kansas City Chiefs take on the Los Angeles Rams, in what could be a Super Bowl LII preview, Monday, November 19, at 7:15 p.m., on ESPN.