The fire at K-Solv sent large plumes of black smoke into the air and forced a shelter-in-place order to be issued for two nearby neighborhoods. 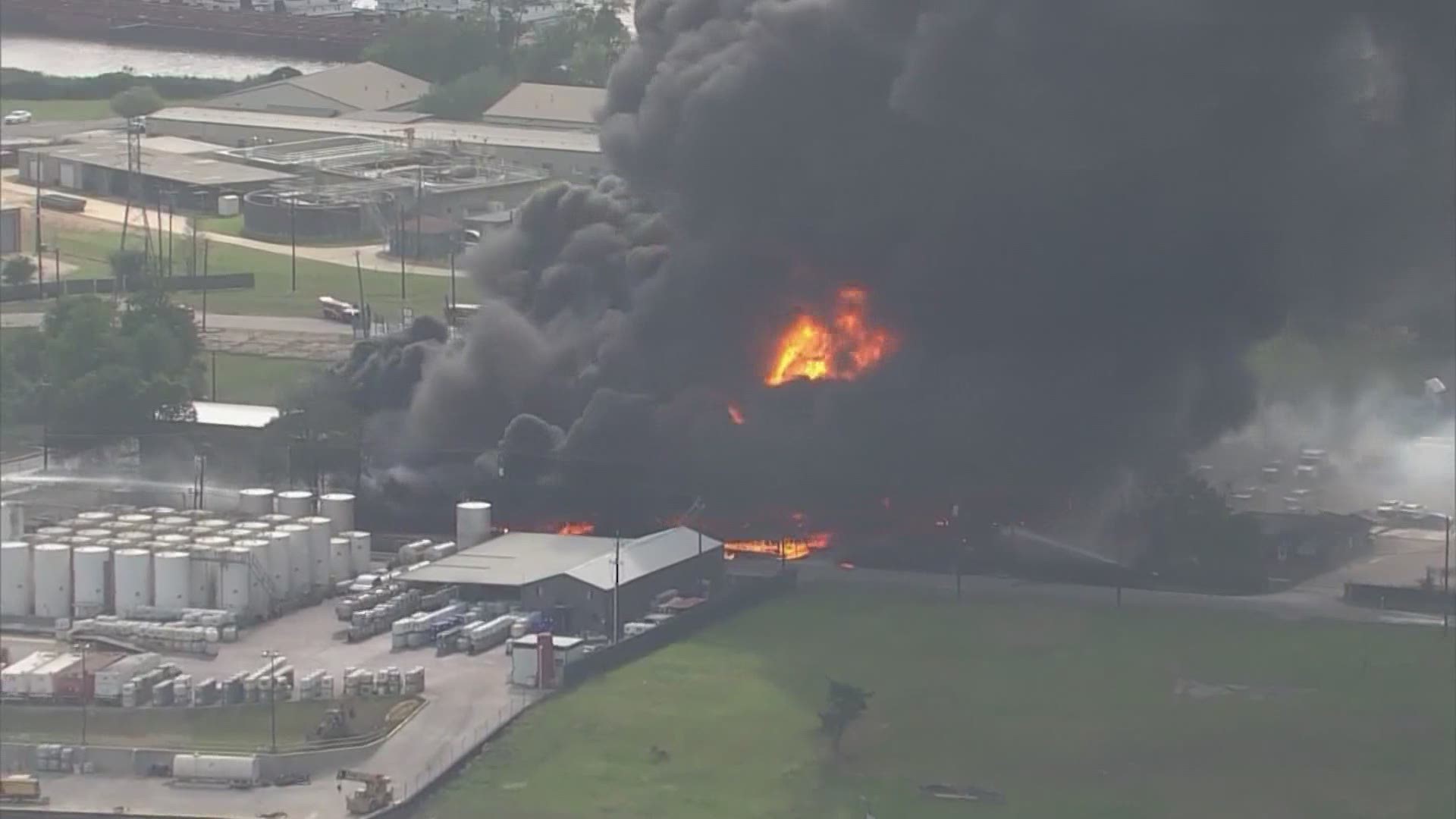 HARRIS COUNTY, Texas — A fire at an east Harris County industrial facility on Wednesday led to a shelter-in-place order for two nearby neighborhoods.

The fire was burning in the Channelview area at the K-Solv facility in the 1000 block of Lakeside Drive. The thick black smoke from the fire could be seen for miles. And when Air 11 was over it, we could also see cars burning in the parking lot.

Lakeside, Northshore, Hardy and De Zavala streets were closed in the area as crews worked to control the fire.

According to K-Solv, the fire started during a drum transfer operation, which is what they call the process of transferring a product from a drum to a smaller container.

K-Solv posted a tweet to report that all of their employees were accounted for. A company official later said one employee was taken to an area hospital as a precaution due to mild respiratory irritation.

4/7/21 – There is an active situation occurring at the K-Solv Chemicals facility located in Channelview, TX. All employees are safe and accounted for. Firefighters and response crews are responding to the scene. We are monitoring the air quality and will have updates to follow. pic.twitter.com/XbhpnE3Noq

At 8 p.m. Wednesday, Harris County Judge Lina Hidalgo told reporters the fire was out, but there was still a slight chance of it reigniting. Firefighters would be on site monitoring the area until there was no more risk of it restarting.

This fire happened 2 miles away from the ITC fire that burned for several days in 2019. Judge Hidalgo said the county made significant investments and changed policies in how they respond to these types of incidents and it paid off today.

"If you remember during ITC fire, we scrambled. We had to bring contractors from out of town to monitor our air. This time we had it ready as soon as the fire started, we had a reading. Since then we've continued to do readings but we havent identified any elevated levels that would be of concern to health," Judge Hidalgo said.

K-Solv said it believes all runoff was contained, but Judge Hidalgo said they won't be taking any chances and will be testing the water, too.

"I've spoken with the Coast Guard. They are working to look at impact of the waterways, to set up booms, there's some runoff of materials into the water. You can see it seeping from the area of the fire," Judge Hidalgo said.

According to the Harris County Fire Marshal's Office, the facility housed several chemicals, including, but not limited to, hydrochloric acid, acetone, ethanol, ethylene dichloride and other acids.

According to their website, KSolv works in chemical distribution and maritime services, so they're more of a storage and distribution company.

We can tell you after checking with EPA, we found no significant violations over the last three years, according to EPA.

But if you go back a little further, they were fined in 2016. They were hit with a $50,000 fine for not properly reporting their use and any releases of certain toxic chemicals. They reportedly failed to make the reports three years in a row from 2010 to2013.

There was also a tanker explosion in 2007, in which a worker suffered burns.

KHOU11’s Jeremy Rogalski explains in the video below.

Houston Fire Department Assistant Chief Mike Mire said the incident was under control at about 6 p.m. He said there was no threat to anyone in the area or the environment.

Listen to an interview with Mire in the video below: