On Wednesday, officials responded to a major crash on SH 64 E. that sent three people, including an infant, to the hospital. 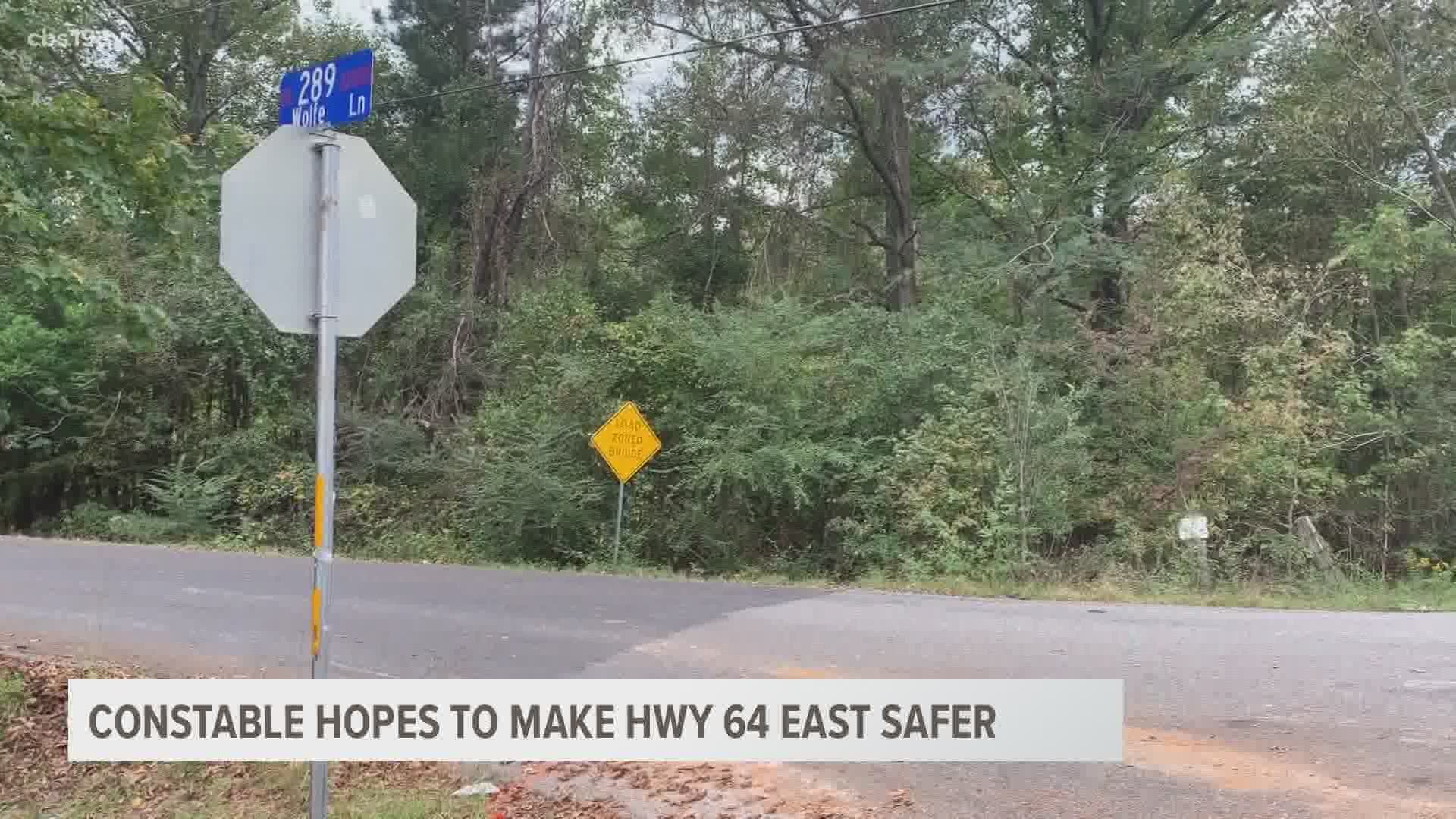 SMITH COUNTY, Texas — As Chapel Hill's population continues to grow, so does the traffic along State Highway 64 East. With more cars in the area, there are also more crashes.

Smith County Precinct 4 Constable Josh Joplin is familiar with Hwy 64, not only for the accidents he's worked on the road but because he has cattle on Wolfe Lane.

On Wednesday, the dangerousness of the road was witnessed by the community when a car was attempting to make a left turn onto Wolfe Lane. While stopped, another car rear-ended the vehicle, sending it into oncoming traffic where it was then struck by a gasoline tanker. Three people, including an infant, were taken to local hospitals.

RELATED: 3 hospitalized, including infant, after 3-vehicle crash on SH 64 East in Chapel Hill

Joplin says when news of the accident reached State Representative Matt Schaefer, he received a call as to what was going on in the area.

"Then he and I started talking about what we could do, working with TxDOT," Joplin said. "This is a state road, it's not the county's responsibility."

In a statement sent to CBS19, Schaefer wrote:

"I have listened to the residents and first responders who have worked the accidents. Something needs to be done about this dangerous intersection. I am working with TxDOT on options to make it safer. I have asked for the speed limit to be lowered, flashing lights to be installed on the intersection sign, and for a turn lane to be constructed."

Joplin too feels a turn lane would be the best option for the intersection at Wolfe Lane, as well as lowering the speed limit.

"I do believe that within the next week or two we will meet again and discuss the best possible routes, and options for this community, for this highway," Joplin said. "I'm hoping that this will be a stepping stone to help us increase safety for other roadways in this area as well.”

The constable says he and his deputies respond to more wrecks at the Wolfe Lane intersection than anywhere else on the highway for his precinct.

Hwy 64 East turns into a two-lane road after Chapel Hill and the speed limit is 60 mph, but Wolfe Lane sits at the bottom of hills for both directions.

"As of right now when they want to turn on Wolfe Lane, they're stopping in the middle of the main highway to sit there with a turn signal on," he explained. "If that person behind them is not looking or paying attention, they're going to run right into the back of them."

Joplin says he would like to have a town hall meeting to discuss ideas with the community, however, because of the pandemic he's encouraging people to reach out to him or Schaefer.

To find out how to reach Constable Joplin, click here.