Have you noticed any small birds or robins near your home? 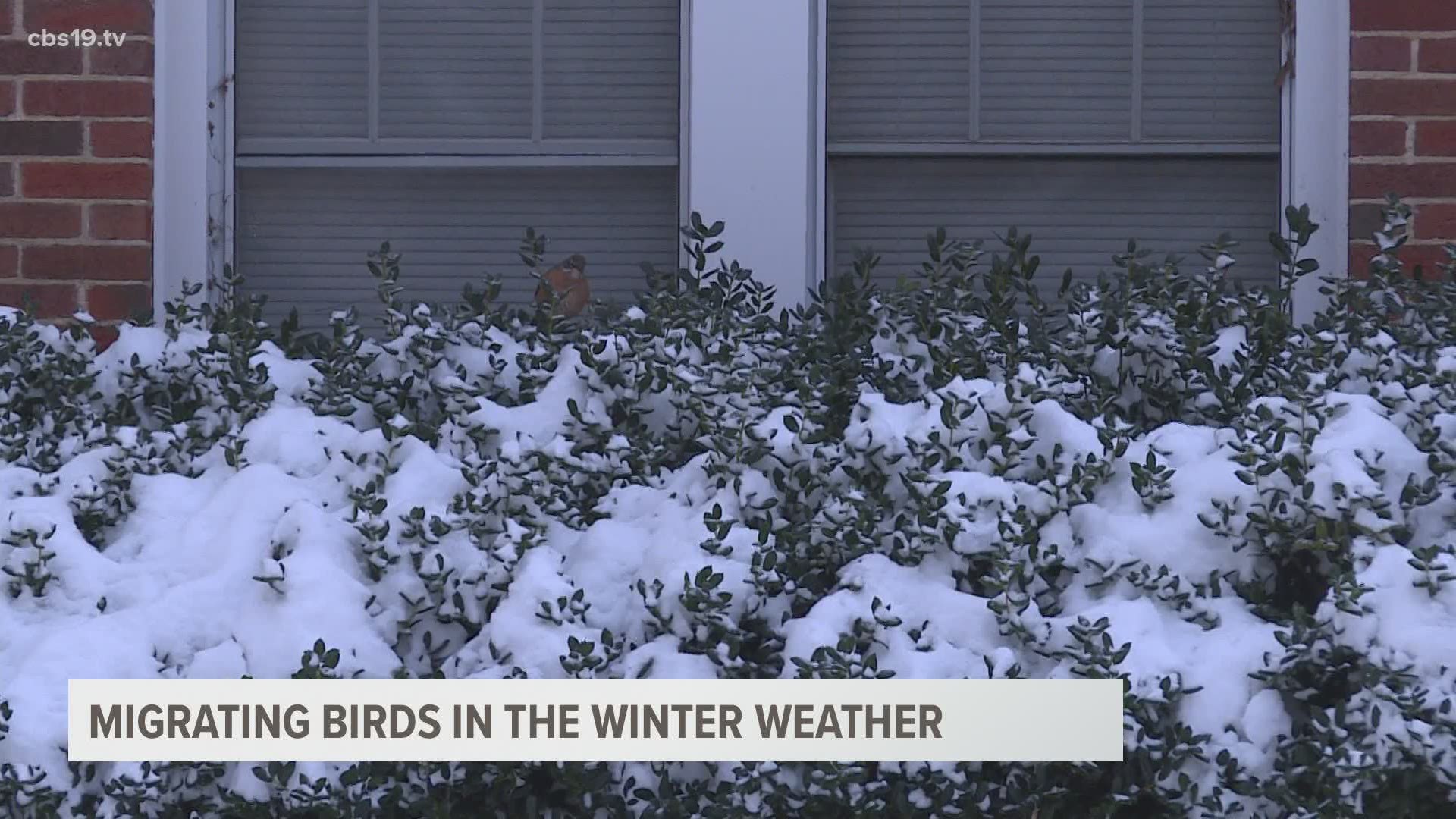 TYLER, Texas — Many viewers are noticing small birds and robins taking refuge near their homes or porches during these icy weather conditions.

According to Texas Parks and Wildlife Department (TPWD), the snow and ice make it difficult for small birds to find food and water.

"The snow is bad enough but when you get a coating of ice you can’t penetrate the ice to get to the ground even the seed-eating birds," Roger Wolfe, district wildlife leader at TPWD, said.

Wolfe says many of the birds that are impacted are insect-eating birds.

"Ones that are, eat wheat, grain, seed, things like that are way more adaptable in these kinds of conditions," he said.

A recent post on the Nicholas Pet Haven Facebook page left many chatting and posting their own photos of birds that took refuge in their garages, porch, shops, and even a convenience store.

The post has more than 800 shares and advises people if they find a robin needing shelter to feed it seed, mealworms, and water.

TPWD says many of the birds are capable of surviving the temperatures than others.

"A lot of small birds don’t have body mass and to handle sub-zero temperatures for extended periods of time, so there are certain birds that are way more capable of surviving things than others," Wolfe said.

Wolfe says many may be migrating their way out of the region.

TPWD says the best thing to do, if you can, is to leave out fresh water that is not iced-over, and to fill up your bird feeder if you have one.

"Bird feeders, obviously make sure to keep them full if they’re kind of going to that for a source of food and all of a sudden you left it without food for two or three days, they may have trouble finding other places to find food," he said.

Wolfe says the icy weather conditions may result in a slight downturn in population but that nature is capable of taking care of itself.

"Usually what you have is you get higher reproduction rates, survival rates, I mean because there is less competition for food, you know, nature kind of heals itself in many ways," he said.

Are you noticing an increase of migrating birds that are seeking shelter on your porch or near your home? They may be trying to get out of the cold and warm up! Send me your pics! #easttexas #birds #icyweather #snow #robins #robin Photo Courtesy: Nicholas Pet Haven @kytxcbs19 pic.twitter.com/cbXp9Vq5ym