Student-athletes from across East Texas inked their national letters of intent. 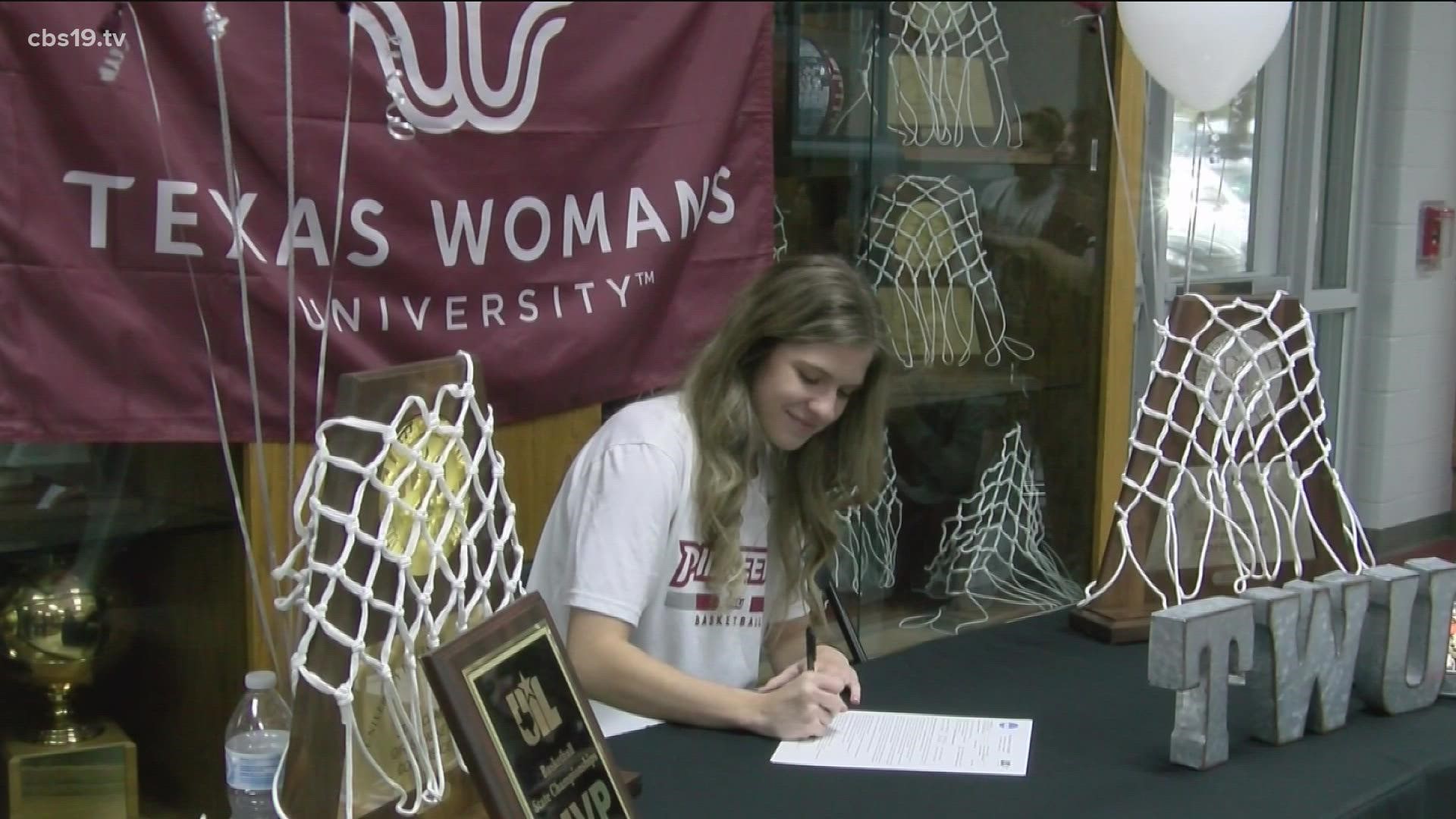 TEXAS, USA — Wednesday was national signing day across where student-athletes from across East Texas inked their national letters of intent to compete at their sport of choice at the next level.

The day started at Tyler Legacy with first-team all-district infielder, Cooper Hill. He's taking his talents to the University of Houston. In his last season with the Red Raiders, Hill hit two home runs, two doubles, two triples and 10 RBI's, scoring eight runs. When asked about what this day means to him, Hill says this is something he's been working towards since kindergarten.

"It makes you look back and see all the hard work you put in since 5 years old, Hill said. "All the little league, practices,  I'm a little nervous but I'm ready for it."

Then there's his teammate, Dakota McCaskill, who is committed to North Central Texas College.

He's a three-year letterman who we like to call a swiss army knife, meaning whatever position coach Boxley needed him to play. He slid right in without a hitch.

"I just started pitching last year and so as a freshman, I didn't even touch the mound," McCaskill said. " And so I mean, throughout the years, they've prepared me to do all types of things whether it's a pitch to play first base or you know, even focus on in the classroom, but just motivation really. I'm finally where I want to be so, but I'm not done working. So, yeah, the hard work doesn't stop the work even gets harder."

Onto to a bigger ball, smaller mound, Tyler Legacy's Madelyn Flanery is advancing her softball career right here in East Texas at Letourneau University. Like McCaskill, Flanery can also be used anywhere on the field. She was named the defensive player of the year in their district, making first-team all-district two years in a row. She also puts in work on the academic end, finishing in the top ten percent of her class.

When asked why she decided to stay close to home, her answer was simple.

"It's a beautiful, beautiful school," Flanery said. "And I've always wanted to stay close to family want to go to college, always want to be in state. But this is even better because I just I've always valued my family because I've put so much energy and time and money into my sport. And now that I get to go to a school that's like pretty close to them. I can stay close to home and I get to play the sport I love it's just perfect for me."

Onto a program known to hold the second-longest winning streak in Texas girls' high school basketball history, Martin's Mill, where their starting point guard has made a decision on what program she'll likely impact as soon as she arrived on campus.

With her top choices being UT Tyler and Abilene Christian University, Jada Celsur decided to head to Texas Women's University.

As a state champion and the recipient of the 2019 state championship MVP, Celsur says being at a basketball powerhouse has prepared her for the next level, but she's also focused on her education. She plans to major in physical therapy.

Griffin was so talented, she was already being recruited as early as the 8th grade. She was originally committed to the University of Nebraska but ultimately made the decision to stay a little closer to home.

Bullard high school is home to one of the best soccer goalies in all of the piney woods, Emily Clark. She inked her national letter of intent Wednesday afternoon to play for the lady patriots of UT Tyler.

A handful of other student-athletes from across East Texas signed their letters as well.

Sabine's Callie Sparks will sign on and play at UT Dallas while Huntington senior Emma Tatum signed her national letter of intent to play at Kansas.