One year later: A look back at the legacy Trooper Damon Allen left behind 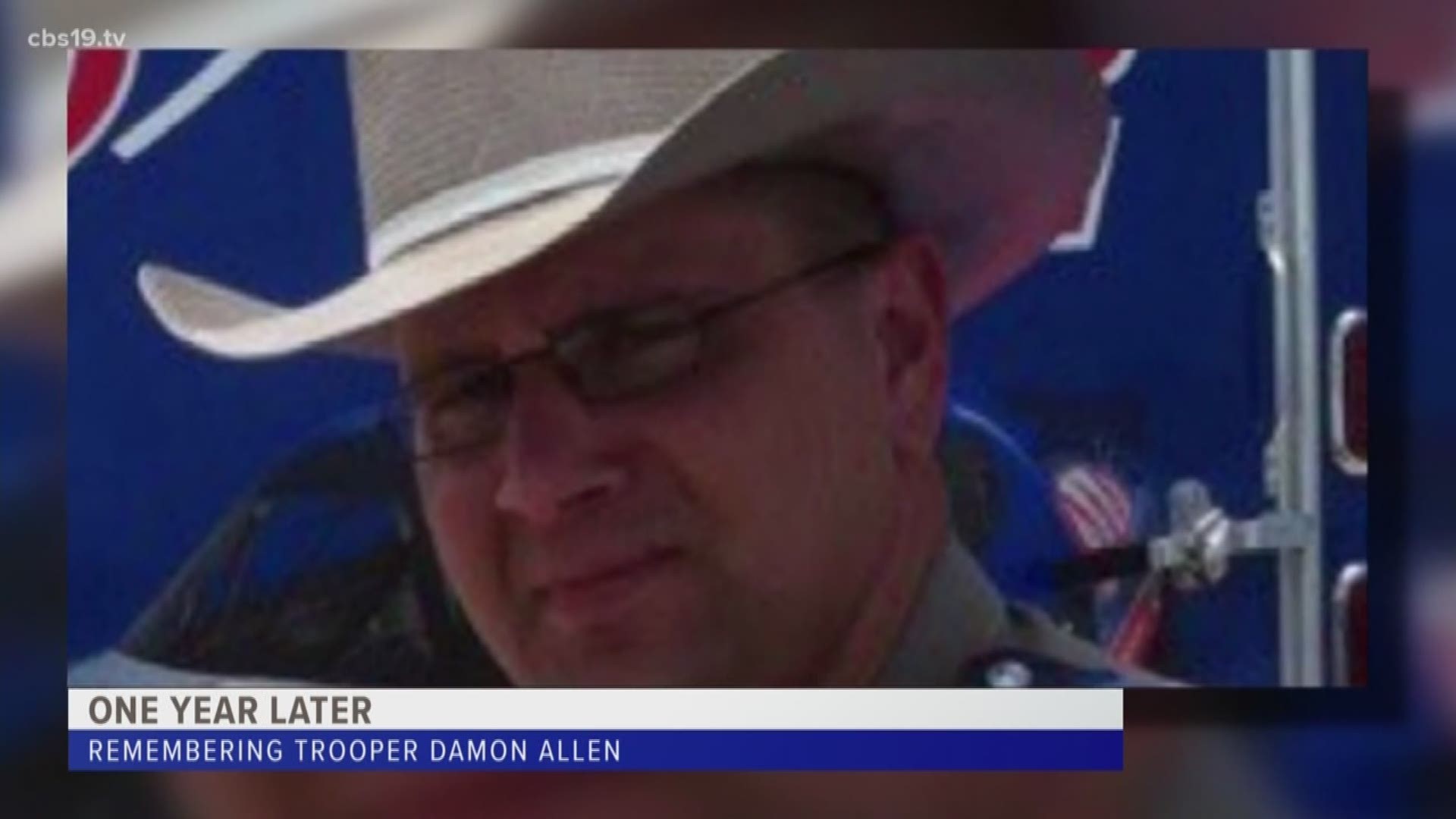 Texas — It happened one year ago.

Texas State Trooper Damon Allen was shot and killed by DaBrett Black on Thanksgiving 2017 during a regular traffic stop.

Black then fled the scene, being captured by law enforcement hours later, one hundred miles away from where he shot the state trooper.

Blacks' actions left a woman without her husband, children without a father, and a widespread community of law enforcement reeling.

The circumstances surrounding Trooper Allen's death sparked a call for change across Texas. A change the troopers' widow, Kasey Allen, has been fighting for since his death.

"upset, confused, extremely angry, you want to know what happened," Kasey explained to CBS19 just a few months after her husband's death.

Kasey says, "there are a lot of people to blame in this scenario," speaking about the chain of events before Thanksgiving that contributed to Trooper Allen's death.

"The system failed her. It failed that trooper. And my office, the decisions of one of my prosecutors played a part in that," Smith County District Attorney, Matt Bingham said.

In 2015, Black beat a Smith County Deputy, and attempted to take his gun. He was arrested and charged with a felony that was later reduced to a misdemeanor by Bingham.

In July of 2017, just a few months before shooting the Trooper, Black fled from police and led the officers on a high speed chase before purposely ramming into a deputies car.

"I seen him come around the corner and i gunned it to get off the road and he swerved and turned off his lights and hit me," the Deputy explained.

Black showed no remorse when speaking with law enforcement about the incident, "the way I look at it, it's another lawman down instead a black man down except he's still walking away with his life."

Bingham says it was in this case that one of his prosecutors violated long-standing office policy by cutting a deal to plead the case down to a misdemeanor without getting permission.

"He shouldn't have been out for this reason that the severity of the offense he committed in 2015. He should have been in the penitentiary for that. Period," Bingham explained.

Prosecutor Jacob Putnam was the man who made the deal.

"You prosecute him to the fullest extent of the law," Kasey said, "and if that's what he would've gotten he wouldn't have been allowed to be out to pull the trigger."

She's been pushing for new legislation to reform the Texas bail system.

She even went down to Austin for a meeting with Governor Gregg Abbott. Months after that meeting the Governor announced the Damon Allen Act.

"This must be done to prevent anymore deaths," the Governor said during the announcement at the press conference.

Sitting next to Kasey, Governor Abbott explains why the reform is needed, "despite a previous conviction for assaulting a peace officer, the man who turned out to be Damon's killer was released back out onto the streets by a justice of the peace who said, and I quote, "I wasn't aware of a previous conviction."

In the proposal, the Governor said bond amounts would be set to better match the threat of accused criminals including making sure the accused criminals full criminal history is known, requiring only judges and not lower-level magistrates to set bail for dangerous criminals, and also adding safety of law enforcement as a consideration when setting bail.

"There have been those that target law enforcement. The only shock was that it was my husband," Kasey said.

It's up to legislatures to take up the act in the next legislative session which begins January 8th.