Chelsea Laury said seeing change around the country inspired her to try to change Longview for the better. 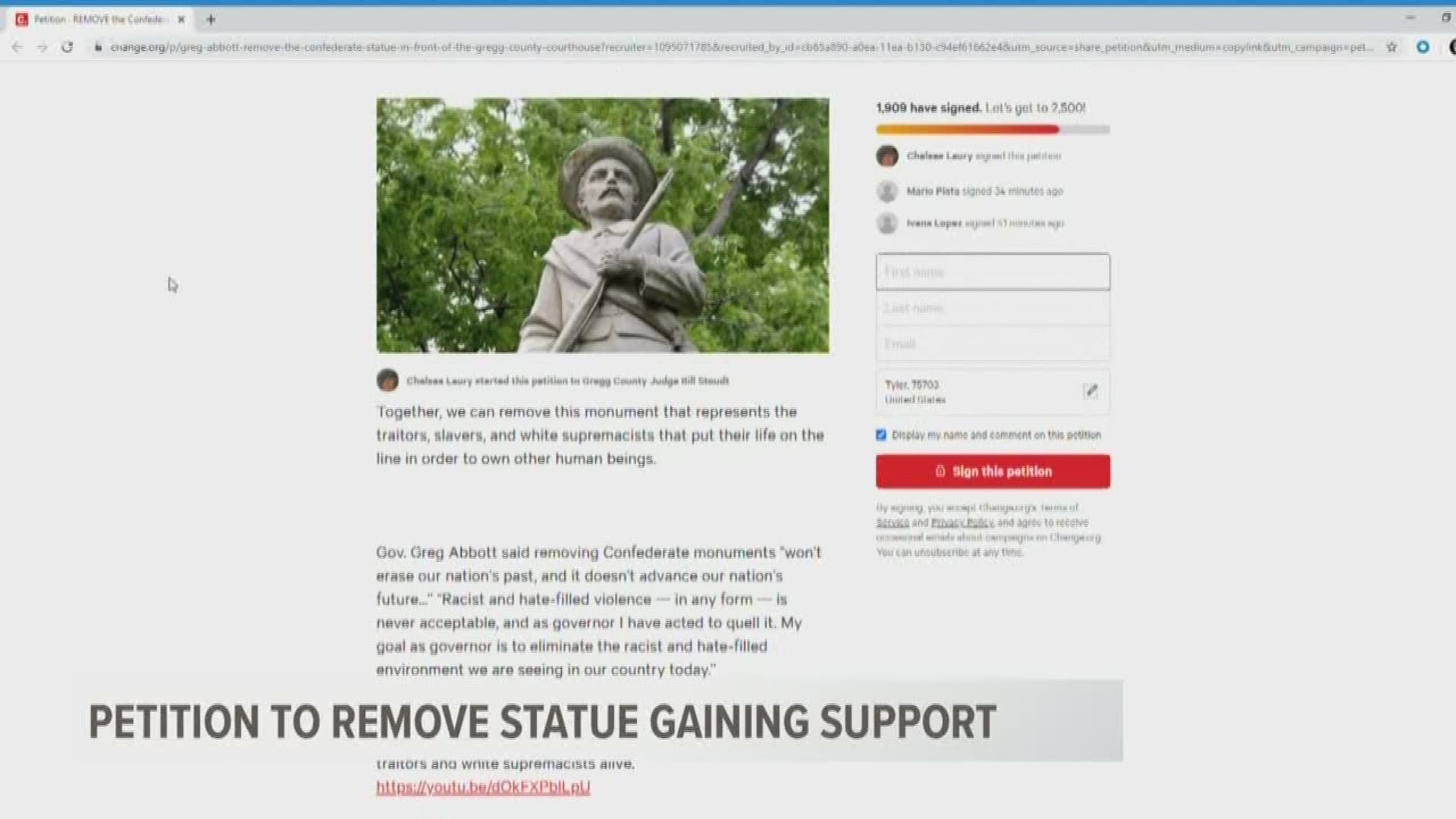 LONGVIEW, Texas — A college student who wants to become a psychiatrist is testing the attitudes and behaviors of Longview.

Chelsea Laury started a petition to remove the confederate statue from the grounds of the Gregg County Courthouse.

“Seeing that statue, like, at first, I mean, I had to kind of do a double-take at first,” Laury recalled, “because I was like, ‘Is this real?’”

Laury says she was born in Houston and her family moved to Longview when she was in middle school. When she first noticed the statue and talked to her mother about it, Laury said her mom warned her that is just “how Longview is.” She called the statue another symbol of the racism she suffered while growing up in Longview.

“Hearing about how we should be, how black people should be grateful that the slave trade happened, and we’re not stuck in Africa,” Laury said. “Things like that. Yeah, it’s really blatant in Longview. It’s a lot of, I mean, I’ve heard a lot of cotton jokes. Just a whole bunch of things in Longview that I’ve never even imagined could even come from people that are still doing this today. I feel like it’s never gone away, really.”

Laury says she was inspired by the moment and the possibility of change. She watched as other cities, even in other countries, took down statues representing the Confederacy and slavery. She wrote a petition aimed at the county judge, and by Monday evening, nearly 2,000 people had signed it.

“People were supporting me, and I was really shocked, because, every time I’ve spoken my mind about these things in Longview, it’s always been, you know, I’ve never really gotten the support that I’ve gotten, as much support as I have now," Laury explained. "It makes me hopeful that there are some people, some people that care, and really, it shows me that this isn’t what Longview is. It’s not just a bunch of, like, you know, white supremacists. So, it made me hopeful to see all of the support.”

County Judge Bill Stoudt chose not to comment to CBS19 about the petition or the monument. However, this issue stretches far beyond Gregg County. According to the Southern Poverty Law Center, there were 68 monuments to the Confederacy around Texas as of 2019, fourth most of any state in the country. The City of Dallas recently won a court case to take down a Confederate statue. Gregg County is, itself, named for a Confederate officer, and there are several buildings and streets named for Confederate soldiers or politicians such as Robert E. Lee and Jefferson Davis.

Will Guzmán, a history professor at Prairie View A&M University, says the Gregg County statue, which was built in 1911 after a donation from the United Daughters of the Confederacy was part of a wave of monuments built as the last surviving Civil War soldiers were dying. The statues also served as a reminder of the Jim Crow laws that led to segregation and persecution in the South.

“They were very strategic in order to resist the Civil Rights Movement,” Guzmán stated.

Guzmán explained that the monuments not only signify slavery to the black community but serve as a reinforcement of white supremacy and a reminder in the government’s role in preserving both.

“I think, when you look at this state’s ugly history—not only regarding the institution of slavery, but also the resistance to the Civil Rights Movement—it becomes a shameful history that should not be privileged or honored,” Guzmán said.

Another statue outside the Gregg County courthouse celebrates veterans of all wars. Laury and Guzmán both say they want the government to celebrate people who fought for The United States and for freedom, rather than those who fought on the side of slavery.

“You don’t have to keep memorials and statues up where they are,” Laury sais. “I mean, that’s like saying, that’s like saying we can put the ‘whites only’, why take the ‘whites only’ signs down? Well, because that’s history. You can put them in a museum. Take pictures of it, put it in a history book. Put it in websites. Show people an example of what not to do, or how not to be any more, because history has a habit of repeating itself if we don’t know what’s going on and what’s happened.

“And I feel like it’s really important to remember history, but we don’t have to celebrate it in the streets. Public art has power.”

Laury is getting ready to go to college in New York in the fall, should the COVID-19 pandemic allow it. Seeing the confederate monument come down would make her much prouder to call Longview home.

“That,” she said, “would completely change my perception of Longview and East Texas to where it would—oh my God, I’m about to cry. It would make me feel so safe in this community.”

When reached on the phone, Sam Mercer, commander of the John Gregg Chapter of the Sons of Confederate Veterans, says his group is planning a petition of its own to urge Judge Stoudt and the county commissioners to keep the statue where it is. He argued the statue has nothing to do with race or slavery.

He said that, whether they fought for the North or the South, all soldiers in the Civil War were Americans, and the sacrifice from each deserves to be recognized.