A group of Pine Tree High School seniors learned their band director was about to sell his favorite instrument and came up with a plan so that wouldn't happen. 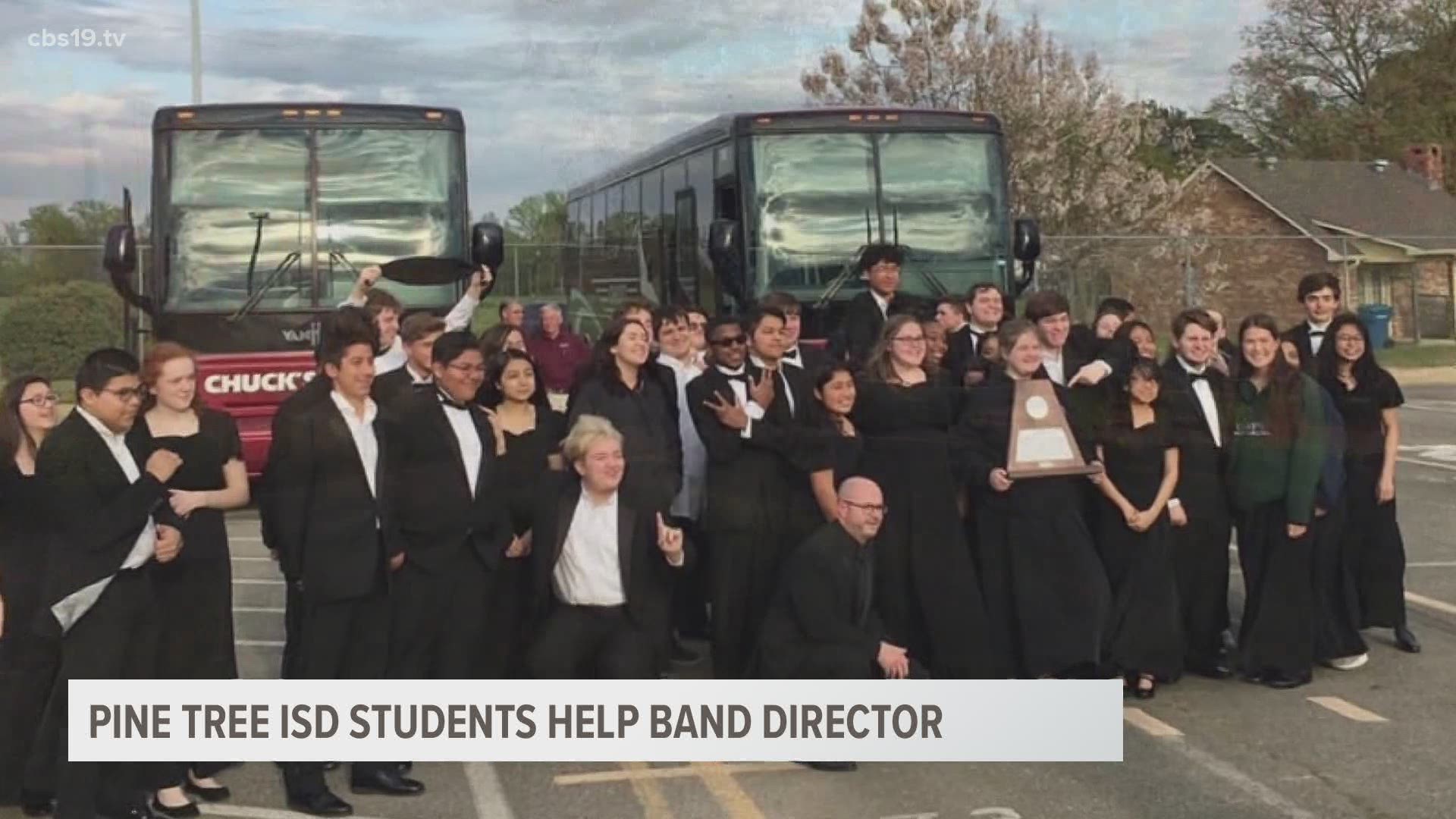 LONGVIEW, Texas — Owning an instrument is a goal for many musicians. It was one Pine Tree ISD Band Director, Aaron Turner, had just accomplished when he bought a euphonium earlier this year. So when his high school band students saw it for sale, they knew they had to take action.

Albert Ruiz saw the instrument listed on Facebook this weekend and contacted the other band seniors with a plan.

The group put everything together and had the Turner Family Funds GoFundMe page up by 10 a.m. on Monday, Nov. 9. Ethan Sanders says the students figured there would be some donations, but what happened left them all shocked.

"By 8 p.m. on Monday, we had raised over half of our goal, like $5,000," Sanders said. "It feels amazing to be able to not only give back to someone who has been such a huge part of our lives, but it feels great to get together and unite over a common goal with this many people."

The Pine Tree band seniors share a special bond with Turner, who started at the school district as a middle school music teacher six years ago, before becoming the high school band director in 2017. Students like Byanka Juarez say the teacher has become a father figure to them over the years.

"His first year as headband director, it was our freshman year so I got to meet him more," Juarez said. "I was so used to him being here like his dad jokes and stuff like that are so much fun."

As the students enjoy their senior year, unfortunately, Turner has been absent for most of it. In April, he was confirmed positive for COVID-19. While he has recovered, he's still suffering from lingering health issues.

“Mr. Turner has always been there, constantly just giving us everything he has, as far as like, his time, his love his support," Sanders said.

The students hope with more than $8,000 of the $10,000 goal reached already, Turner will be able to focus on making a full recovery.

The band director and some of the seniors were reunited Thursday, Nov. 12 briefly. He says he's not happy with the GoFundMe account's creation, but he's taking a note from his students.

"When I or anyone else stands in front of the band, I do something and they respond," Turner said. "So today, it has been turned around and they have done something, and I think it is just time I sit back and respond.”

The teacher and high schoolers were full of smiles and laughter as they spent some time together, something they all hope to be able to do more of.

As for Turner's prized euphonium, he says it's not going anywhere and it will now remind him of his band seniors from the Pine Tree Class of 2021.

"I could not possibly sell it now," he said. "We joked about this, I’m pretty sure now that eventually, I will [be] buried with it.”

RELATED: 'It fills my heart' | 11-year-old on a mission to provide diapers to families in need

RELATED: 'One dance with dad?' | COVID-19 cancelled her prom. That's when her father stepped in.