The protests reached their peak in Tyler Monday with roughly 200 people. There has been no violence at any of the previous demonstrations. 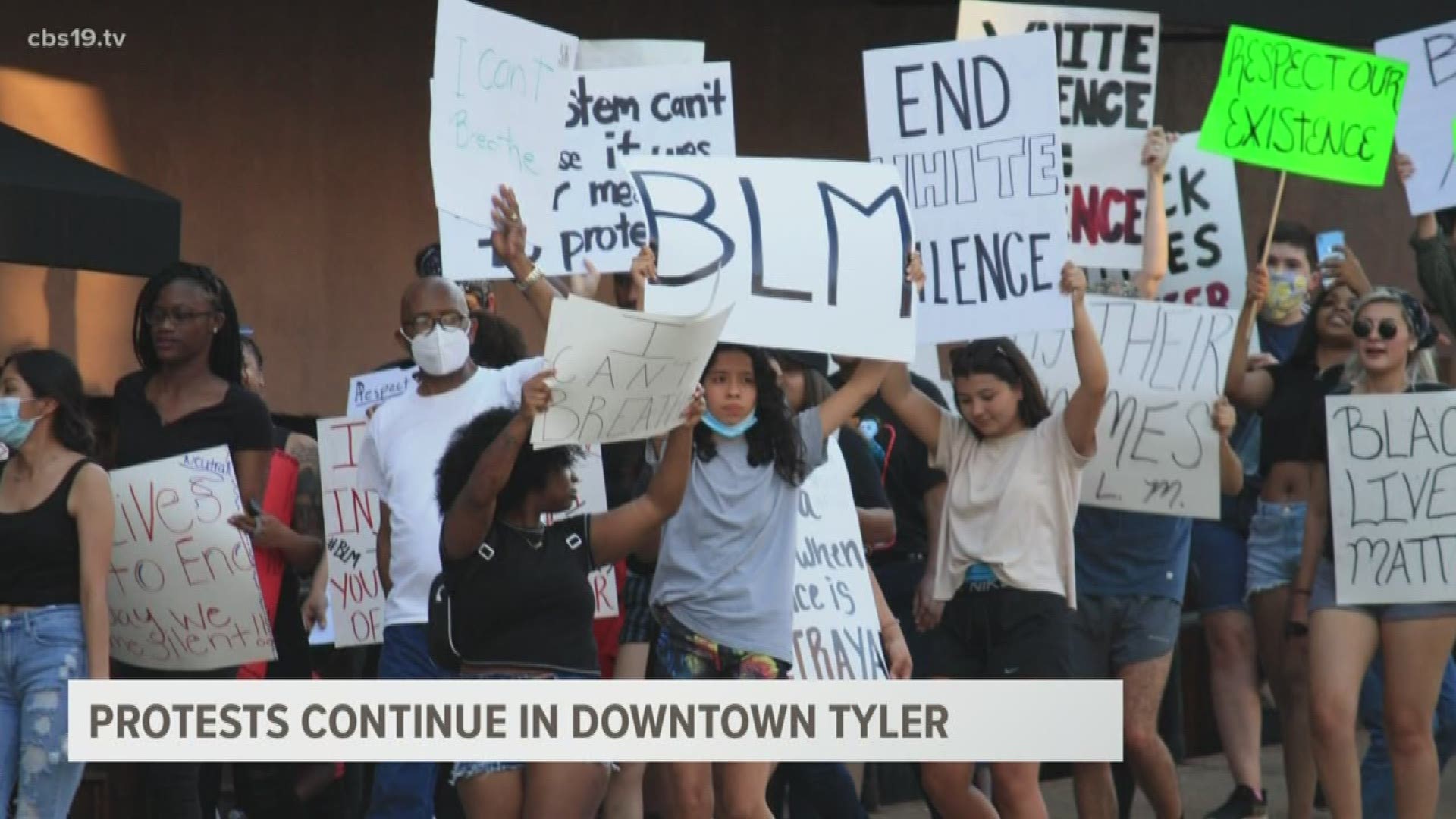 TYLER, Texas — Protesters have gathered at the Square in downtown Tyler for a fourth consecutive day.

The protest in downtown peaked at well more than 100 people. That number has decreased to a few dozen as of 10:15 p.m.

Earlier in the day, more than 100 people gathered for a prayer vigil at noon. Several local officials including Mayor Martin Heines, Judge Nathaniel Moran Commission JoAnn Hampton and local clergy appeared at the event to peace, unity and justice. 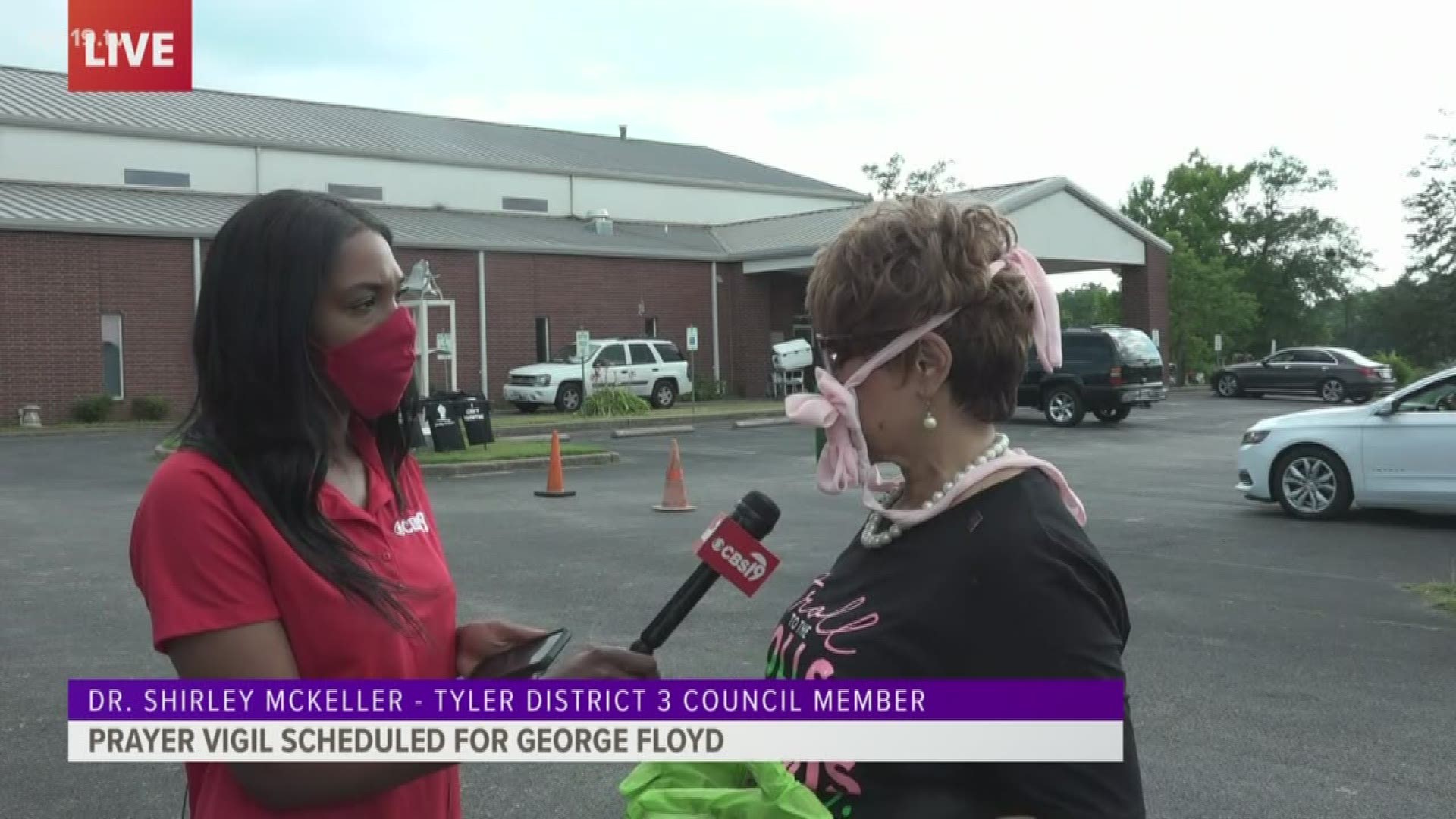 Protesters say they hope to continue to hold demonstrations at the square until all four officers involved in George Floyd's death are in jail. So far, only Derek Chauvin, who had is knee on Floyd's neck for more than eight minutes, has been arrested.

At about 6 p.m., there were roughly 20 protesters. However, many of them were setting up for the rest of the demonstrators who would arrive later. There is a table with food and water for those that come out.

By 7 p.m., the crowd swelled to about 55 people. The crowd spread out along Broadway Avenue on the Square. As with the previous days, the crowd held signs reading "Black Lives Matter" and "I can't breathe!" The crowd has continued to chant the words that Americans have come to know over the past week.

Around 55 protesters are here so far, every 10 minutes it seems as if 10 more people show up. #TylerProtests @kytxcbs19 pic.twitter.com/sPBIPnNkqk

The crowd began to march along Broadway Avenue. Several cars honked their horns in support of the protesters.

Tyler police do have officers in the area. Mayor Martin Heines says police are there to ensure the protection of the protesters.

📹HAPPENING NOW📹: For the fourth consecutive day, protesters are marching down Broadway Avenue in Tyler.

However, as the protesters returned towards the Square, the mood became tense a person in a car at an intersection shouted at protesters, who also shouted back. A male entered the intersection in front of the vehicle. When the light turned green, the car began to move forward. A second protester pulled the man from the road, and the car pulled away without further incident.

Things got a little tense as protesters arrived back at the square. A woman in a car began yelling at protesters. @kytxcbs19 #TylerProtests pic.twitter.com/lLP81qiICk

At about 7:45 p.m., the Tyler Police Department began to block off some roads for the protest. A short time later, Smith County Sheriff Larry Smith came out to the Square to speak to the growing crowd.

"I'm here genuinely and legitimately to thank [the protesters] what they're doing," Sheriff Smith said to the media later. "This is a protest. This is not a riot. [Law enforcement] will 100% protect their right to protest."

WATCH: CBS19'S FULL INTERVIEW WITH SHERIFF SMITH AT THE PROTEST

After addressing the crowd, Sheriff Smith marched alongside some of the protesters around the square, speaking to some of them as they walked.

Meanwhile, the majority of the crowd around him chanted George Floyd's and Breona Taylor.

Meanwhile, the crowd began a fourth march of the night. This time, the protesters set up at the intersection of Broadway Avenue and Front Street. By then, the crowd had grown to well above 100 people.

The protesters again held their signs up, including a large Black Lives Matter banner that had been at previous demonstrations. The banner was displayed in front of the barricade while the protesters remained on the sidewalks.

By the time the protesters returned to the Square, some of the protesters discussed the possibility of moving to nearby Bergfeld Park, about two miles away. However, that idea was dismissed.

As of 9:40 p.m., about 80 protesters were still on the Square. However, they had mostly finished marching for the night.

No longer seems like protesters are trying to leave the square. Around 80 people still here #tylerprotests @kytxcbs19 pic.twitter.com/GD577ZudYi

The crowd continued to thin to about 20 people at around 10:30 p.m. There were no violence or major traffic problems throughout the protest.

After three days, there remains no violence from protests in the city. Organizers have had conversations with local law enforcement to ensure the safety of the protesters and to prevent of violence. Police have said protesters are welcome on the square as long as they remain peaceful.

The protests peaked on Monday, with roughly 200 demonstrators marching, chanting and holding signs.

This story will be updated throughout the night.